Austrians aged 14 and over who refuse Covid vaccines will be fined £1,000 per month as Vienna rolls out a jab mandate to last until 2024

Austrians aged 14 and over who refuse Covid-19 vaccinations will be fined £1,000 per month as Vienna rolls out a jab mandate to last until 2024.

The country’s conservative-led government on Thursday announced the details of its plan to make coronavirus vaccines compulsory, as the country prepares to to end its lockdown on Sunday, that was announced last month.

Roughly 68 percent of Austria’s population is fully vaccinated against COVID-19, one of the lowest rates in western Europe. Many Austrians are sceptical about vaccines, a view encouraged by the far-right Freedom Party, the third biggest in parliament. 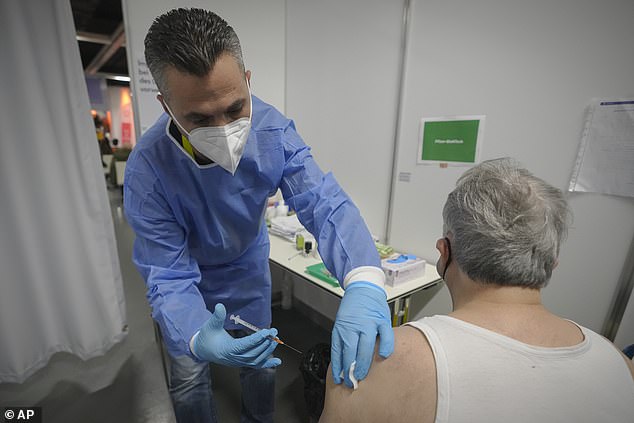 Austrians aged 14 and over who refused Covid-19 vaccinations will be fined £1,000 per month as Vienna tolls out a jab mandate to last until 2024. Pictured: A man is given a Covid-19 vaccine in Vienna, Austria on November 23 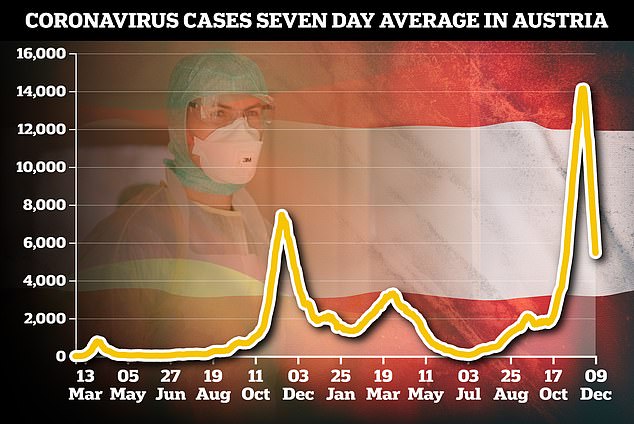 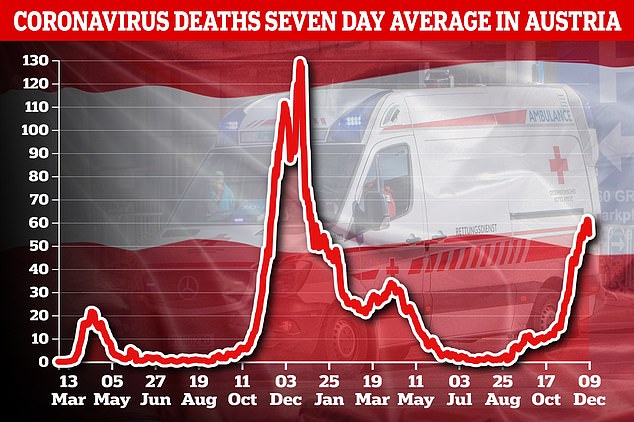 As infections set records three weeks ago, the government announced a fourth national lockdown and said it would make vaccinations compulsory for all, the first European Union country to do so.

People’s income and other financial obligations will be taken into account in calculating fines. Alternatively, officials can opt to impose a fine of up to 600 euros (about $680) in shortened proceedings.

Authorities will write to unvaccinated people every three months reminding them to get their shots or get a doctor to certify their right to an exemption before the next cutoff date.

If they continue not to comply, fines can be imposed every three months. Proceedings will be dropped if people produce proof of vaccination in the meantime.

‘We still have an obligation and a need to increase vaccination coverage so that we don’t go from lockdown to lockdown, next year as well,’ said Karoline Edtstadler, the Cabinet minister responsible for constitutional issues. 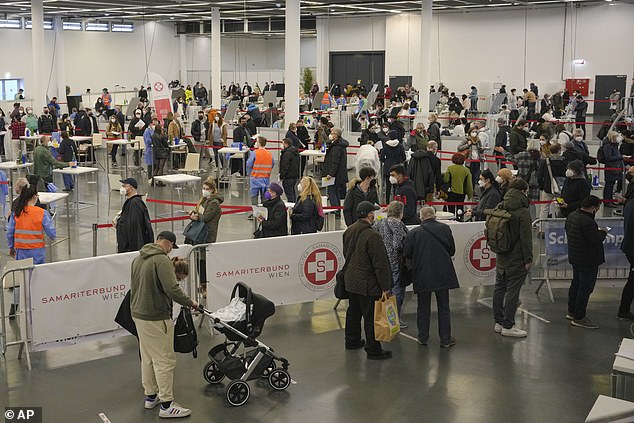 People wait in lines to register for COVID-19 vaccination on the second day of a national lockdown to combat soaring coronavirus infections, in Vienna, Austria, Nov. 23, 2021. Roughly 68 percent of Austria’s population is fully vaccinated against COVID-19, one of the lowest rates in western Europe. Many Austrians are sceptical about vaccines, a view encouraged by the far-right Freedom Party, the third biggest in parliament

‘There are still well over a million Austrians who aren’t vaccinated. That is too many,’ she added, speaking during a new conference with Health Minister Wolfgang Mueckstein.

‘I say very clearly that we don’t want to punish the people who aren’t vaccinated. We want to bring them along, we want to convince them of this vaccination and we want them to show solidarity with everyone so that we can regain our freedom.’

The vaccine mandate, which must be approved by parliament, is due to start in February and last through January 2024. Two opposition parties support it, suggesting it will pass easily.

There will be quarterly vaccination deadlines, Mueckstein said, adding that the authorities will check a central vaccination register to see if members of the public are in it.

‘If that is not the case, proceedings will be brought. In regular proceedings the amount of the fine is 3,600 euros,’ Mueckstein said, adding that fines would be means-tested.

‘As an alternative, the authorities have the option to impose a fine in shorter proceedings immediately after the vaccination deadline. 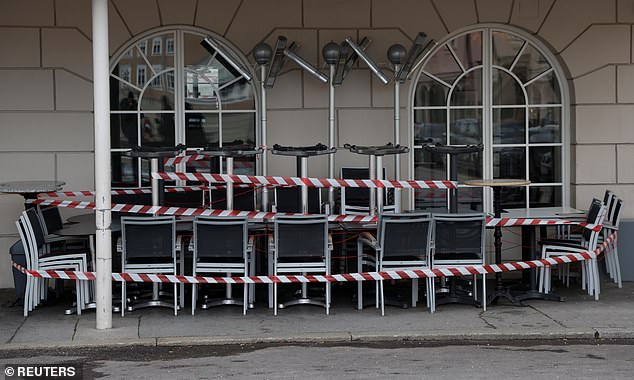 Seats and tables of a closed cafe are seen during the fourth national coronavirus disease (COVID-19) lockdown in Salzburg, Austria, December 8, 2021. Austria’s lockdown – announced last month – is set to end on Sunday after cases fell

‘Here the amount of the fine is 600 euros,’ he said, adding that if this was not paid it would lead to regular proceedings.

The announcement from Austria that it would introduce a general vaccine mandate came on November 19 – at the same time the government decided to lock down the country to curb a surge of new infections.

The country’s seven-day infection rate has declined during the lockdown. It stood at 432.6 new cases per 100,000 residents on Thursday, down from more than 1,100 on the day the lockdown started.

Austria’s government announced on Wednesday that it would let a wide range of businesses, from non-essential shops to theatres, restaurants and hairdressers reopen when its COVID-19 lockdown ends on Sunday, but many regions will open up more cautiously. 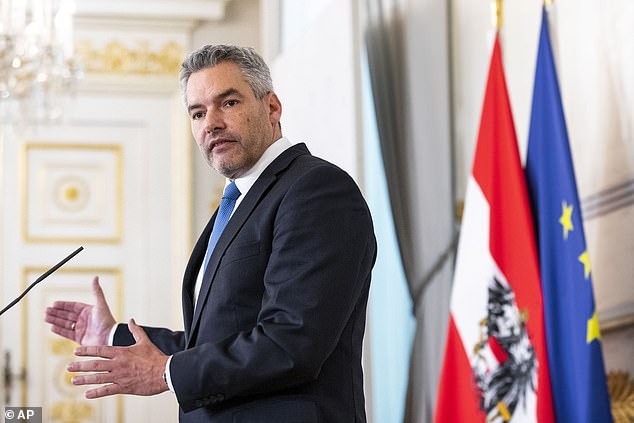 The new Austrian Chancellor Karl Nehammer speaks at a news conference about his plans for the upcoming weeks in Vienna, Austria, Tuesday, Dec. 7, 2021

Austria has cancelled its famous Vienna Opera Ball for the second year running over the coronavirus pandemic, the government said Wednesday.

Keeping the February 24, 2022 date would have sent ‘the wrong signal’ as the country is only to start emerging from a partial lockdown this Sunday, state secretary for culture Andrea Mayer said.

‘The Opera Ball is typically the kind of event at which social distancing is impossible,’ she told the Austrian news agency APA.

The ball, a major event in Austria’s cultural calendar attended by the country’s political and economic elites as well as foreign celebrities, was also cancelled last year over the Covid-19 pandemic.

Before that, it was called off during the 1991 Gulf War.

The event usually attracts thousands of guests, with ordinary tickets costing 315 euros ($350) and circle boxes available for 23,600 euros ($26,700), according to the Vienna Opera’s website.

The move means switching from a single set of rules for the whole country to a patchwork varying between nine provinces.

Adding to the confusion, those opening up the fastest included the western provinces of Vorarlberg and Tyrol, which have the highest and fourth-highest infection rates in the country.

Vorarlberg and Tyrol are Alpine provinces that rely heavily on winter tourism. Hotels across Austria have been closed to tourists during lockdown, though ski lifts are open.

Austria went into lockdown two weeks ago to counter a surge in daily coronavirus infections to record levels.

Infections have plunged but intensive-care bed occupancy is still rising.

The government pledged when the lockdown was introduced that it would last no longer than 20 days, until this Sunday.

The list of businesses that can reopen from Sunday applies provided the local province is not keeping tighter restrictions. The province of Upper Austria, which long had Austria’s highest infection rate and borders both Germany and the Czech Republic, plans to stay in lockdown until Dec. 17.

Vienna will only let cafes and restaurants fully reopen a week after the national lockdown lifts, while non-essential shops and Christmas markets will reopen from Monday. Austrian media said three other provinces would take a similar approach, only letting hotels and restaurants reopen on Friday, December 17.