Beirut: Despite a public outcry for change, Lebanon’s President has tapped Saad al-Hariri, the embattled former prime minister who stepped down late last year amid anti-government protests, to again try to form a government.

Hariri, who left office amid multiple crises as the country teetered on economic collapse, received the mandate after garnering enough support from Parliament on Thursday. President Michel Aoun asked Hariri to try to cobble together a governing coalition, the office of the presidency said. 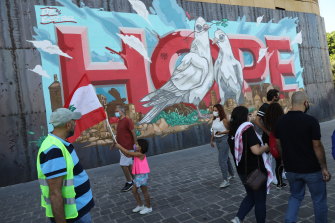 People walk past graffiti painted on the wall of a Beirut hotel damaged by the August 4 explosion. Lebanon remains mired in crisis.Credit:AP

There is no guarantee he will succeed. Lebanon remains mired in crisis, its economy in shambles, as it also struggles with the fallout from an August 4 explosion in the port of Beirut that killed nearly 200 people, caused billions of dollars in damage and devastated entire suburbs.

Hariri vowed to form a cabinet of experts and technocrats "away from political parties" that would be committed to financial and economic overhauls to make the country viable again and to rebuild after the blast.

"This is the only and last opportunity for our beloved country," he said at the presidential palace.

Hariri's return would represent the staying power of Lebanon's longstanding sectarian power brokers despite the public's desire for a change of political leadership even before the Beirut blast, which amplified those demands. 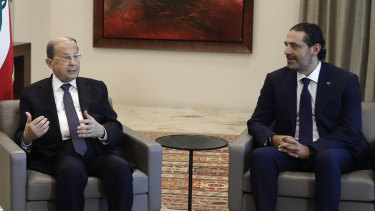 Lina Khatib, the head of the Middle East and North Africa Program at Chatham House, the British international policy institute, said that Hariri's being tapped again for the role was no surprise.

"The irony in Hariri's nomination now is that it takes Lebanon back to square one," Khatib said. "Just over a year after the start of protests in Lebanon, the country finds itself with the same prime minister who was ousted by the protesters, making the kinds of promises that he had made in the immediate aftermath of the protests and failed to implement back then."

Despite this, Khatib said the situation had fundamentally changed since a year ago. The economic crisis has become more acute, exacerbated by the pandemic and the port blast, and that could put more pressure on the governing elite to accept a degree of compromise they previously had not. 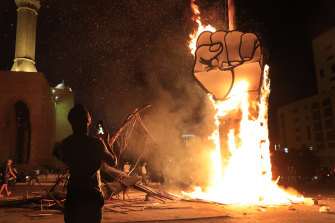 A protester takes pictures of a protest symbol that was set on fire by the supporters of former Lebanese Prime Minister Saad Hariri, after a small demonstration denounced his potential return as PM.Credit:AP

"This of course is not going to satisfy those protesters who were hoping for a complete overhaul for the political system in Lebanon and for wide-ranging fundamental reforms," she said.

While Hariri's opportunity to form a government comes with little promise to rescue the country from collapse, some Beirut residents say it is better to have a dysfunctional government than none at all.

Hussein Ayoub, a butcher watching the news on a television in his shop in western Beirut, seemed resigned to whatever the political outcome might be.

"Hariri won't be the best option," he said. "But I would say better to be half-blind than fully blind. The country is falling below hell."