Denpasar: A fire has been raging for than 24 hours at a major waste dump on the tourist island of Bali, generating a plume of thick smoke several kilometres long and causing breathing difficulties for locals.

The fire, at the Suwung final dump site, began just after 11.20am local time on Monday and is believed to have been started by methane gas at the landfill heating up and igniting. 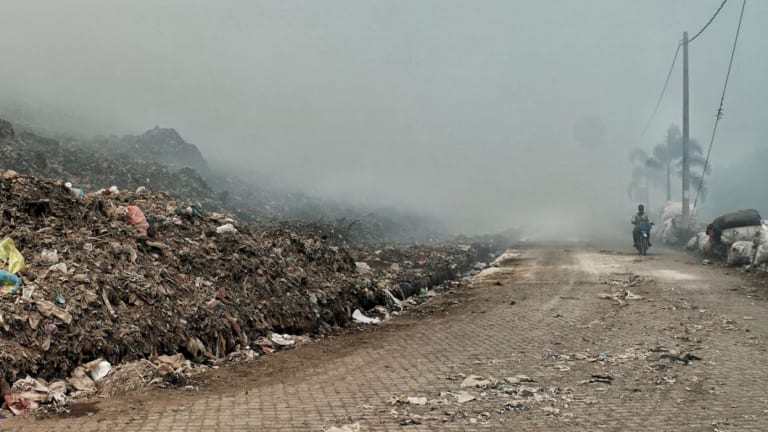 A scooter drove through the thick smoke from the Suwung dump site fire.

It's not the first time the waste dump, the largest one on the island, has caught fire this year and the blaze underscores just how poorly waste disposal is handled on Bali, and in Indonesia more broadly.

Only a tiny fraction of the garbage generated in Indonesia is recycled, and there is a lack of regulation over waste disposal.

At the same time, many of Indonesia's rivers are used to dispose of rubbish, industrial waste and even untreated sewage. The Citarum river, in West Java, has been dubbed the most polluted river in the world. 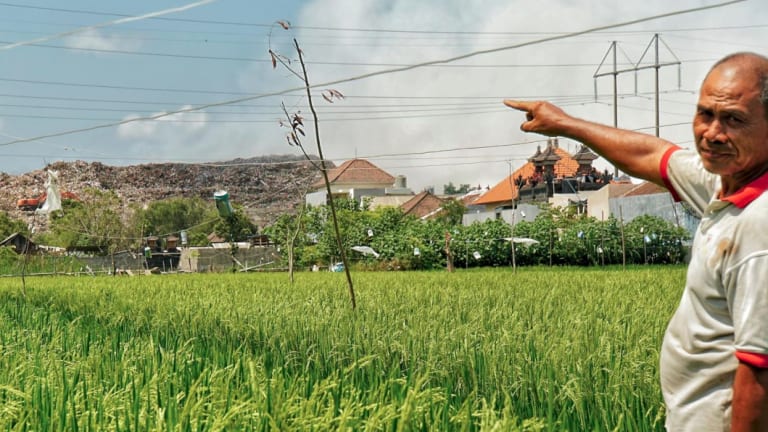 Wayan Mega pointing to the smoke from the dump.

Greenpeace Indonesia's Ahmad Ashov Birry said the open dumping and burning of waste was still widespread in Indonesia, and other parts of south-east Asia.

Wayan Mega, a local farmer who lives less than 10 metres from the dump site and grows rice, said the smell from the fire was awful.

"The smell was so strong, it was thick [smoke], sometimes black sometimes white. We don't know what kind of garbage they have up there, it could be from medical waste. It's all mixed," he said.

"Other then the obvious smell, [there are] health problems. We can't use water from our well. It's been contaminated, (waste water) must've leaked underground." 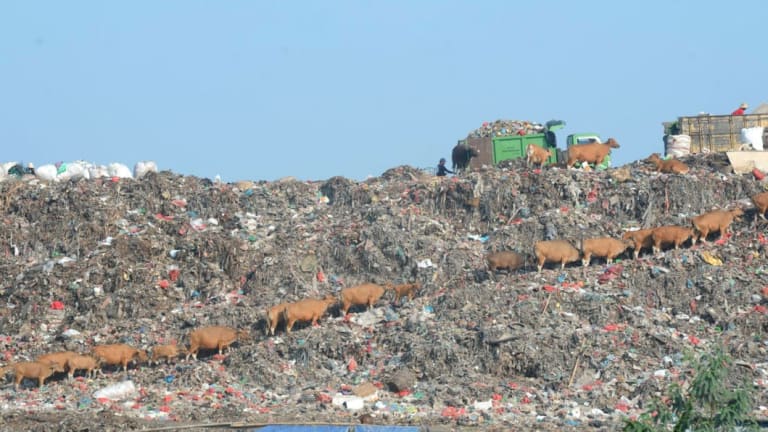 The dump on a clear day: cattle grazing.

Nevertheless, Mega said his rice field was unaffected because it was supplied with water from a different source.

Many nearby local farmers let their cows and pigs run free over the waste dump to look for food.

Faturahman, a worker at a plastic waste collection company across the street from the dump, said all the workers were sent home because "the smoke was unbearable, our eyes hurt, we can't breathe, we were also of course afraid the fire will spread out to our place. We couldn't work anyway yesterday, it was so thick we couldn't see what we were doing".

Joni Ariwibawa, the head of the Denpasar Disaster Management Agency, said four fire trucks were handling the fire, with another four offering back-up. 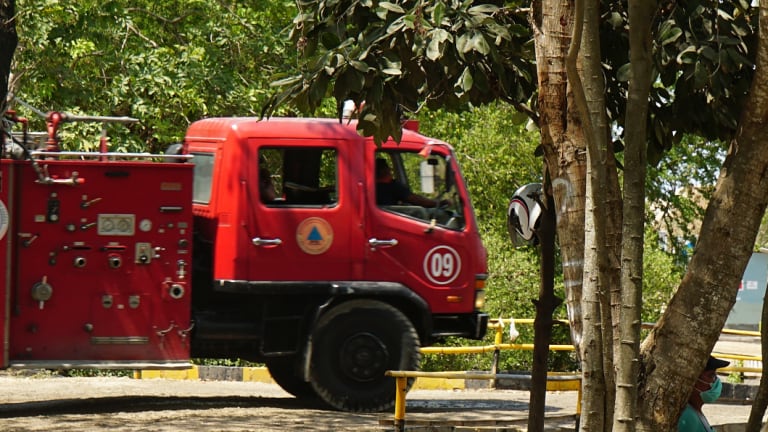 A firetruck entering the dump site after re-filling its tank.

"We responded yesterday, around noon. We still have four trucks here, still reloading water and going to the site. We will be here until we are sure the fire is completely put out," he said.

"We don't suspect any foul play, we suspect the fire was caused by the methane gas."

Wayan Sudiasa, who works at the dump site, said a feasibility study was underway to turn 22.46 hectares of the dump site into an eco park, while the remaining 10 hectares would be used for waste incineration and power generation.

"We hope to have it up and running in 2021. The current landfill will be covered by geo-membrane, the methane gas will be handled, then trees and garden will be planted. It will be turned into a forest, no more landfill."