Bamboozled! Experts warn gardeners about the menace of the trendy plant that can shoot up by 5ft every year leading it to be labelled ‘the new Japanese knotweed’

It has become a fashionable adornment in borders and beside ponds in many suburban gardens.

But bamboo could be the ‘new Japanese knotweed’, experts have warned.

It can grow by 5ft in a year and reach heights of 18ft in Britain, overwhelming gardens and blocking out neighbours’ light like leylandii. 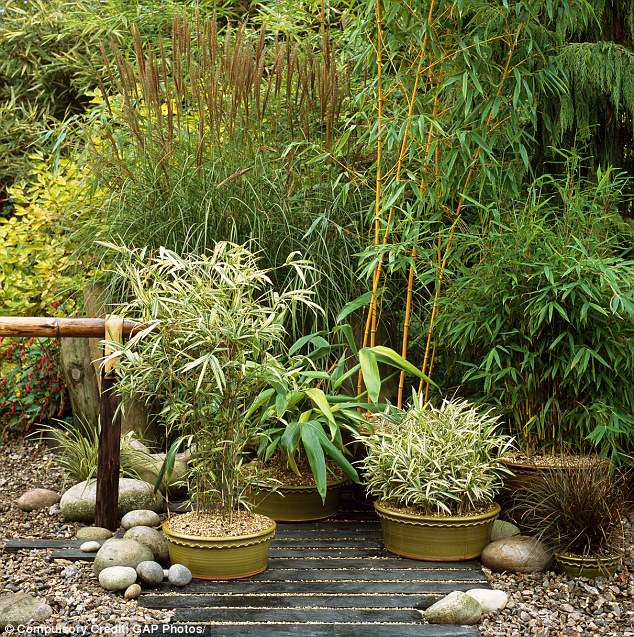 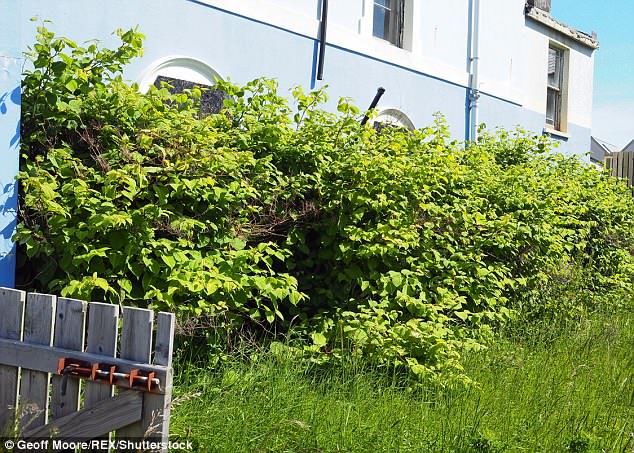 And just like invasive Japanese knotweed, which lowers house prices and puts up insurance, some types of bamboo are extremely difficult to get rid of once they have spread.

Gardeners try in vain to dig bamboo up or cut it back, only to see it return the next season.

It is also feared that bamboo, which has spread from gardens to 40 sites in the Sussex countryside, could pose a threat to native plant species, as knotweed does.

The Property Care Association has raised the issue by presenting a garden planted with bamboo in the Great Pavilion at Chelsea Flower Show. The Enemy Within garden is dedicated to invasive non-native plants, and also includes buddleia, Himalayan balsam and montbretia.

‘People who plant bamboo as a screen find it grows into the neighbour’s garden. We have seen someone move house because of bamboo next door which was blocking out their light. 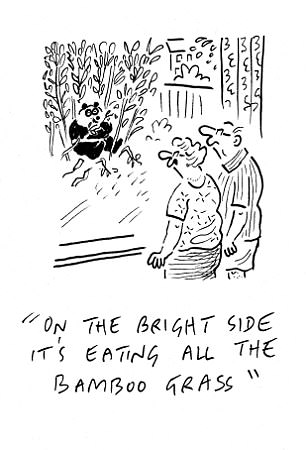 Pandas can eat 83lbs of bamboo a day

‘People don’t realise just how fast some types of bamboo can grow, and it’s an increasing problem.’

Bamboo, which originates in East Asia, came to Britain in the 1800s, but has become particularly fashionable in the past decade. Japanese knotweed was introduced to Britain in the middle of the 19th century, but it did not become a serious problem until around 1940. To prevent a similar problem with bamboo, experts are asking gardeners to ‘think before you plant’.

There are 15 to 20 species available in garden centres but the ‘running’ types of bamboo can take over a garden rapidly. These can grow 3ft to 5ft feet in height a year, with more established plants shooting up even faster.

And their rhizomes – underground plant stems – can spread more than 28ft horizontally and produce roots. People who want to have bamboo in their gardens are advised to choose ‘clumping’ rather than ‘running’ varieties, and to plant it in a container, instead of a flowerbed.

Some bamboo can grow to up to 130ft

The tallest bamboo, recorded in the Tropics, was reportedly 130ft.

Bamboo is the fastest growing plant in the world and can achieve up to 35in a day, a rate of 0.00002 miles per hour, in the Tropics.

It has little nutritional value – pandas have to eat up to 83lb a day to meet energy needs.

Bamboo is a member of the grass family and occurs naturally on every continent except Europe and Antarctica.