In the first fully-contested elections in the country for 10 years, there have been local reports of 16 people being killed in election-related violence.

This is despite the deployment of 600,000 security officials, including army and paramilitary forces, across the country.

In the run-up to the election, both the ruling party and the opposition complained of attacks on supporters and candidates. There have also been allegations of arrests and the jailing of thousands of opponents of incumbent Prime Minister Sheikh Hasina, who is seeking a third consecutive term.

“We urge the election commission to void this farcical result immediately,” he said.

“We are demanding that a fresh election is held under a neutral government as early as possible.” 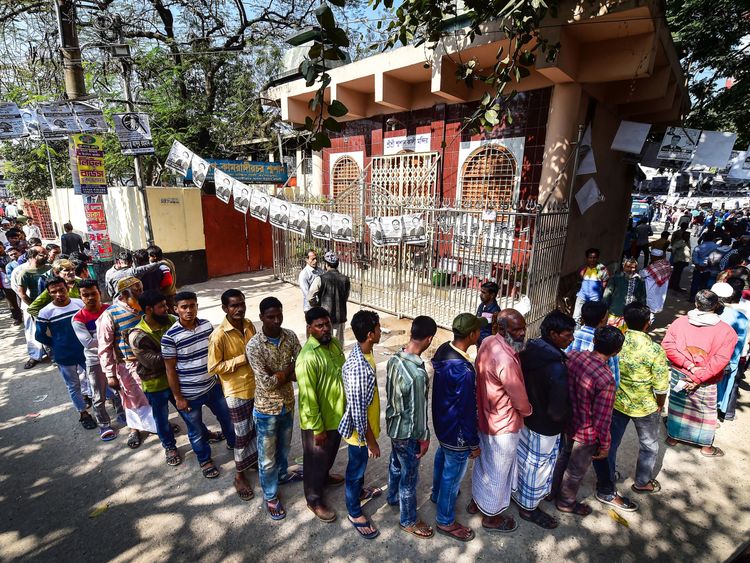 Mr Hossain claimed about 100 candidates from the opposition had withdrawn from their races during the day, with his alliance to decide on its next steps at a meeting on Monday.

There have also been complaints from opposition supporters of intimidation and threats, and being forced to vote in front of ruling party officials inside polling booths.

“Some stray incidents have happened. We have asked our officials to deal with them,” said K.M. Nurul Huda, Bangladesh’s chief election commissioner.

Bangladesh’s elections are being viewed as a referendum on what has been criticised as Ms Hasina’s increasingly authoritarian rule.

Her main rival is ex-prime minister Khaleda Zia, the leader of the opposition Bangladesh Nationalist Party, who a court deemed ineligible to run for office because she is in prison for corruption.

Both Ms Hasina, the daughter of Bangladesh’s first president, and Ms Zia have been in and out of power – and prison – for decades.

Bangladesh, a country of 165 million people, is holding its 11th general election since its independence in 1971.

At Bangladesh’s last elections in 2014, the BNP boycotted the vote claiming it was not free and fair.