Bangladesh rescued about 280 Rohingya from Bay of Bengal, sending them to flood-prone island amid safety concerns. 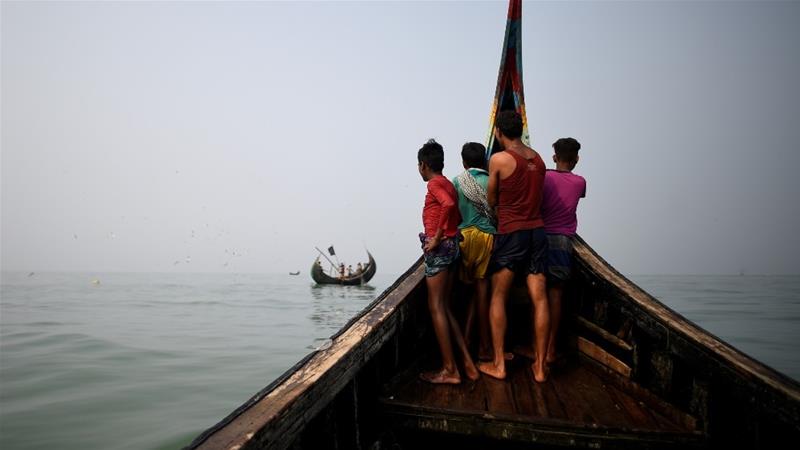 The Bangladesh navy has rescued about 280 Muslim-majority Rohingya from the Bay of Bengal, towing their stranded boat to an island where they will be quarantined as a precaution against the coronavirus, coastguard and naval officials said on Friday.

Rights groups and aid agencies have raised their voice against the transfer of Rohingya to the flood-prone Bhasan Char island in the Bay of Bengal.

The rickety wooden boat was spotted early on Thursday in Bangladeshi waters and taken to the low-lying island off the southern coast, where the government has built housing and cyclone shelters.

“They were starving and we have given them food and water,” one naval officer said, speaking on condition of anonymity.

“The plan is to keep them in home quarantine for 14 days. Later, the government will decide.”

The navy and coastguard are on alert for other boats in Bangladeshi waters, unable to find their course as the seas turn rougher due to a change in season.

Telephone calls to government officials for comment by Reuters News Agency were unanswered.

Last weekend, 29 Rohingya found on another vessel adrift at sea were also taken to the island, which now has electric lighting and cellphone towers.

Another boat that landed on the coast of Bangladesh in mid-April was packed with hundreds of starving and emaciated Rohingya. Survivors said several dozen died on board during weeks at sea.

Late last month a top United Nations official urged Bangladesh to let two stranded boats with hundreds of Rohingya refugees on board land amid mounting fears over their fate.

“Why you are asking Bangladesh to take those Rohingyas? They are in the deep sea, not even in Bangladesh’s territorial water,” Momen said, adding that there are at least eight coastal countries surrounding the Bay of Bengal.

Back in February, Bangladesh appeared to be backing off plans to settle Rohingya refugees on Bhasan Char, having come under fierce criticism from the UN and aid agencies.

But the subsequent coronavirus scare appears to have persuaded Bangladesh authorities to at least use the facilities on the island for quarantining rescued Rohingya.

More than one million Rohingya live in sprawling refugee camps in southern Bangladesh, most having arrived from Myanmar in late 2017 after fleeing a military crackdown that the UN said was conducted with genocidal intent.

The Myanmar army denies genocide and says it was carrying out a legitimate campaign against armed rebels who attacked police posts.

In January, the Hague-based International Court of Justice ordered Myanmar to take emergency measures to prevent genocide of the Rohingya, which faces widespread discrimination and have been stripped of their nationality.

Any outbreak of coronavirus in the camps, where people live in cramped, squalid conditions, would be a nightmare for aid agencies and the Bangladesh authorities.

For years, Rohingya, either wanting to escape persecution in Myanmar or the poverty of camps in Bangladesh, have made the perilous sea journey south in the hope of reaching Thailand or Malaysia.

In 2015, hundreds of Rohingya died after a crackdown in Thailand led smugglers to abandon their human cargo at sea.

The UN has urged authorities to let the boats land, but Southeast Asian governments have tightened their borders to keep out the new coronavirus. And even in mostly-Muslim Malaysia, sympathy for Rohingya refugees appears to have eroded.

Among the targets of anti-Rohingya vitriol was Zafar Ahmad Abdul Ghani, a Rohingya activist who had to deactivate his Facebook account after it was flooded with angry comments and death threats sparked by allegations he had demanded Malaysian citizenship for Rohingya.

Malaysia last month turned away a boat carrying 200 suspected Rohingya and has also arrested some people believed to be Rohingya for suspected trafficking of undocumented migrants. It has not said whether it would allow more Rohingya to enter the country.