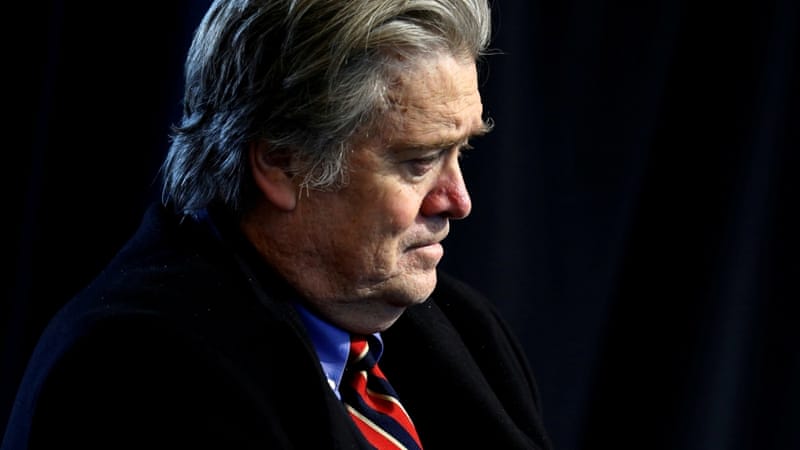 Stephen Bannon, former chief strategist to US President Donald Trump and former head of right-wing website Breitbart News, has become a prominent piece of the puzzle in the Mueller probe because of his connections to international players, including senior officials from the United Arab Emirates (UAE).

Bannon is widely viewed as the architect of Trump’s “America First” policy, which many have called isolationist and Islamophobic.

Bannon reportedly oversaw the writing of executive orders prohibiting US visas for citizens of several Muslim-majority nations, commonly referred to as the “Muslim ban”, which Trump signed at the beginning of his term.

Bannon was reportedly forced out of the White House in August. He said publicly that he remained committed to the Trump administration and briefly returned to Breitbart News.

Three months after leaving the White House, a company linked to Bannon began working on a UAE-funded, anti-Qatar advertising campaign.

The UAE, along with Saudi Arabia, Bahrain and Egypt, launched a land, sea, and air blockade against Qatar in June 2017, accusing Doha of funding “terrorism”. Qatar has denied the accusations.

SCL Social, the company that received the $330,000 contract in October 2017, has the same parent company as Cambridge Analytica, a controversial political advertising firm that targets Facebook users.

The National Media Council of the UAE paid more than $64,000 for advertisements on Facebook, Twitter and other social media services as shown by the contract, filed with the US Department of Justice.

Further filings show articles placed in news sources such as the Belgium-based New Europe, an independent tabloid that specialises in coverage of the European Union, as well as the UK’s The Independent.

The advertisements and articles featured anti-Muslim Brotherhood sentiment, a topic that Bannon spoke about at a day-long conference at conservative think-tank The Hudson Institute in October 2017.

Titled Countering Violent Extremism: Qatar, Iran, and the Muslim Brotherhood, Bannon said the blockade of Qatar was the “most important” political event in the world and read aloud 12 demands from Saudi Arabia, UAE, Bahrain and Egypt required before they will end the blockade.

These included designating the Muslim Brotherhood a “terrorist organisation”.

Bannon said he may not agree with “all” of the demands, but thought it was a “good construct” to being talks. He further expressed his disagreement with then-secretary of state Rex Tillerson for his approach to the blockade. Tillerson, who was fired in March, recommended the Trump administration adopt an even-handed policy regarding the Arab quartet’s accusations against Qatar.

Prince said in a hearing in the US Congress (PDF) that he knew Bannon “pretty well”.

The former Navy SEAL sent Bannon foreign policy position papers detailing his thoughts on world events that he expected were to be given to then-candidate Trump during the 2016 presidential election campaign.

Bannon sold his stakes in the companies in April 2017.

Prince was present at a January 2017 meeting in Seychelles with high-level UAE officials, including the Gulf emirate’s de facto leader, Mohammed bin Zayed.

The meeting, which took place before Trump was inaugurated, has become a key point of interest in the special counsel investigation.

George Nader, an adviser to bin Zayed and reported associate of Bannon, has testified to Mueller about the December 2016 Trump Tower meeting, as well as the January 2017 gathering in Seychelles.

Prince, who has a history of lucrative business deals with the UAE, also testified he met Kirill Dmitriev, head of Russia’s $10bn sovereign investment fund, in Seychelles.

Bannon was interviewed by the Mueller probe in February. He reportedly told investigators he would only answer 25 questions that were pre-approved by the White House.

Though he has remained silent about the three-hour interrogation, Bannon said in a September 2017 interview with US programme 60 Minutes that there’s “nothing to the Russia investigation. It’s a waste of time… Russian collusion is a farce”.

Bannon has not publicly commented on possible UAE influence on the Trump administration.

Other articles in this series

Mueller’s Web: The UAE-Trump Connection, an Al Jazeera interactive displaying connections between major players related to Trump and the UAE.

Who is George Nader, convicted paedophile?

Elliott Broidy: A history of bribery and pro-Israel advocacy

Kirill Dmitriev’s ties to Putin and the UAE

Erik Prince and the US Foreign Meddling investigation