Barnier says Britain WILL get ‘full control’ after Brexit

Michel Barnier boosted Theresa May today by saying Britain will get ‘full control’ after Brexit – but the transition could last an extra two years.

The EU chief negotiator sought to shore up the PM by praising the package – painstakingly thrashed out over nearly two years – as ‘fair and balanced’.

But he also risked fuelling the growing Tory revolt against Mrs May by suggesting the so-called implementation period could run until the end of 2022 – and the UK will have to pay more.

Mrs May tried to play down the issue of the transition extension today, saying she did not believe there were any circumstances when it would run beyond the next general election scheduled for May 2022. 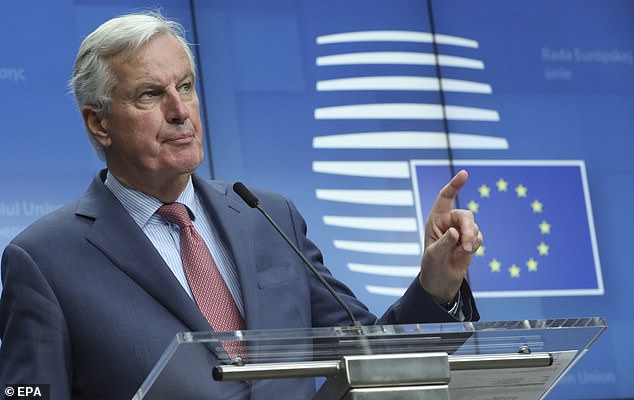 Under the terms of the draft divorce agreement, the transition is due to last until December 31 2021, but may be extended once only if it proves impossible to complete a full deal on future relations by that date, as an alternative to activating the so-called ‘backstop’ arrangements to keep the Irish border open.

The text of the agreement states that the period may be extended to ’20XX’ and it remains unclear whether this will be amended to show a fixed maximum date.

Mr Barnier has mooted the final date could be the end of 2022 – allowing negotiators nearly four years to strike a future trade deal.

But such a move would infuriate Brexiteers, as it would mean continued freedom of movement and paying membership fees of up to £10billion a year.

Mrs May has said she may ask for an extension to the post-Brexit transition period, which currently ends in December 2020, but only for a ‘few months’.

At a press conference in Brussels today, Mr Barnier said he had briefed EU ministers on the terms of the ‘fair and balanced deal’ struck at negotiator-level with Britain.

He said: ‘It takes into account UK positions, in particular we have formed a compromise to avoid a hard border between Ireland and Northern Ireland.

‘Both sides want to avoid being in the backstop.’

Mr Barnier said the EU still needed to agree its own internal processes for triggering an extended transition period but insisted the focus this week was on the future framework talks.

He said: ‘Discussions are ongoing today with UK negotiators. This is now our focus.

‘It will open the door to negotiate an ambitious economic and strategic partnership in future.

‘For the future relationship, both the UK and EU will have full control of their own legal rule making.

‘This is essential on our side for the integrity of the single market. It is essential for the UK in terms of taking back control.’

Mr Barnier said he did not know how much the UK would have to pay into Brussels coffers for the extra transition – although current annual contributions are around £10billion.

Asked at the CBI conference today about the idea of extending the transition, Mrs May said: ‘From my point of view, I think it is important in delivering for the British people that we are out of the implementation period before the next general election.’

According to one diplomat at yesterday’s meeting, member states voiced their approval to extend until December 2022 to give ‘people and businesses certainty’.

The diplomat said: ‘You have to provide as much clarity because businesses and people are affected in their everyday lives.’ 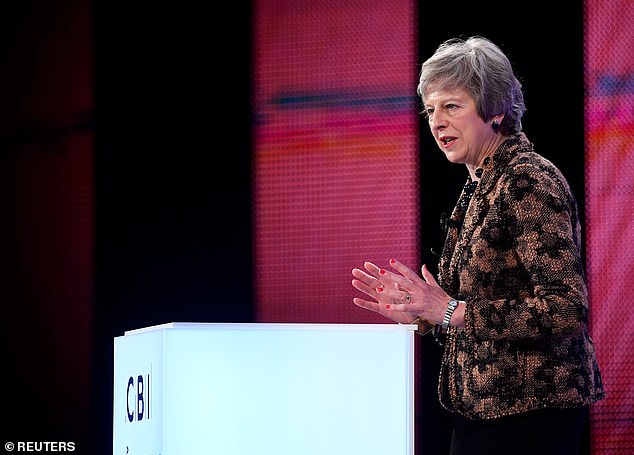 Mrs May has also said she may ask for an extension to the post-Brexit transition period, which currently ends in December 2020

As it stands, the transition period will begin on March 30 after leaving and last until December 2020.

The UK will be able to extend it in July 2020 if a trade deal is unlikely by the end of that year.

But the length of time has not yet been tied down and is the only piece of the agreed divorce deal left blank.

The withdrawal agreement states the transition period could be extended ‘up to 31 December 20XX’, with a date to be agreed and inserted before Sunday’s summit.

The diplomat added: ‘Michel Barnier proposed December 2022 and the member states were OK with that.

‘The British have not proposed anything as far as we know.’

Britain’s other option in July 2020 would be to switch to the so-called Irish backstop at the end of that year, which would mean leaving the single market but entering into a joint customs union which the UK could not unilaterally pull out of.

This would last until a trade deal is done which prevents a border emerging in Ireland.

Spain is also said to have raised concerns at yesterday’s meeting with Mr Barnier about the scope of the withdrawal agreement in relation to Gibraltar.