An amber “danger to life” rain warning has been issued for Scotland as heavy downpours continue to lash the UK. The Met Office warning for south west Scotland and Lothian Borders is in place until 3pm on Thursday. The Met Office stated: “Heavy rain is likely to cause some travel disruption and flooding. Homes and businesses are likely to be flooded, causing damage to some buildings. Fast flowing or deep floodwater is likely, causing danger to life. Delays and some cancellations to train and bus services are likely. Spray and flooding probably leading to difficult driving conditions and some road closures.

“A good chance some communities cut off by flooded roads. Power cuts and loss of other services to some homes and businesses likely.”

BBC weather forecast up to 100mm of rain to strike higher ground on Thursday and heavy showers across southern parts later in the day.

BBC weather presenter Sarah Keith-Lucas said: “It has been a very wet week so far, particularly across parts of England and Wales, where some places have seen two months worth of rain fall in just a few days.

“So flooding has been a problem. With more persistent rain in the forecast for several parts in the country in fact we have got flood warnings in force. 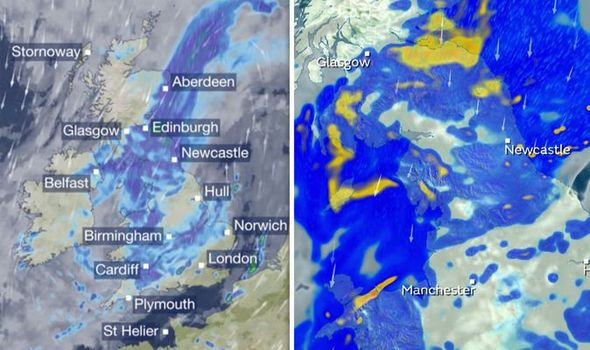 “Now during the day on Thursday the region we are most concerned about is this area in the south east of Scotland, the Met Office have issued an amber weather warning here for heavy rain which is likely to cause disruption with travel disruption and flooding likely as well.

“Now if we run the rainfall throughout the day on Thursday, it is going to be pretty relentless, just piling in from the north east, particularly heavy over the higher ground with up to 80mm to 100mm of rain falling here. Now across the rest of the UK in general there is a lot of blue on the map, another pretty soggy day.

“Some heavy rain across central parts of England, Wales, northern England, southern and eastern Scotland too. For the western side of Scotland and for Northern Ireland it will be a little drier with just the odd shower here.

“Some heavy showers developing across southern parts of England later in the day and temperatures only 11C to 16C. So it’s going to feel pretty chilly out there, still a bit of a northeasterly breeze blowing in the north and we could well see further flooding problems.”

For overnight and into Friday, the BBC weather host forecast: “The rain in the north does tend to ease a little bit, so it will dry up compared to the heavy rain of Thursday across many southeastern parts of Scotland. We could still have a lot of lying surface water across many parts of the UK, further showers through central parts of England, Wales too.

“Now low pressure doesn’t go anywhere in a hurry, as we head through the day on Friday it’s just going to be easing away a little bit towards the north west.

“Fewer isobars on the map so not quite as breezy as the weather we have seen over the past couple of days, but Friday is certainly not going to be a dry one.

“We’ve still got some heavy showers around across parts of England, Wales, and also further showers rolling in across western Scotland, Northern Ireland too.

“There will be a little bit of sunshine developing though by the time we get to Friday, especially in the afternoon and temperatures starting to rise up a little bit.

“So 13C to 19C typically during the day on Friday, but it’s still a fairy unsettled story.”

For the longer term outlook, Ms Keith-Lucas added: “Into next week still some showers in the north and west, should turn a bit drier and warmer towards the south east.”

There are currently no flood warnings or alerts in place for Northern Ireland.