The BBC has come under fire for its ‘inaccurate’ Bank Holiday weather forecasts that saw people cancel days out and businesses suffer.

Large parts of Britain basked in glorious sunshine last Monday (May 28) with temperatures of up to 84F (29C) and clear, blue skies.

But the BBC weather app predicted highs of just 62F (17C) and up to an 80 per cent chance of thunderstorms in coastal spots like Bournemouth and Brighton.

Tourism bosses were left fuming, claiming they missed out on important trade because people cancelled their plans. 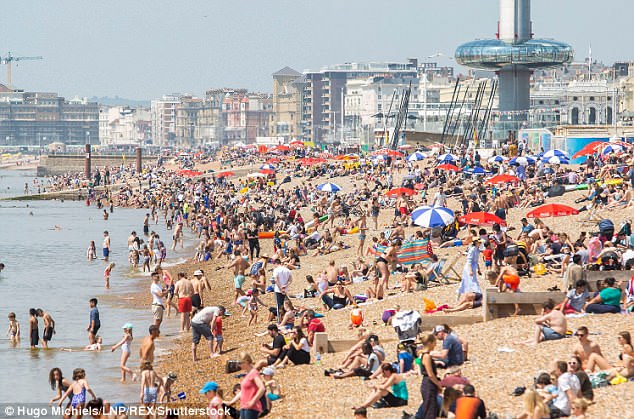 Despite BBC predictions, large parts of Britain basked in glorious sunshine last Monday (May 28) with temperatures of up to 84F (29C) and clear, blue skies. Pictured Brighton May 28

Jon Weaver, head of resort marketing and events in Bournemouth, Dorset, told The Sun: ‘The BBC predicted rain all morning for the Saturday. Their picture for the day was pretty awful. In the end we had blue skies and sunshine.

‘It’s so frustrating. It’s having a negative impact on businesses.’

The BBC stopped using the Met Office for weather forecasts in February, switching to MeteoGroup in a bid to cut costs. 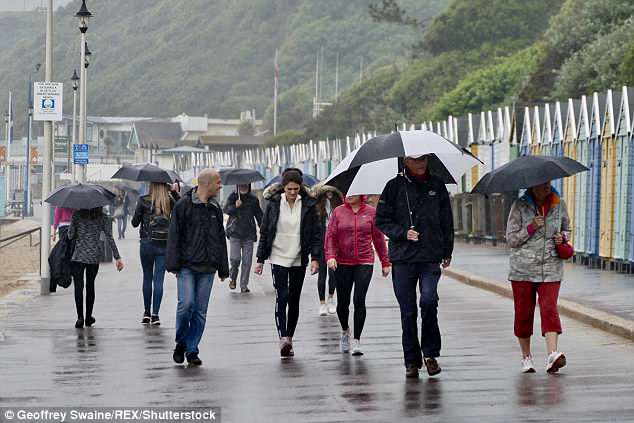 People took to social media to complain they stayed away from the beach and other beauty spots because of bad forecasts. Pictured poor weather on May 31 in Bournemouth

Many furious Twitter users blamed the switch for the ‘inaccurate’ forecasts.

One tweeted: ‘I was planning for a rainy bank holiday but the @metoffice won. This is what happens when you go for a cheap tender @bbcweather’

Another said: ‘I have checked the BBC weather every day over the bank holiday weekend and it’s said it’ll rain. Oh shocker they got it wrong again. It’s a lovely day in Brighton.’

One person claimed the BBC ‘ruined’ their day, posting: ‘@bbcweather I’m so angry with you! You’ve ruined this bank holiday with your c*** forecasting. We cancelled our day out because you said it would be thundering in Reading.

‘Nothing but blue sky all day. Total incompetence!’ 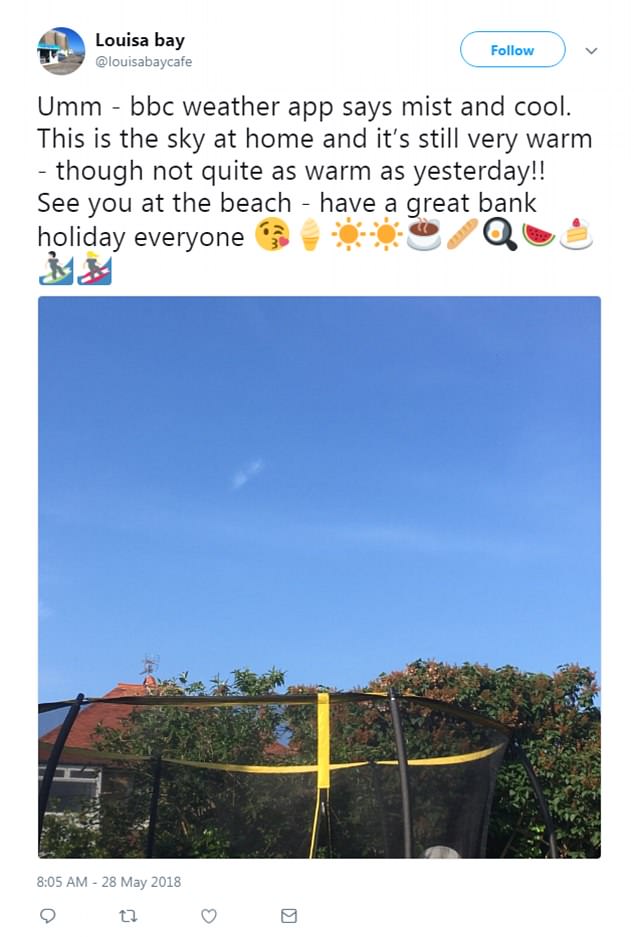 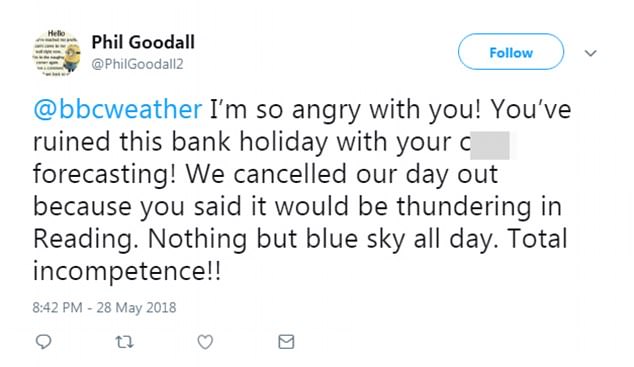 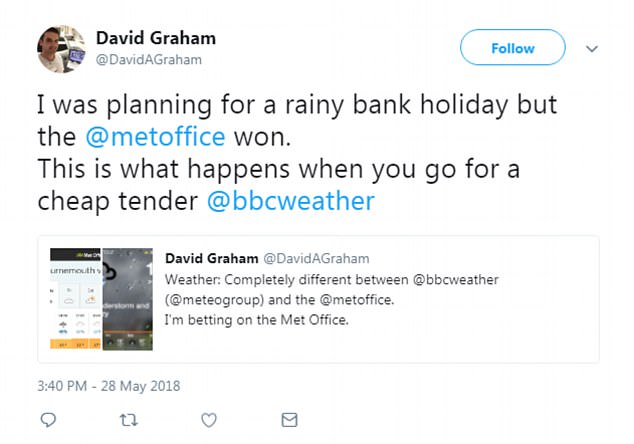 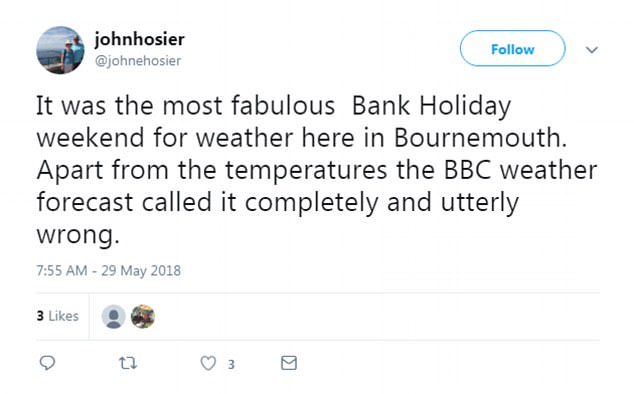 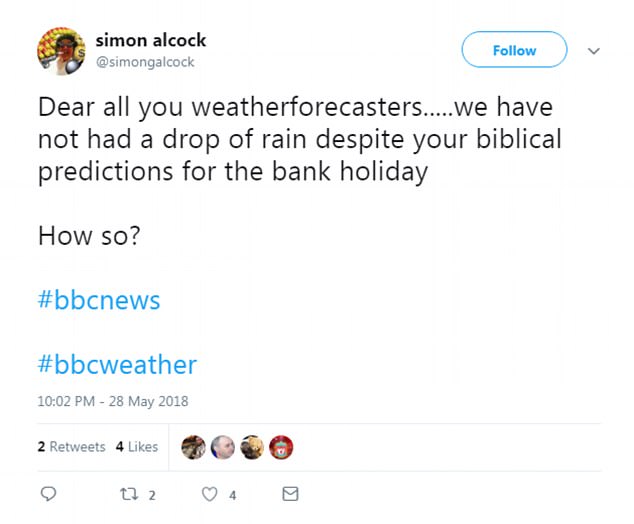 While someone else wrote: ‘It was the most fabulous Bank Holiday weekend for weather here in Bournemouth.

‘Apart from the temperatures the BBC weather forecast called it completely and utterly wrong.’

The Met Office did predict some showers from pressure heading in from Spain and the Bay of Biscay, but predictions were largely dry.

The BBC told The Sun: ‘MeteoGroup uses several weather models. On average, the statistics confirm that our users can rely on very accurate forecasts.’ 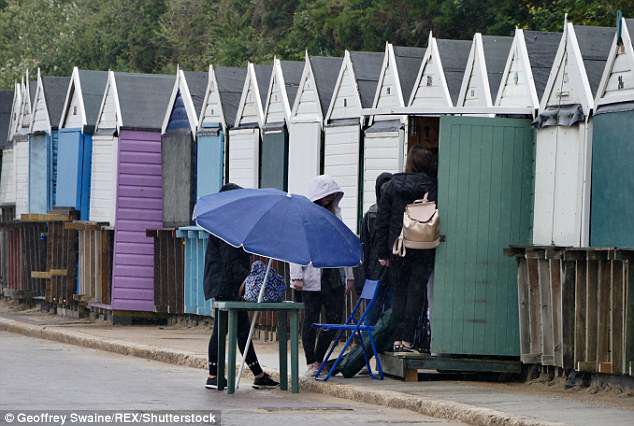