Britain is braced for a chilly start to Bank Holiday Monday, before a weather front “sinks” south and brings outbreaks of rain. Temperatures today will be “below par” for the time of year, but some areas will see sunshine later in the day. Presenting the forecast while holding a lamb, Carol Kirkwood said: “Now it’s a chilly start to the day and it’s sunny here but its a cold wind as well. As we go through the day for many of us temperatures will be below par for this stage in May, but it will be dry for many. However, we have got a weather front sinking south and that is producing some showery outbreaks of rain.

“Currently across parts of southern Scotland and through the course of the day that weather front will sink south into northern England, and also Northern Ireland, bringing some showery rain with it as it does so.

“By the time it gets into the Midlands and East Anglia some of the showers could be heavy. But because they are showers not all of us will see them.

“South of that into southern England and most of Wales, we are looking at a drier and brighter day.”

The BBC weather host added: “So for Scotland it’s windy across Shetland this morning and we’ve also got the showers north of the Great Glen. 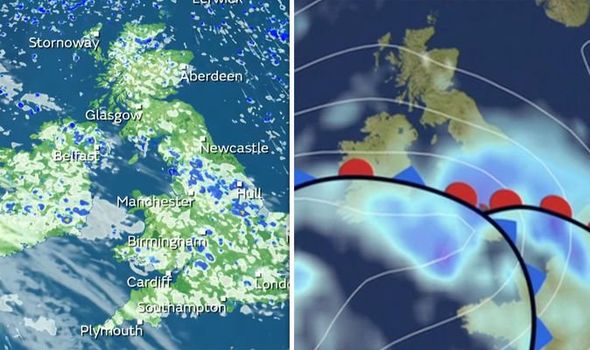 “Down to about 300m or so they will be wintery, but as the rain pushes away from the south of Scotland it will brighten up later on.

“What we also have is that rain getting into northern England and Northern Ireland, eventually into East Anglia and also the Midlands.

“Now for southern areas there will be some brightness, there will also be some sunshine around, but later we will see a bit more cloud coming in turning the sunshine hazy.”

The Met Office forecast showers for the week ahead, as an area of low pressure creeps in from the west.

Meteorologist Mark Wilson said: “A band of cloud and rain spreads in from the west and moves eastwards on Tuesday bringing a change to more unsettled conditions from mid-week.

“There is going to be quite a bit of rain around and it will be quite windy at times, especially in the north.

“There is the potential for some particularly heavy rain on Wednesday and Thursday in the northeast.

“Elsewhere we are looking at heavy thundery showers across much of England and Wales and it will be very windy at times particularly along coastal regions, this will need to be watched in terms of issuing any warnings.

“A complicated area of low pressure comes in from the west around mid-week bringing much of the unsettled weather before another low skirts the UK towards the end of the week.”