Soaring temperatures will bathe Brits in almost 20-degree heat later on Sunday as continental weather sweeps into the UK. It will be balmy across much of the UK throughout Sunday but rain will fall in Northern Ireland and Western Scotland. Showers will arrive for the rest of the UK on Monday morning and continue through next week as temperatures fall but no frosts are expected.

BBC Weather presenter Susan Powell told BBC Breakfast how it was “really mild across eastern England overnight” but is “going to be quite soggy for many of us through the week” but  she added it will be “a lot milder than it has been in recent weeks”.

She said: “Through the week ahead it will be milder but it is also going to be showery some of the showers are going to be quite punchy as well.

“To the east of the UK we’ve pulled in some very warm air from across the continent hence the mild night.

“And it will turn out to be quite warm here through this afternoon.” 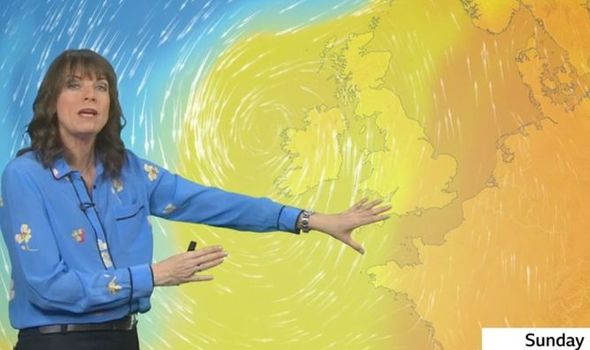 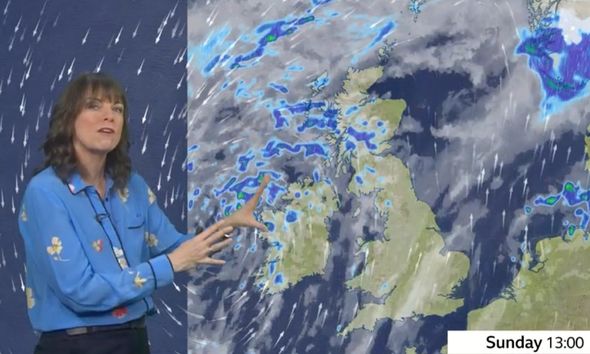 The weather presenter added the whole of UK has “moved into milder air for Sunday.”

She said this morning across eastern areas there have been a “few sharper showers at the moment clipping into southern counties” but stressed “they should clear”.

Powell added: “England and Wales dry for much of the day but we are anticipating perhaps some thundery showers pushing up from the south again through the afternoon.

“Scotland and Northern Ireland closer to the centre the area of low pressure will have gusty winds throughout the day.” 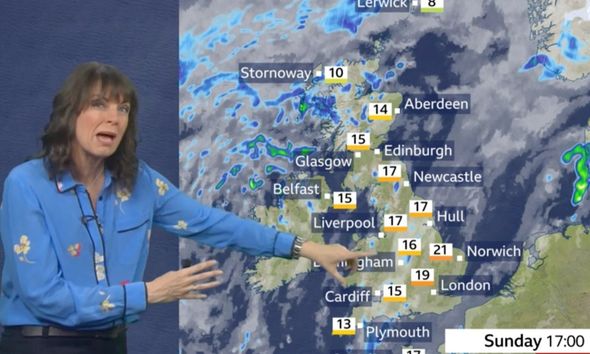 But she warned gusts in Northern Ireland could hit up to 40 miles an hour. 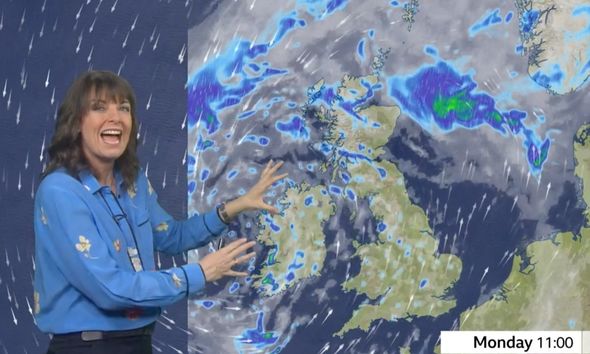 From Sunday evening into Monday morning showers will arrive for Southern and Eastern counties of England and temperatures fall slightly from a balmy Sunday.

Monday will be showery “throughout the course of the day” and we are “anticipating quite heavy downpours across Scotland and Ireland.”

Later on Monday afternoon will see temperatures fall to a mild 18 in Norwich, 17 in Liverpool, 16 in London, 16 in Newcastle and 13 in Plymouth.

She concluded that there will be “more showers to come through the week again.”