The country is expected to wake up to a cloud of freezing fog on Thursday morning, with temperatures set to reach as low as -6C in some parts of the UK. BBC Weather forecaster Carol Kirkwood warned the fog will come ahead of a new weather front that is set to bring more snow. She said: “There is the risk of ice on untreated surfaces. It will be cold and frosty. We will have some freezing fog, particularly around the borders, north-west England down towards the Midlands. Some mist and fog patches forming elsewhere.

“This fog will be slow to clear tomorrow. Some of it could linger for much of the day.

“Tomorrow, still a lot of dry weather around.

“We have got a weather front slipping slowly southwards.

“Still with some snow in it. Behind it, further wintry showers across the far north-west of Scotland.

“These are our temperatures. If you’re are stuck under the fog, you will find it will suppress the temperatures.

“For some, you will hardly break freezing.” 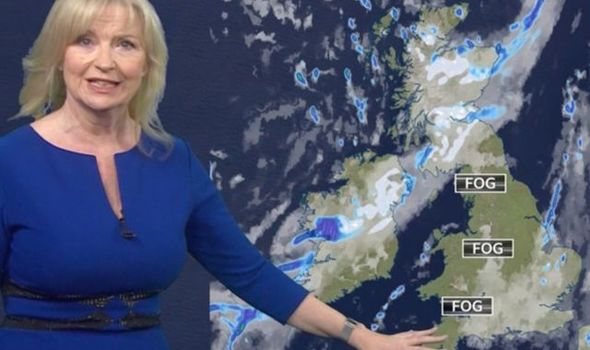 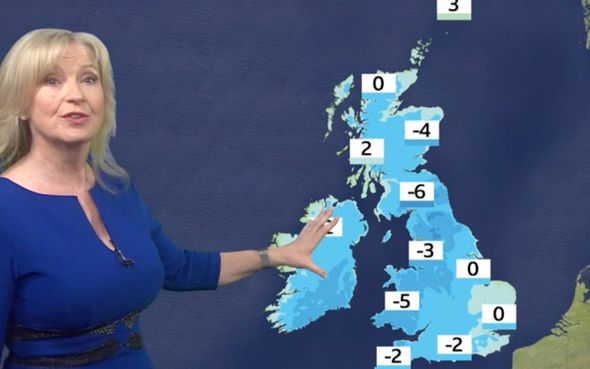 The current cold spell is expected to last into next week, and could be trumped by even worse to come.

A new freezing “Beast from the East” weather front is on its way as temperatures plunged to an icy -8C (18F) on Monday.

The last Siberian weather front to earn that nickname hit in 2018 when snow blanketed large areas and temperatures fell to -14C. Now the Met Office is tracking two weather events “fighting for influence over the UK”, which could see temperatures plunge in coming weeks.

Earlier this week, parts of the country woke to below freezing temperatures with Loch Glascarnoch in the Highlands at -8C.

But more is yet to come, with meteorologists observing Sudden Stratospheric Warming, normally associated with a big freeze.

It is the phenomenon that brought the 2018 Beast from the East. Experts are also tracking La Niña, dragging fiercely wet and stormy weather. Met Office spokeswoman Nicola Maxey said: “You’ve got the two events happening at the same time so they vie against each other in a sense. They’re fighting for influence over the UK.”

In 2018, Public Health England put out a Level 3 cold-weather alert, one step below a national emergency as major services were disrupted.

Last winter was relatively mild but experts warn this year we might not be so lucky.

John Hammond, of the website Weather­trending, said: “There are signs this winter will be quite different. Of course, some places have already had snow, and much of early December stayed quite cold.”

The notorious Beast from the East occurs when rapid warming happens up to 30 miles above the Earth’s surface.

Mr Hammond added: “That caused a Polar Vortex to go into reverse, delivering bitter winds from Siberia, in place of our more usual mild Atlantic winds.”

He added ominously: “There are signs the stratosphere is beginning to ‘misbehave’ again this winter. That may have unpredictable and extreme impacts on our weather later on this winter. With this would come the chance of severe snowfall and extreme cold.”

DON’T MISS:
Britain braced for ‘Beast from the East’ as temperatures set to plunge [FORECAST]
UK snow forecast: Britain braces for 13 inches of snow and -10C chill [MAPS]
Snow radar LIVE: Where is it snowing in the UK right now? [LIVE BLOG] 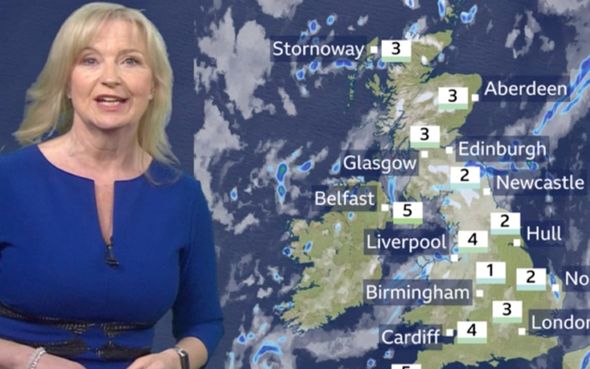 Ms Maxey added that the warming in the stratosphere takes at least 10 days to move down.

The forecaster continued: “The feeling at the moment is that we may see some colder weather towards the end of January into February.”

Meanwhile, temperatures are expected to remain below average with rain, sleet and snow expected in parts.

Ms Maxey said: “This cold spell will last into next week. By the time we get to Friday, we’re starting to see the chance that things might warm up a bit.

“But we’re still looking at 3C or 4C for London, with isolated areas perhaps seeing 6C.”