The unsettling weather will reach Britain’s shores overnight between Sunday and Monday morning battling with the already freezing conditions caused by a Scandinavian front set to leave the country. Cold temperatures will gradually rise towards the end of the week but frost will still be the key weather element for many to wake up to on Monday morning, with temperatures below freezing levels in the early hours of the day. BBC Weather forecaster Darren Bett warned strong gales will sweep in from the south across the country during the day causing potential disruption.

He said: “This evening skies will clear in many areas. We’ll keep cloudy skies for Northern Ireland across parts of Wales and the south-west with perhaps a little bit more rain coming in as well.

“There will be a touch of frost, more likely across northern England and Scotland, not as widespread as recently and that’s because the winds will be strengthening.

“Despite those clearer skies, temperatures shouldn’t get quite as low.

“For all of us, it’s going to be a windier day on Monday.

“Gales possible for Northern Ireland and across the south-west of England together with that risk of rain.

“Temperatures here, on the whole, a little bit higher than we’ve seen today. 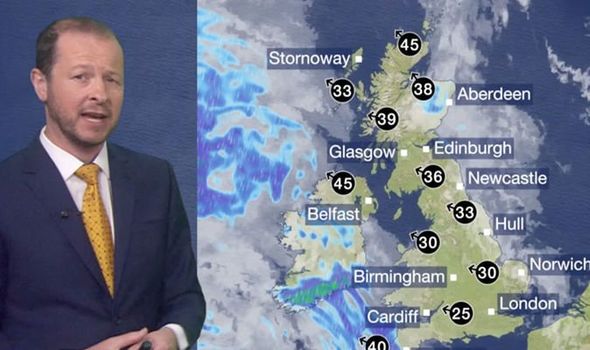 “The windy weather comes with that area of low pressure running close to the UK.

“That moves away and this weather front is bringing the cloud and rain starts to push its way eastwards.”

The weather is, however, set to change for the better towards the end of the week, when temperatures are set to rocket to up to 24C for some.

Warm air will sweep in from the continent next week, seeing temperatures from the mid-teens and up all across the nation.

Some models have even gone so far as to predict the temperatures could climb up to 24C in some parts.

The Met Office forecast says we can expect the dry and sunny weather to begin on Thursday.

It said: “The best of the sunshine will be in the west and northwest and it will most likely be warm for the time of year.”

Met Office meteorologist Luke Miall said a change to warmer and largely more settled weather will set in after the weekend.

He said: “Things will start to feel a lot more spring-like and temperatures will rise into the mid-teens.

“Southwestern areas will turn a bit more unsettled and southern areas could see more in the way of wet weather with some heavy rain likely to come into the southwest.

“Warmer air next week will come in from the Continent.

“At the moment we are in a Polar Maritime air mass and this is bringing the colder conditions, next week there will be more of a mix with air from the south.”