Britain enjoyed soaring temperatures this week – but an approaching Arctic weather blast will spark a dramatic plunge in temperatures across the country. BBC weather and the Met Office have revealed that two freezing weather fronts from the Arctic will cover Britain in widespread frost, snow and rain over the next week. The subzero blast will sweep northern regions of the country this weekend, before a second even colder weather front risks an unusual deep freeze.

BBC meteorologist Matt Taylor told viewers this morning: ““We have a cold front on the move today and across the weekend, working its way southwards introducing chillier air to us which will last into next week.

“We will get another shot of even colder air as we go into the middle of next week.

“We have fog across western parts of England and Wales which will be sluggish to remove and could cause travel disruptions.

“Temperatures will only be in single figures in the north, while the south could see temperatures rise up to 18C. 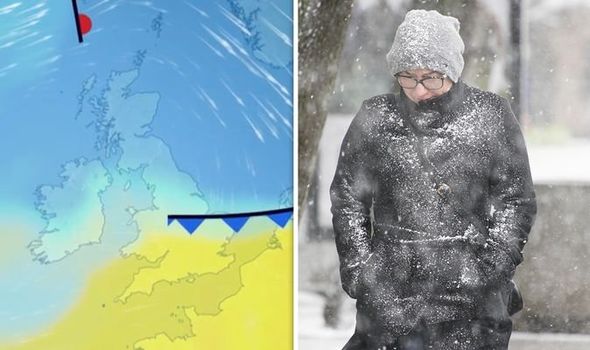 This will see rain, hail, sleet, snowand even some thunder thrown in

“Winders across the north could even reach gale-force strength. Into Sunday night, widespread frost will develop to take us into Monday, with temperatures colder than average for this time of year.

“There is a real frost risk and temperatures could see -1C in Scotland, Northern Ireland and northern England.

“Next week will be a cold week overall with many areas struggling to reach double-figures.

“This will see rain, hail, sleet, snow and even some thunder thrown in.”

The Met Office earlier issued a yellow travel warning to drivers across western England and Wales due to the dense fog.

They added that there could be widespread frost and even lows of -4C in England.

Northern Ireland and southern Scotland will endure the worst of the showers, which the Met Office described as being “wintery at times” with hail.

A spokesman said: “The unsettled weather is likely to continue into mid-April.”