‘It’s a kick in the teeth’: Beef farmer fears a US trade deal would result in having to sell her cow herd

With its herd of contented beef cattle, Gotherington Hill Farm supplies some of the UK’s best meat, a prime example of the work done by traditional British farms.

Its upland fields in the Cotswolds are also a haven for wildlife such as hares, butterflies, skylarks and dung beetles.

But it could disappear if low-quality, low-welfare imports are allowed to undercut the work of James and Charlotte Abbatt, who rescued the derelict farm via six years of back-breaking work. 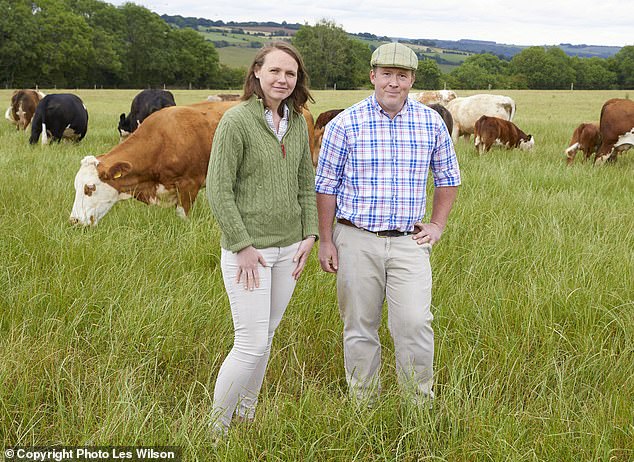 ‘Our business and all British farming must compete on a level playing field to survive,’ says Charlotte, 32. ‘It’s not fair to be up against imports that don’t have to meet the same standards.

‘US farming practices prop up poor welfare – intensifying beyond the point at which animals’ bodies can cope.

‘There’s clearly a problem if they are regularly treating animals with antibiotics to fight infections rather than giving them the space and cleanliness they need.’

While the couple’s herds feed off grass on their 180-acre farm, most American cows are sent to ‘feedlots’ to be fattened on maize – an unnatural diet.

Ninety per cent of feedlot cattle are injected with growth hormones to increase their bulk, while antibiotics are used in large quantities.

Like all farmers, James, 35, works long days – as late as 10.30pm in the summer. Charlotte says: ‘We call it our lifelong project. But we love it and I can’t bear the thought of the work we’ve put in being undermined.’

As well as selling meat to market, the couple also sell ‘beef boxes’ direct to customers.

Charlotte says their first customer described it as ‘the best beef she’d ever tasted’. 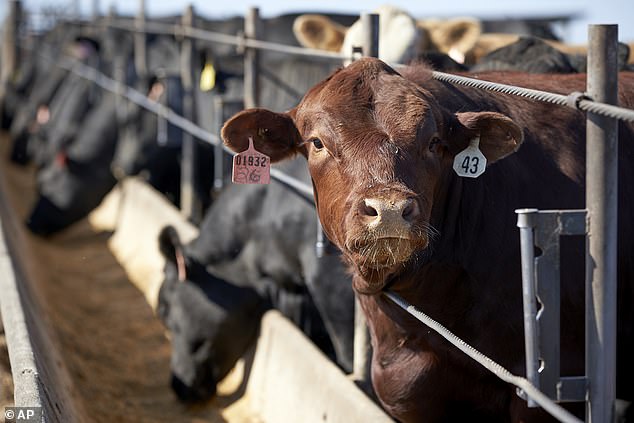 Most American cows are sent to ‘feedlots’ to be fattened on maize – an unnatural diet. Pictured: cattle occupy a feedlot in Columbus, Nebraska

She adds: ‘That felt like a full circle for me. I knew which cow it had come from. I’d seen her being born. I’d looked after her, been there throughout her life. It made me really proud.’

But if low-quality imports are allowed by the Government, the Abbatts fear they would have to abandon the livestock and use the land for something else like ‘glamping’.

‘I’m worried,’ admits Charlotte, who shares other British farmers’ fears of a sell-out trade deal. ‘It’s a kick in the teeth. We feel betrayed,’ she adds, reflecting the fact that most farmers traditionally vote Conservative.

‘Britain is one of the world’s best meat producers because we have one of the best climates for grass.

‘We get a lot of rain and we’ve got a lot of uplands where the best thing you can do is grow grass.

‘And you can’t turn grass into food in any better way than grazing it. I want to keep on producing top quality, high welfare, environmentally beneficial beef.

‘I want to expand and for there to be a viable British farming industry for our children.

‘I think consumers want it, too – we just need our Government to let us.’