Families are being asked to make hundreds of dollars in voluntary payments to public schools, with principals warning that without the contributions they can deliver only a basic education.

In a series of letters to parents before the return to school, principals have said voluntary contributions enable them to offer smaller class sizes, extra support staff, literacy and numeracy programs, musical instruments, science equipment and even ovens for cooking classes. 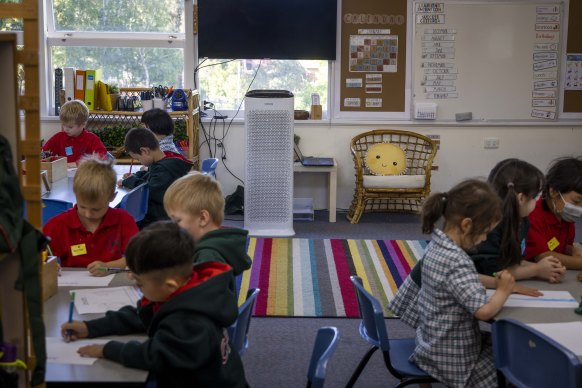 State schools are seeking contributions from parents to pay for anything from smaller class sizes to 3D laser printers. Credit:Wayne Taylor

But schools are bracing for a dip in payments as more families struggle with the rising cost of living.

In 2021, the Education Department banned schools from pressuring parents to make payments, but public school advocates said some voluntary contribution notices were still misleading, implying it was compulsory.

At least one Victorian state school in a disadvantaged area resorted to including a Centrelink auto-payment form in its welcome pack for parents.

Each school decides its voluntary financial contributions based on subject needs and extracurricular activities, which means different schools ask for different contributions and offer payment plans. The funds can cover everything from photocopying costs to stationery, first aid supplies, student ID passes and school nurses.

The contributions are not supposed to cover essential items, but Glen Eira City councillor and associate professor in education at Southern Cross University David Zyngier said schools were under financial pressure.

Zyngier said if state schools were properly funded, voluntary contributions would not be so important.

“Unfortunately, public schools still have to beg, borrow and hopefully not steal from parents and the community to supply the essentials for their kids,” he said. “The reason they have to do that is … in Victoria and almost every public school in the rest of Australia, except for ACT, are underfunded.”

Zyngier said some schools were underfunded by up to $2 million.

“So it doesn’t matter how much the parents do contribute, it will never make up for that shortfall.”

At Melbourne High School, voluntary contributions added up to $3600 for one year 9 student, on top of the cost of a school-approved computer, uniforms and books. Principal Tony Mordini wrote to parents saying the select-entry school’s programs “cannot be delivered without your financial contributions”.

“The challenge for schools is, how do we pay for it when we find we may not have enough money in our budgets to do that?” he said.

Dalgleish expects schools will receive lower contributions this year due to cost of living pressures.

“There will be some parents 12 months ago who would have been fine, but if their mortgage rates rise, they are going to struggle to make a contribution towards their child’s education. I think we are in for a pretty rocky six months. We still have plenty of federal funding going in to our high-fee independent and Catholic schools, and yet we are still in [the] government system … requesting voluntary contributions from people who might not be able to pay.”

He said families could go on payment plans and that most principals would understand if parents spoke with them about not being able to afford the fees.

It was subsequently told by the Education Department to modify the form, to make it clearer to parents that all contributions are voluntary.

Principal Nick Adamou said that while schools provide free instruction and all payments are voluntary, they ensure the school can offer the best education and support for students.

Parent payments and fundraising efforts have enabled the college to limit class sizes, he said. They have also gone towards sports, literacy and numeracy programs, instrumental music and even faster Wi-Fi.

Save Our Schools national convener Trevor Cobbold said some voluntary payment notices were still “misleading”, as some were sent in the form of an invoice, even if they clearly stated they were voluntary.

“That gives the impression that they’re not voluntary,” he said.

He added there needed to be more outreach to struggling families.

“How many migrant families are going to walk up to the principal and say, ‘We are poor, we aren’t going to pay,’ ” he said.

“Victoria is the equal-second-worst-funded system in the country. So of course schools are under pressure and putting pressure on parents.”

Australian Principals Federation president Tina King said schools will source some classroom materials through voluntary contributions and teachers will even buy materials themselves.

“They often dip into their own pockets, it’s not what we endorse or advocate.”

King said the revisions to the parent payment policy and the refinement of allowable wording to families has had an impact on contributions.

“While a small percentage of schools’ payments have gone up, we know across the board schools have taken a hit as well,” she said.

“That compromises the rich opportunities the schools offer.”

But she said schools would do everything they could to ensure students were not disadvantaged if they could not contribute to voluntary payments.

Social campaigner Les Twentyman said the reality for families is that schooling is not free.

“For families unable to meet the cost of ‘voluntary’ school fees, they often can face public shaming or the exclusion of their child from various school activities, which can have a negative impact on a child as no child at school wants to feel different,” he said. “So, if you are carrying around second-hand books, wearing an old uniform or banned from certain activities, this can lead to a child withdrawing from their education or refusing to attend school.”

Viewbank College, in Melbourne’s north-east, told parents that schools provide free instruction to fulfil the standard curriculum, but that other programs the college offers add to the cost of education.

“Our college is proud of the quality of our facilities and resources available for our students to enjoy, and few schools match the numerous programs we offer to cater for students’ needs and interests. However, these do not come without extra cost,” principal Sharon Grimes wrote.

Those extras included additional support staff in science, technology and performing arts, and resources such as 3D laser printers.

Australian Education Union Victoria branch president Meredith Peace said if Victoria’s public schools were fully funded by the federal and state governments, they would not have to depend on teacher and parent contributions to provide the resources students need for high-quality education.

“The need for parents to contribute to the cost of educational resources creates greater inequity in the system, where families who have a greater capacity to pay benefit more than those families who can’t,” she said.

“These contributions also place a significant burden on teachers who don’t want to see students missing out, and want nothing more than to deliver the education their students need and deserve, even if it comes at a significant and unreasonable personal expense.”

No child can be disadvantaged or refused instruction in the standard Victorian curriculum if voluntary financial contributions are not made. Families can apply for support through schools and the State School Relief fund.

If you are struggling with back-to-school costs, you can contact organisations such as the Les Twentyman Foundation and other support services here.