Singapore: China will implement a three-child policy as it moves to reverse an ageing population.

The decision was announced by the Politburo on Monday but details remain limited. 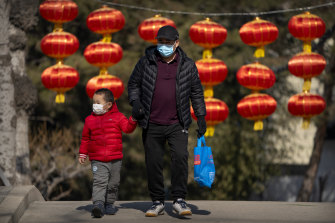 A man and child walk past lanterns at a public park in Beijing. While Beijing ended its controversial one-child policy in 2017, it had not yet published new family size limits.Credit:AP

Earlier this month, the National Bureau of Statistics said China’s overall population had risen to 1.412 billion in 2020, from 1.4 billion a year earlier. That was the lowest rate of growth since 1961, when the nation was in the grips of famine.

The once-in-a-decade census revealed that annual population growth rate dropped to 0.53 per cent from 0.57 per cent in the last national survey after the nation gained another 72 million people over 10 years.