Ben Roberts-Smith was in the midst of describing a battle in Tizak, an Afghan village north of Kandahar, when suddenly he stopped talking. His face went white. He swivelled in his chair and turned his back to the courtroom.

The former SAS soldier had been giving evidence for more than five hours in his defamation suit against The Age, The Sydney Morning Herald, The Canberra Times and three journalists. 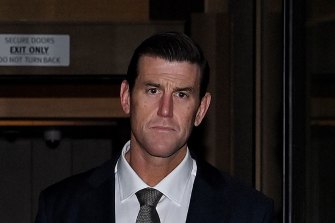 It was his own barrister, Bruce McClintock, SC, conducting the examination, and the ambience was more war stories than war crimes – just two old veterans trading tales beside the fire of a Federal Court trial.

Mr Roberts-Smith had swept into court in the morning with his solicitors moments before Justice Anthony Besanko took the bench, arriving after everybody else had taken their seats as a bride arrives at her wedding.

A day earlier a judge had raised concerns in separate proceedings about reports of an improper relationship between Mr Roberts-Smith and one of his solicitors — which was later denied — but if there was any residual embarrassment it was well concealed. The solicitor in question smiled as she sat down.

Mr Roberts-Smith is a tall man, as his barrister often remarks, and his hands are in proportion with the rest of his body. He uses them for emphasis – pressing his palms together to indicate sincerity, lifting his thumbs away from his clasped hands to express surprise or drawing shapes with his fingers to illustrate particular words. He made a twirl when he was talking about spirals.

As Mr Roberts-Smith spoke, his arms and hands became the machinery of his expression.

During Mr McClintock’s dissection of his curriculum vitae the movements were small, but as the pair traversed further into Mr Roberts-Smith’s military career they became more expansive. He raised his whole arm to show where the enemy had outflanked his patrol. He pulled an imaginary pin from a grenade to demonstrate how an American grenade operated.

By 4.15pm on Thursday afternoon, Mr Roberts-Smith was talking animatedly about a battle in 2010 for which he was later awarded the Victoria Cross. The court heard about how eerie it was to walk through a fig orchard with shadows falling across the ground and not knowing where the enemy was hiding. It heard how he hid behind a mound of rubble while his comrade buried his face in the dirt and bullets pounded into the mud around him.

As Mr Roberts-Smith spoke, his arms and hands became the machinery of his expression.

“And when you see that, the reality is you have to make a decision … ” he said.

Then nothing further came out.

The room fell silent. Heads rose from their notes. It was almost shocking for a man so brimming with chutzpah to suddenly seem to vulnerable.

Justice Besanko cleared his throat. “Perhaps that would be a good time to adjourn?” The lawyers rose and shuffled their papers. Mr Roberts-Smith’s parents put their arms around one another. The man in the witness box hunched briefly on his chair. And then he rose.

His evidence will continue tomorrow.