Clothing giant Benetton has come under fire for using photographs of migrants being rescued in the Mediterranean in an advertising campaign.

French charity SOS Mediterranee, who carried out the rescue of the migrants off the coast of Libya last week, expressed their shock at discovering that Benetton had been using their images.

One of the images show SOS Mediterranee staff handing out life-vests to migrants in a dinghy, with the ‘United Colors of Benetton’-logo added at the bottom. 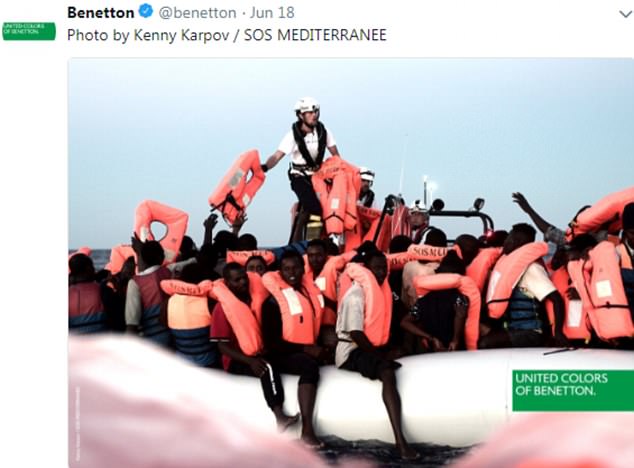 Shocking: This image depicts SOS Mediterranee’s rescue mission in the Mediterranean Sea last week, and has been used by Benetton as an advert, with their logo added at the bottom

‘SOS Mediterranee fully dissociates itself from this campaign which displays a picture taken while our teams were rescuing people in distress at sea on June 9,’ it said on Twitter Tuesday.

The ‘dignity of survivors must be respected at all times,’ said SOS Mediterannee.

Benetton published two publicity photographs on its Twitter account featuring migrants, one credited to SOS Mediterannee and another to the Italian news agency ANSA.

A Benetton spokesperson declined to discuss the brand’s reason for using the photos, and told MailOnline that they had bought the image from Kenny Karpov, the photographer of SOS Méditerranée. 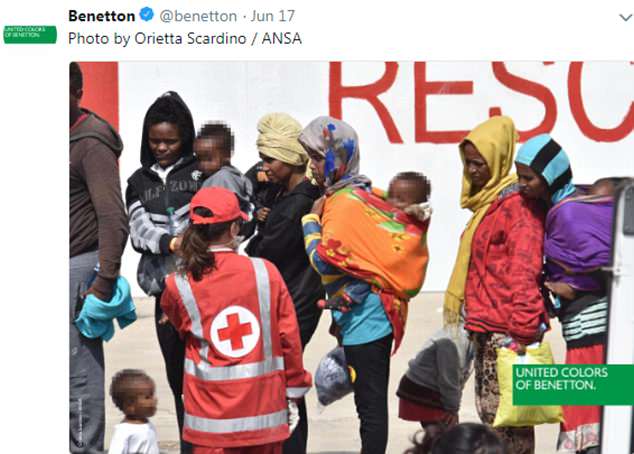 Critical: SOS Mediterranee expressed their shock at discovering that Benetton had been using the photos of the rescue mission, which saw some 630 people saved from the sea last week

A ship operated by SOS Mediterannee, the Aquarius, rescued 630 migrants in the Mediterranean last week.

The vessel was left stranded at sea for a week after Italy’s populist government refused to allow the migrants to disembark.

The migrants, among them scores of children, were eventually taken to Spain.

Benetton – and Italian fashion brand – has been criticised in the past for its shock publicity campaigns.

Campaigns showing an AIDS patient, a black woman breastfeeding a white child and even former pope Benedict kissing a senior Egyptian imam have all sparked controversy.