Betty White, who held the Guinness World record as the female entertainer with the longest television career, has died at age 99.

"Even though Betty was about to be 100, I thought she would live forever," her agent and close friend Jeff Witjas told People in a statement after TMZ first reported White's death on Friday. "I will miss her terribly and so will the animal world that she loved so much. I don't think Betty ever feared passing because she always wanted to be with her most beloved husband Allen Ludden. She believed she would be with him again."

The popular actress made audiences laugh for over 60 years on television and film. She was best known for roles on The Mary Tyler Moore Show and Golden Girls. She was the last surviving cast member of the latter sitcom.

White wasn’t just a pretty face who could crack jokes, though. She was the first woman to produce a sitcom (Life With Elizabeth) and she was given lifetime achievement awards by the Screen Actors Guild, the Television Critics Association and the British Academy of Film and Television Arts. She was nominated 23 times for an Emmy, winning six trophies. 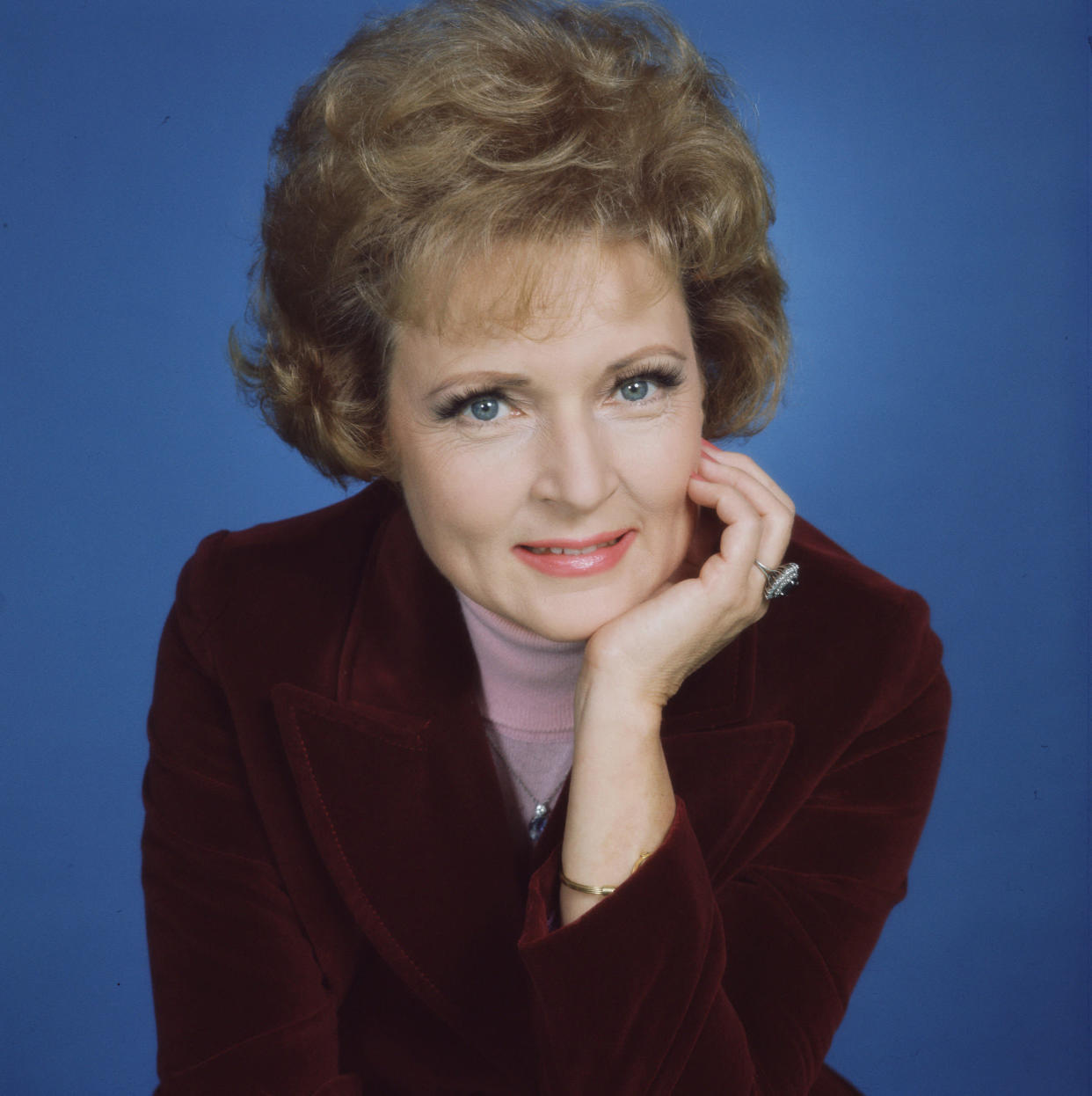 And though many actresses find work harder to come by as they age, White’s career never flagged. In the past five years, she became the oldest person ever to host Saturday Night Live; she starred in TV Land’s Hot in Cleveland; hosted and produced Betty White’s Off Their Rockers; and won a Grammy award for a spoken word recording of her book, If You Ask Me.

White was born January 17, 1922 in Oak Park, Illinois, as an only child of English, Welsh, Danish, and Greek ancestry. During the Great Depression, her family moved to Los Angeles, where she attended the Horace Mann School in Beverly Hills. There, she discovered her love of performing.

After graduating from high school, White embarked on an acting career, though it was interrupted by World War II. After the war, White (who’d been considered “unphotogenic”) worked in radio until 1949, when she began appearing on Hollywood on Television with Al Jarvis. From there, she founded a production company, and created and starred in the nationally-syndicated sitcom Life With Elizabeth. 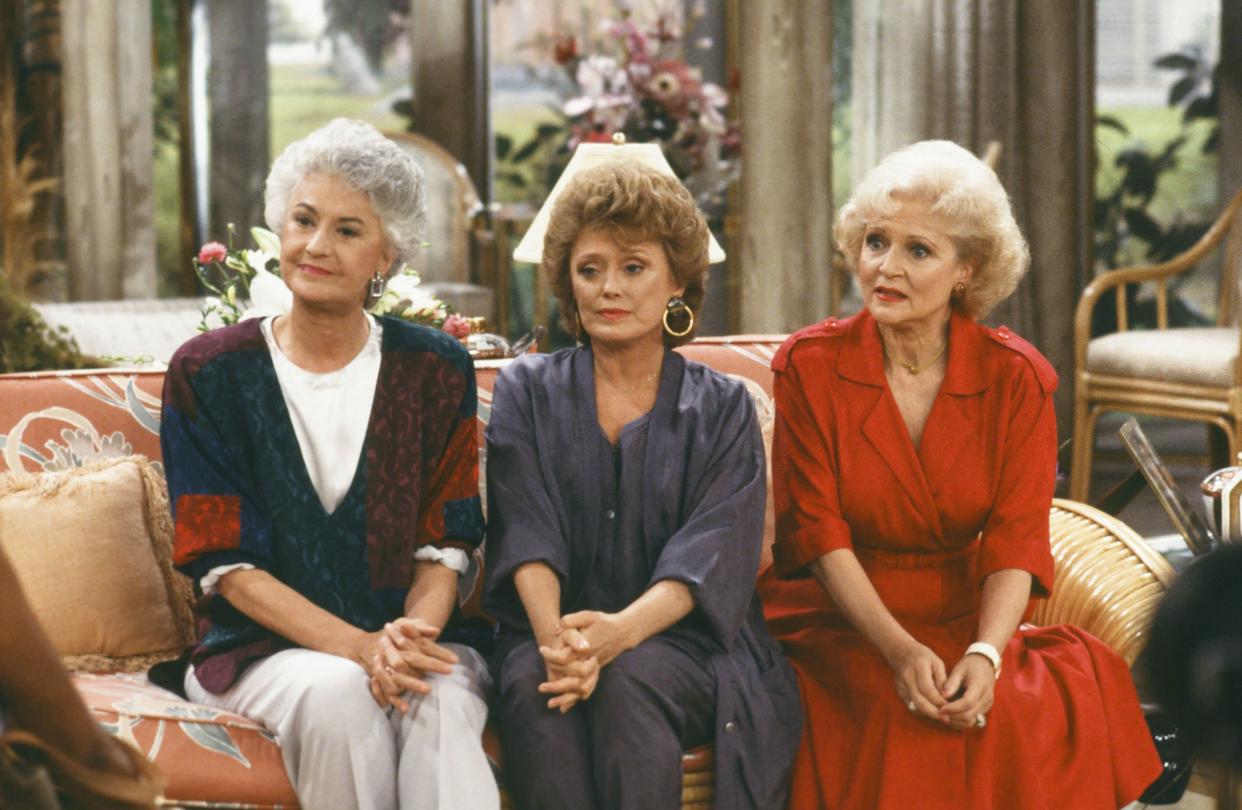 For nearly two decades, in the ‘60s and ‘70s, she hosted the Tournament of Roses parade broadcast on NBC. White also appeared in numerous game shows, notably Password. She ended up marrying Password’s host, Allen Ludden, in 1963.

But White’s career really took off when she began playing man-hungry Sue Ann Nivens on The Mary Tyler Moore Show. She won back-to-back Emmys for the role, and when Mary Tyler Moore ended, got her own sitcom, The Betty White Show. It only lasted one season, however, and White made do with appearances in TV movies and miniseries

Then, in 1985, White struck gold again, with Golden Girls. The comedy about four senior citizens living together in Florida was a huge hit. White initially was offered the role of Blanche (played by Rue McClanahan), but director Jay Sandrich suggested that the actresses switch, as White had already played one lusty character in Sue Ann. Because of that genius idea, White earned a place in America’s heart as the sweet, naive, slightly dim Rose.

After Golden Girls, White worked steadily in guest gigs on shows including Ally McBeal, Malcolm in the Middle, and The Practice. But her career experienced a major resurgence in 2009, after White starred alongside Sandra Bullock and Ryan Reynolds in The Proposal.

The next year, a campaign for White to host Saturday Night Live was successful, and she became the oldest person ever to headline the show. A few months later, White booked another sitcom, Hot in Cleveland, on TV Land.

In 2011, White published the book If You Ask Me (And of Course You Won't), and she received a Grammy for the audio recording. That same year, NBC created Betty White’s Off Their Rockers, in which seniors play pranks on young people. The network also televised two star-studded birthday extravaganzas for White.

Reynolds, who maintained a close friendship with White after The Proposal, was among many celebrities and public figures (including President Joe Biden) to pay tribute to White Friday on social media:

The world looks different now. She was great at defying expectation. She managed to grow very old and somehow, not old enough. We’ll miss you, Betty. Now you know the secret. pic.twitter.com/uevwerjobS

Betty White brought a smile to the lips of generations of Americans. She’s a cultural icon who will be sorely missed. Jill and I are thinking of her family and all those who loved her this New Year’s Eve.

RIP Betty White, the only SNL host I ever saw get a standing ovation at the after party. A party at which she ordered a vodka and a hotdog and stayed til the bitter end.

Our national treasure, Betty White, has passed just before her 100th birthday. Our Sue Ann Nivens, our beloved Rose Nylund, has joined the heavens to delight the stars with her inimitable style, humor, and charm. A great loss to us all. We shall miss her dearly.

A spirit of goodness and hope. Betty White was much beloved because of who she was, and how she embraced a life well lived. Her smile. Her sense of humor. Her basic decency. Our world would be better if more followed her example. It is diminished with her passing.

Betty White : I is very hard to absorb you are not here anymore.. But the memories of your deLIGHT
are ..Thank you for yur humor , your warmth and your activism ..
Rest now and say Hi to Bill

Y’all, with the passing of #BettyWhite we have lost one of the best humans ever!

So sad to hear about Betty White passing. I loved watching her characters that brought so much joy. Thank you, Betty, for making us all laugh! https://t.co/iOkmHLrW21

I Watched Her on her first TV Show “Life With Elizabeth”When I Was 7 Yrs Old.When She Did S&C I Got a Chance To Tell Her. I Was Embarrassed cause tears came to my eyes.She put her arms around me, & I Felt 7 again.
Some Ppl Are Called ICONS🙄,
BETTY IS A TRUE ICON.

God bless Betty White. As my mom would say, “we were so lucky to have her.”https://t.co/pXzu6JezOg

Oh Dear Lord. Heaven just got a new superstar to celebrate with tonight! An icon, a legend, a trailblazer, a badass, and a ray of sunshine who gifted us creative genius, joy and laughter for 99 years. Thank you for your bold and generous spirit. Rest In Peace #BettyWhite ❤️❤️❤️ pic.twitter.com/ng2gHB8K5K

White passed away as the last remaining Golden Girl and working until the very end. She leaves behind three stepchildren with Allen Ludden, who passed away from stomach cancer in 1981.