WASHINGTON — The federal government said on Wednesday said it has cleared a key hurdle to open up the central California coast to offshore wind farms, part of President Biden’s aggressive plan to expand renewable energy and shift the nation away from fossil fuels.

The idea of building wind farms along the Pacific coast has long been discussed but often dismissed as logistically too complicated. The particularly deep ocean bed makes it challenging to build the platforms needed to house the turbines, and the Navy has repeatedly objected to anything that could interfere with its training and operations along the coast.

But the Department of Defense joined with the Interior Department on Wednesday to lend its backing to a plan to allow commercial offshore wind farms in a 399-square-mile area in Morro Bay along central California, and another area off the coast of Humboldt in northern California.

“This is a breakthrough that will allow the siting of offshore wind in the Pacific Ocean,” said Gina McCarthy, the White House climate adviser.

It marks a milestone for California, which has committed to renewable energy and has been experiencing the effects of climate change like few other states. Last summer, wildfires raged and the highest temperature ever recorded was logged at 130 degrees Fahrenheit in Death Valley. Sea levels are rising, coasts are eroding, and drought is intensifying.

Gavin Newsom, the Democratic governor of California, called the move as “historic.”

“Developing offshore wind to produce clean, renewable energy could be a game changer to achieving California’s clean energy goals and addressing climate change — all while bolstering the economy and creating new jobs,” said Mr. Newsom, who tussled regularly with the Trump administration over California’s attempts to cut fossil fuel pollution but found an ally in President Biden.

The announcement came weeks after the Biden administration approved the nation’s first ever commercial-scale offshore wind farm, to be constructed off the coast of Massachusetts. About a dozen other offshore wind projects along the East Coast are now under federal review. 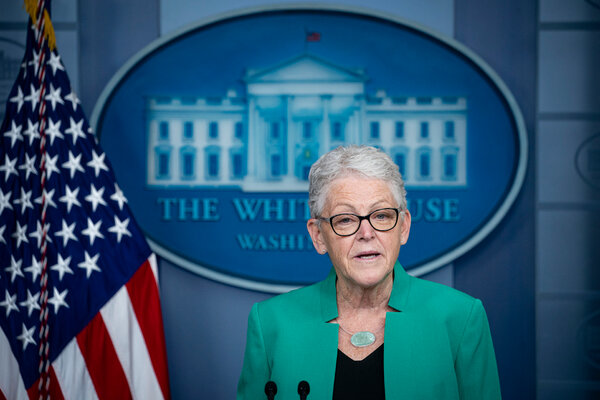 The administration estimates that wind turbines in Morro Bay and near Humboldt could together eventually generate enough electricity to power 1.6 million homes.

If those claims are realized, it could make the California coast one of the largest generators of wind power in the world. The new coastal Massachusetts wind farm is expected to have up to 84 giant wind turbines. By comparison, Mr. Newsom estimated that the California sites could hold more than 300 turbines.

Administration officials declined to say when those areas might be leased to companies. Asked to offer a timeline for California’s offshore wind development, Interior Secretary Deb Haaland said, “This is a priority for us and we’re excited about it.”

Mr. Newsom said that he has already heard from potential developers. “We’ve had not just international companies but governments reach out to us,” he said. “We expect an enormous amount of interest.”

The moves come as Mr. Biden has pledged to cut the nation’s fossil fuel emissions 50 percent from 2005 levels by 2030 by pushing policies designed to promote the use of electric vehicles and clean energy such as wind and solar power. In particular, the administration has pledged to build 30,000 megawatts of offshore wind in the United States by 2030.

While the Obama administration hoped to bring offshore wind farms to California, it was never able to sell leases to commercial companies to build turbines there.

In 2018, the Trump administration took the first steps to enable companies to lease waters in Central and Northern California for wind projects, when the Interior Department identified three areas for leases, including the Morro Bay and Humboldt county waters. But after Pentagon officials objected, the plan was adrift.

Mr. Biden has sought to unite his Cabinet in finding ways to promote renewable energy and cut carbon dioxide pollution, under what he has called an “all-of-government” approach to tackling climate.

Speaking on a White House call with reporters, Colin Kahl, the Pentagon’s under secretary of policy, said, “Tackling the climate crisis is a national security imperative and the Defense Department is proud to have played a role in this important effort. The Defense Department is committed to working across the U.S. government to find solutions that support renewable energy in a manner compatible with essential military operations.”

Offshore wind development will almost certainly not come without conflict. Development along California’s coast has long been a sensitive and highly regulated issue. The fishing industry is concerned the turbines will harm its livelihood, and the potential effect on birds, fisheries and marine mammals will be closely scrutinized.