Biden retreats on veto threat after intense pushback from Republicans

Washington: President Joe Biden has walked back a threat to veto his bipartisan infrastructure deal amid intense pushback from Republicans that jeopardised the fragile agreement just one day after it was reached.

In a prepared statement, Biden said on Saturday (US time) he “understandably upset some Republicans” when he said two days earlier that he would only sign the $US1.2 trillion infrastructure deal into law if Congress also passes a multitrillion-dollar package focused on “human infrastructure” outlined in his American Families Plan and supported by only Democrats. 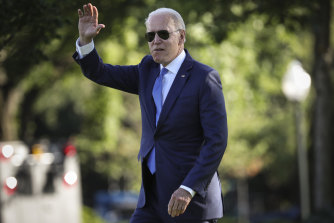 US President Joe Biden has been forced to walk back threats he made to Republicans following a backlash.Credit:Bloomberg

“My comments also created the impression that I was issuing a veto threat on the very plan I had just agreed to, which was certainly not my intent,” Biden said.

Republicans — including some of the 11 GOP senators who agreed to the bipartisan deal — fumed over the condition, arguing they never heard the President raise it during negotiations. Some threatened to pull their support. Republican senator Lindsey Graham tweeted, “No deal by extortion!” And senator Jerry Moran reportedly had second thoughts.

“To be clear,” Biden said on Saturday, “our bipartisan agreement does not preclude Republicans from attempting to defeat my Families Plan; likewise, they should have no objections to my devoted efforts to pass that Families Plan and other proposals in tandem. We will let the American people — and the Congress — decide.

“The bottom line is this: I gave my word to support the infrastructure plan, and that’s what I intend to do.”

Biden has made clear he’s pursuing a “dual track strategy” that involves seeking congressional approval of the infrastructure bill with Republicans and the “human infrastructure” with only Democrats.

To pass the latter, he’s relying on a legislative manoeuvre called reconciliation, which would allow Democrats to approve it with a simple majority in the 50-50 Senate, with Vice-President Kamala Harris breaking a potential tie.

Biden has been open about this strategy for weeks. But until Thursday — immediately after he announced the deal — the President hadn’t made the passage of the reconciliation package a stipulation for him signing the infrastructure bill.

“If they don’t [both] come, I’m not signing it. Real simple,” Biden said on Thursday.

His retreat comes one day after the White House was defiant the president’s stance had stayed the same all along. “That hasn’t been a secret,” press secretary Jen Psaki said at Friday’s White House briefing. “He hasn’t said it quietly. He hasn’t even whispered it. He’s said it very much out loud.”

To pass the infrastructure bill, Biden faces a dual challenge of keeping both Democrats and Republicans on board. With 11 Republicans and 10 Democrats backing the bipartisan agreement, the deal initially seemed to have strong odds to pass the 60 vote-threshold to defeat a filibuster. But then came criticism from Republicans that Biden blindsided them with his condition.

“I intend to work hard to get both of them passed, because our country needs both. … Ultimately, I am confident that Congress will get both to my desk, so I can sign each bill promptly.”