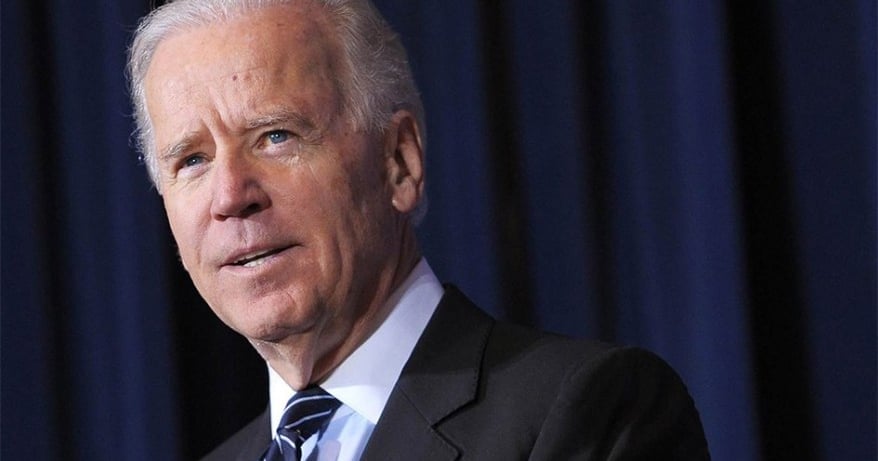 Former Vice President Joe Biden gave his first public speech since two women came forward to claim he touched them inappropriately on April 5. Contrary to his video statement responding to — but not quite apologizing for — the allegations earlier this week, Biden’s speech seemed to demonstrate how little he’d learned, and how lightly he was taking criticisms of his behavior.

As Biden got on stage to speak at the International Brotherhood of Electrical Workers Construction Conference in Washington, D.C., he embraced IBEW President Lonnie Stephenson, and immediately after, told the audience: “I just want you to know, I had permission to hug Lonnie.” About midway through his remarks, he made another similar joke, when he put his arm around a child on stage, and quipped: “By the way, he gave me permission to touch him.” The audience, which Buzzfeed News reporter Nidhi Prakash observed was “mostly male”, responded to both jokes with enthusiastic laughter and applause.

Biden’s choice to make light of testimonies from several women he made to feel uncomfortable through the years demonstrates why so many women never speak up about similar experiences. Fear of being told we’re overreacting, as well as fear of being mocked if we speak out about the everyday gendered mistreatment we face, prevent countless women from coming forward and demanding better treatment. In making these jokes rather than taking criticisms of him seriously, as he had quite literally promised he would in his video statement earlier this week, Biden sent a message to women: that we’re absolutely right to fear being laughed at if we speak up.

None of the women accusing Biden of inappropriate physical touching has accused him of sexual violence or assault. But ultimately, their hesitation to speak out seems to emerge from the same root that causes the vast majority of sexual assaults to go unreported: fear of disbelief; fear of public harassment about whether our experience — and recollection of our experience — is valid; fear of being the punchline of jokes.

As countless activists and writers have already pointed out, the allegations against Biden comprise stories of everyday indignities familiar to far too many women and girls, rather than rape and explicit physical violence. Women have recalled Biden invading their personal spaces to bump noses, or coming up from behind to rub their shoulders or smell their hair. The suggestion that these experiences fail to meet some arbitrary threshold of severity for the women to be “allowed” to come forward offers a master class in male privilege and misogyny. Women’s feelings of safety and comfort matter — not just in life-or-death situations of physical violence, and not just when it’s convenient or comfortable for powerful men to listen.

It seems the very cultural critics who have railed against #MeToo for “lacking nuance” seem just as poised to discredit stories like these — stories that are full of nuance and detail from women who are using clear language to describe their experiences and Biden’s actions. Reductive, bad-faith interpretations of these stories as allegations of sexual violence are meant to dismiss them altogether, frame women who come forward as liars merely trying to destroy a famous man’s career, and further demonize and stoke fearmongering around #MeToo. As a result, we’re ultimately steered away from important conversations about the tremendous nuance in sexual harassment culture.

On Friday, Biden told reporters outright that he refused to apologize for “anything [he’d] ever done,” because he had “never been disrespectful, intentionally, to a man or a woman.” But his words ignore the reality that no one gets to choose the impact of their actions and words; that you didn’t mean to offend or cause discomfort does not negate the harm produced by your actions. And despite Biden’s insistence that his behaviors were innocent and void of gendered, sexual connotations, his noted lack of nose-bumping, shoulder-rubbing and hair-smelling of grown men seems to contradict this.

At any rate, long before women’s stories about their experiences with Biden started making headlines, Biden had already faced serious and concerning criticisms for his treatment of Anita Hill in the early 1990s. Biden, then a Delaware Senator and Senate Judiciary Chairman, had exposed Hill to alarmingly sexist questioning when she testified before the Senate that then-Supreme Court nominee Clarence Thomas had sexually harassed her.

It’s critical that we allow the stories of women speaking up about Biden’s treatment of them to guide an expanded dialogue around sexual misconduct. This news cycle can and should spark long-overdue conversation about a culture that continually subjects women and girls to daily indignities, all while laughing off our complaints about what makes us feel uncomfortable and unsafe. We can’t move forward until we are willing to recognize how “jokes” about supposedly overly sensitive, overreacting women allow sexual misconduct to continue.