As part of the state Labor government’s 2014 election pitch, one of its key promises was a vast infrastructure rollout. It included the Metro Rail Tunnel, the removal of 50 level crossings and hundreds of millions of dollars to upgrade and build new schools.

It proved a winning formula, returning Labor to power after the Coalition had been in power for just one term. 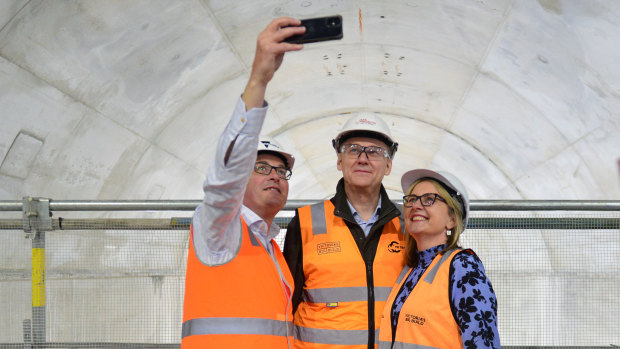 It also began a frenzy of construction in the state that, if anything, has only sped up. When Labor ran for re-election in 2018, it unveiled its plans to build the North East Link (completing the metro ring road), the removal of 25 additional rail crossings and the Suburban Rail Loop.

It had also begun work on the West Gate Tunnel. At the recent election, it promised close to $10 billion for large new hospital projects.

Other states have followed suit. New South Wales is in the midst of spending more than $30 billion on upgrading its public transport and road networks. Not to be outdone, Queensland is bankrolling similar projects worth more than $15 billion. In total, major public infrastructure projects valued at $237 billion are planned across the country over the next five years, with 84 per cent of that in Victoria, NSW and Queensland.

But as Infrastructure Australia made clear this week, this frenzy of building, particularly large transport projects, is going to increasingly result in delays and budget blowouts.

It says the threat to these projects has risen in the past 12 months after the nation’s infrastructure pipeline grew by more than $15 billion.

On top of that, rising costs and a slump in profits had led to a sharp rise in construction companies, including Probuild and Condev, going bust this year, leaving fewer contractors to work on projects. The report also estimates that national labour demand will surge by 42,000 workers to a peak of 442,000 next year – more than double the projected available supply.

Victoria’s infrastructure projects are already no stranger to cost blowouts. The West Gate Tunnel project is three years late and about $4 billion over its original $6 billion budget. The price tag for building the Metro Tunnel has blown out by $2.7 billion.

And yet, for all the red flags being raised, Labor is set to spend just over $21 billion annually on infrastructure over the next four years – significantly higher than the state’s long-term average – as flagship transport projects near completion and others, such as the North East Link toll road and Melbourne Airport Rail project, begin to ramp up.

At a time when the state budget is already under enormous strain – by the middle of 2026, net debt is expected to be $165.4 billion, or 24.8 per cent of the state economy – one has to ask whether Labor’s “big build” needs to be slowed down.

The Age accepts that the recent election results make clear that much of the public does support Labor’s infrastructure program.

It’s also clear that while there are still question marks over the Suburban Rail Link, most of the other projects are long overdue. But ensuring they are being built at a reasonable cost, particularly when the state’s balance sheet is at its weakest point in decades, must be more seriously considered.

The public purse should not be raided purely for political advantage.

Michael Bachelard sends an exclusive newsletter to subscribers each week. Sign up to receive his Note from the Editor.