‘Robert Kennedy found the arteries of our American heart’: Family and friends, including Bill Clinton, commemorate RFK on the 50th anniversary of his death

The Kennedy family were joined by former President Bill Clinton, Minority Leader Nancy Pelosi and others at Arlington National Cemetery to mark the 50th anniversary of Robert F. Kennedy’s death on Wednesday.

The former U.S. attorney general and New York senator was running for president on June 5, 1968, when he was shot at the Ambassador Hotel in Los Angeles by a 25-year-old Palestinian man angry over his support of Israel in the Six-Day War.

Kennedy died the following day, leaving behind his wife Ethel and their 11 children.

While Ethel, 90, didn’t speak at the event on Wednesday, she sat in the front row, flanked by her children, grandchildren and great-grandchildren, wearing a cheery white dress and blazer.

The couple’s eldest child, Kathleen Kennedy Townsend, grandson Congressman Joe Kennedy III, and former President Bill Clinton were among the many to pay tribute to the late politician at the event. Had he survived, he would have been 92 today. 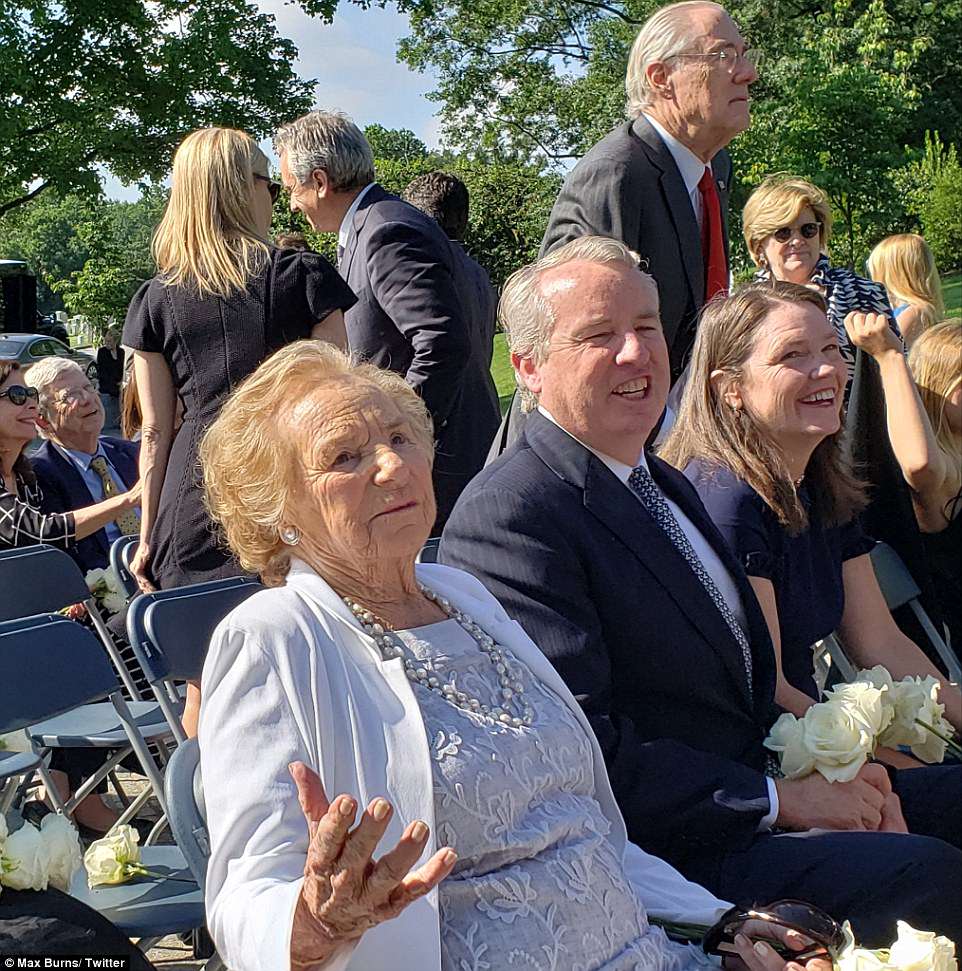 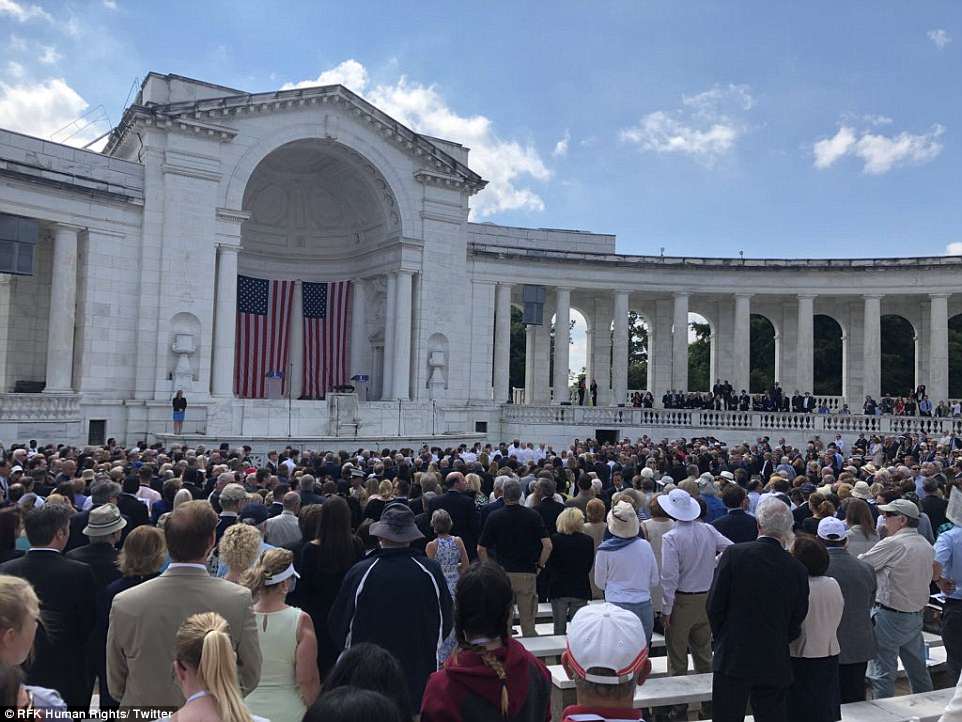 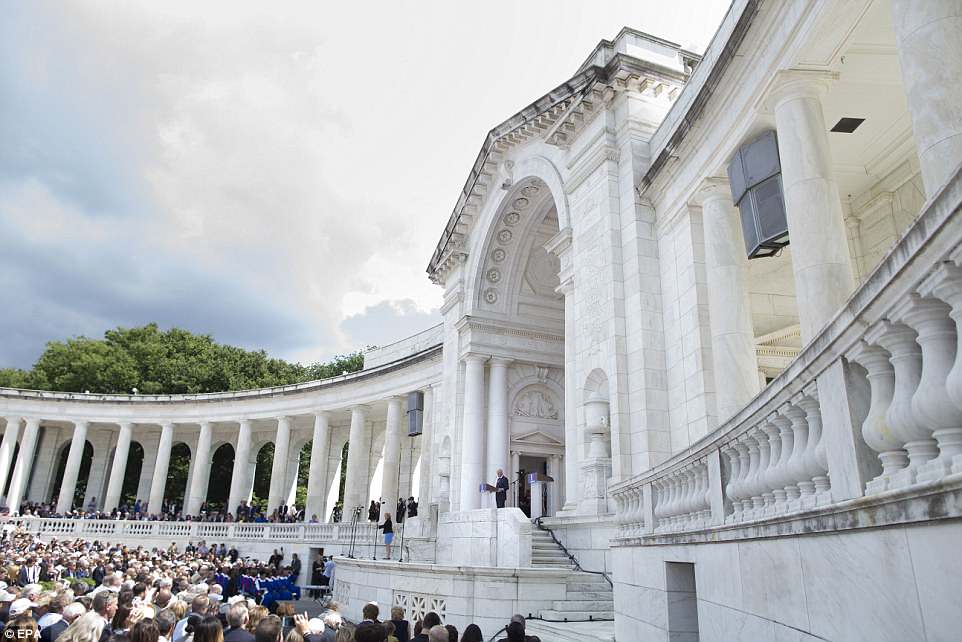 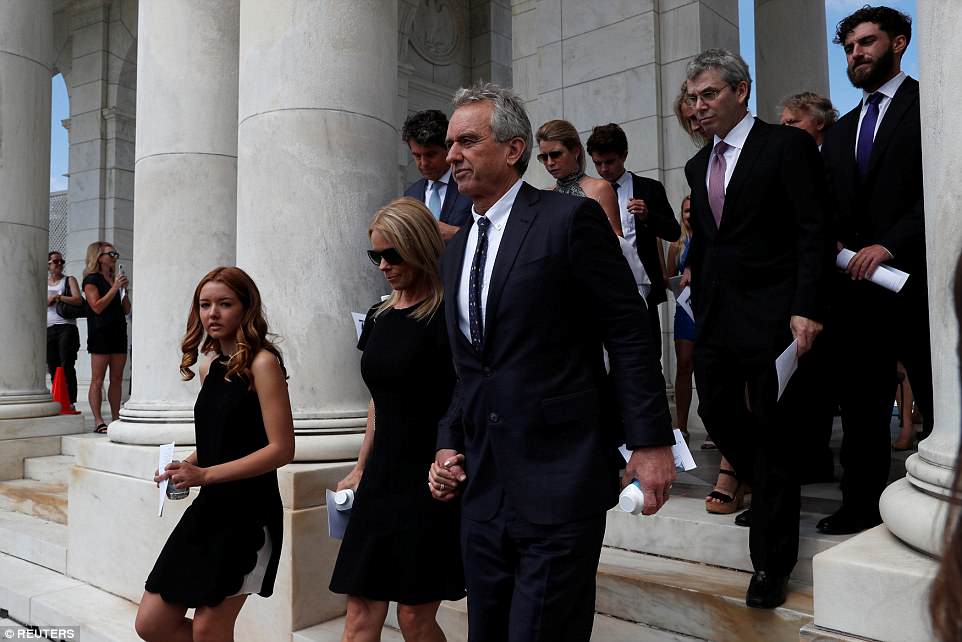 Robert F. Kennedy Jr is seen arriving for the service with his wife, actress Cheryl Hines 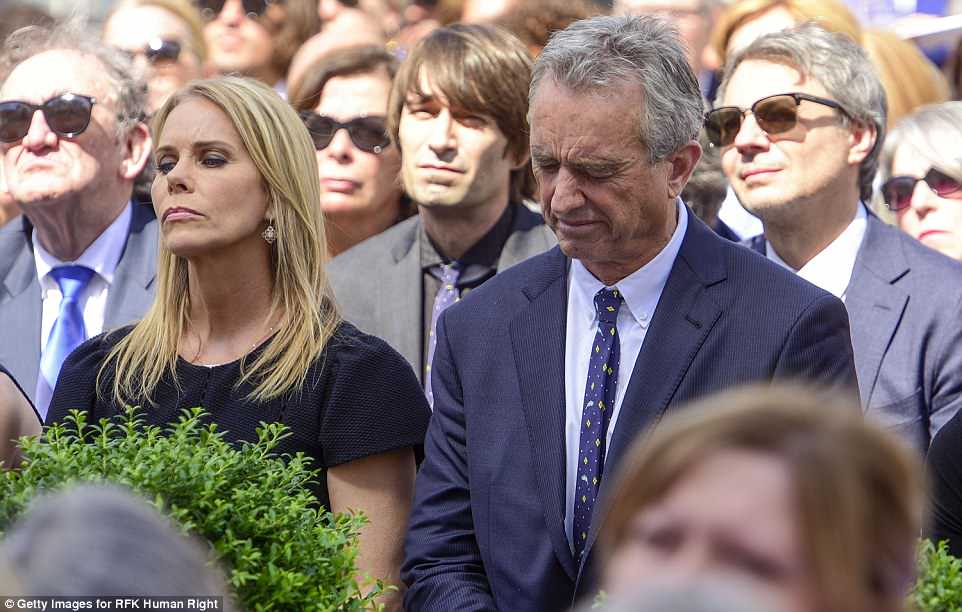 RFK Jr was seen getting emotional later in the service, sitting next to his wife 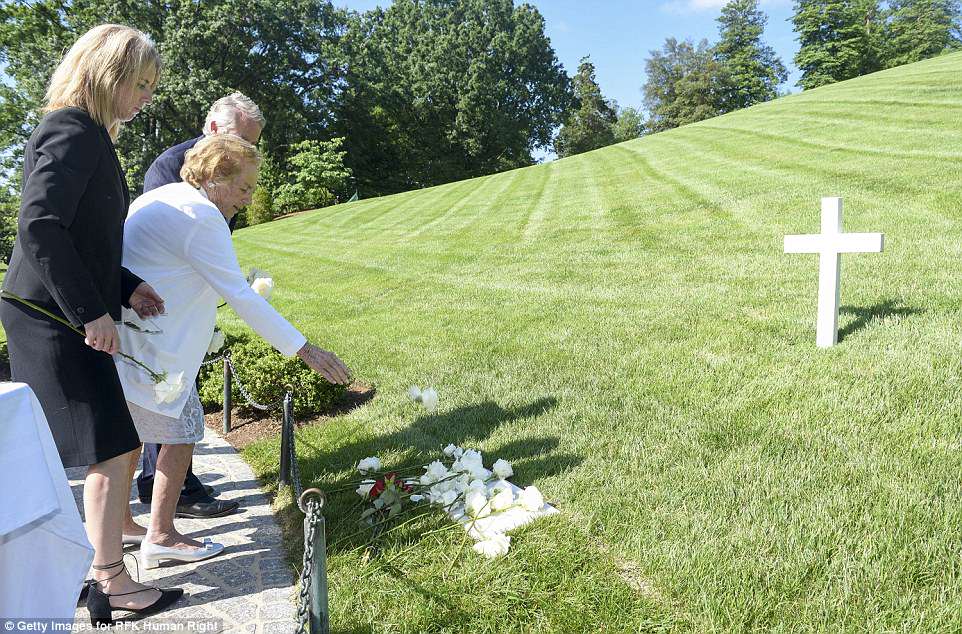 Congressman Kennedy gave one of the most moving speeches of the event, saying ‘Robert Kennedy found the arteries of our American heart’.

‘Countless words have been used to remember my grandfather. Poetry has been written for the work he did and the life he lived.

‘But for a man who loved language, it’s the images that tell his story best. The caress of a child’s face in a shotgun house in the Mississippi Delta, his hand on the shoulder of a coal minor in eastern Kentucky, a small piece of bread shared with Cesar Chavez in a dusty field in Delano.

‘Images of a father, a son, a brother, a husband, an uncle. Of a family home adorned to this day with photos of loved ones, graduations, weddings, silly moments with grandkids, great-grandkids, his brood ever growing, his love enduring.

‘Of his extraordinary wife and partner who 50 years after his passing still wears her wedding ring. Of a family who strives every day to make him proud. Those images accumulate here today,’ Kennedy wrote. 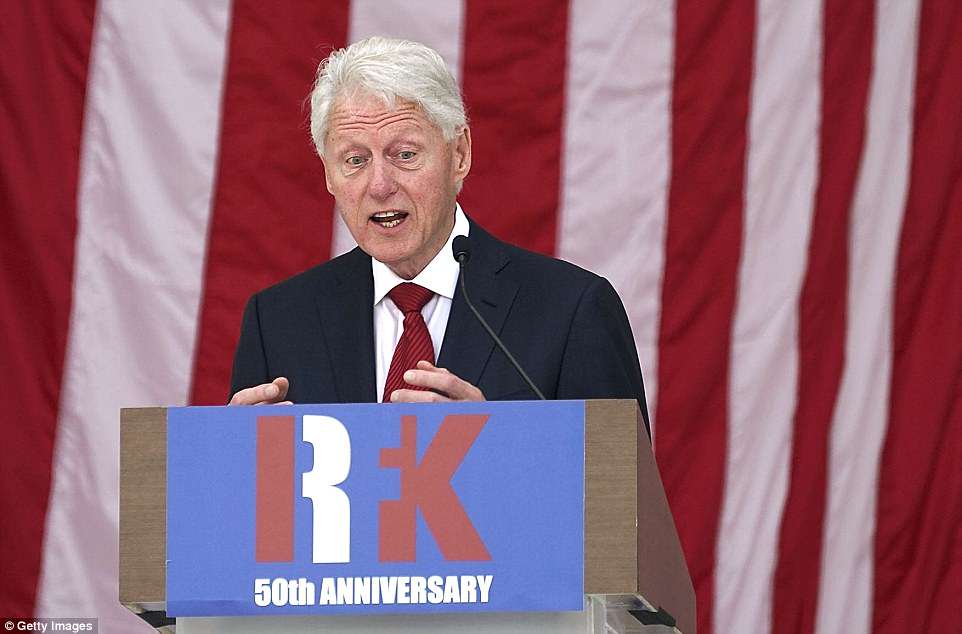 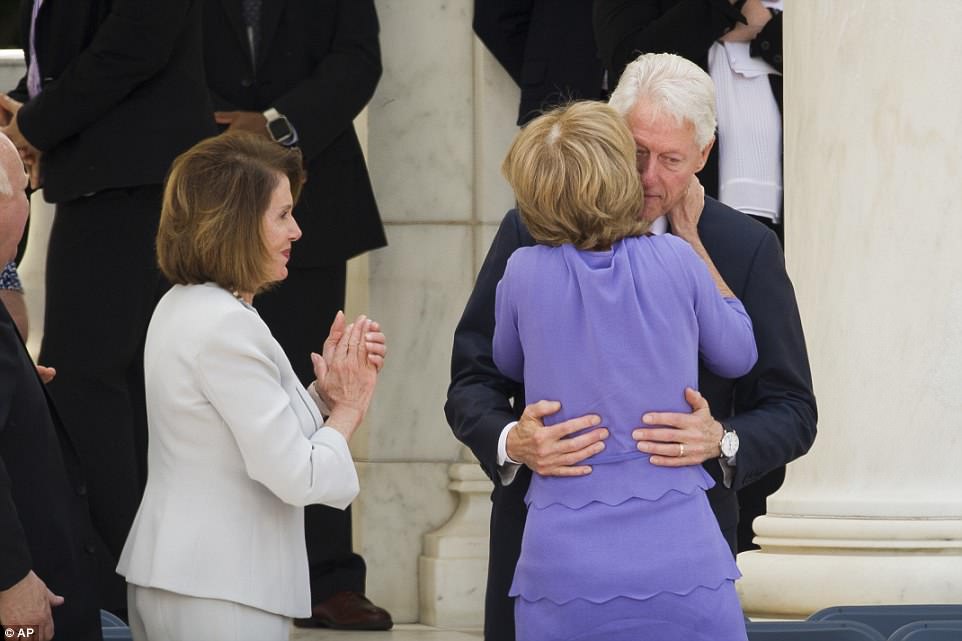 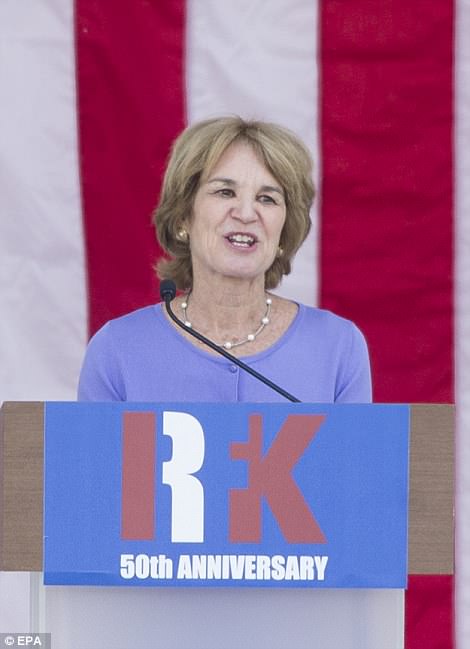 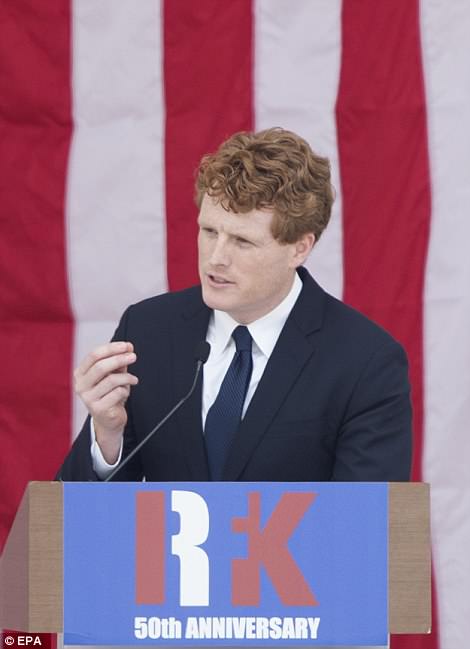 RFK’s eldest daughter, Kathleen (left), and one of his many grandchildren, Congressman Joe Kennedy III (right) also spoke at the event 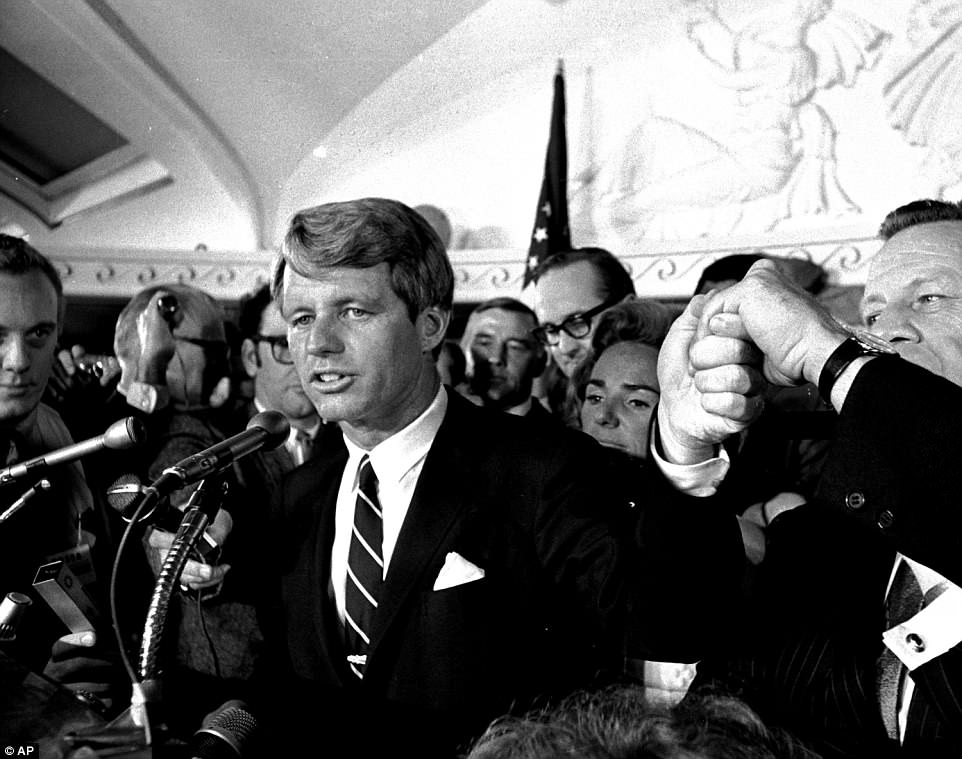 Bobby Kennedy is seen speaking at the Ambassador Hotel in Los Angeles on June 5, 1968, just moments before he was shot dead

Kathleen Kennedy Townsend, Bobby Kennedy’s eldest child, was among the first to speak at the packed event.

‘It is tough to lose a parent. It was very painful to lose my father. And yet a half-century later, each of you have come here…you share our deep sense of loss and our happy memories,’ she said.

The crowds of people who came from as far as Italy and Ireland are a ‘deeply moving tribute to the love my father inspired,’ she said.

‘Thank your for remembering,’ she added.

Former President Bill Clinton gave one of the longer speeches, recalling the moment he learned of his political idol’s death. 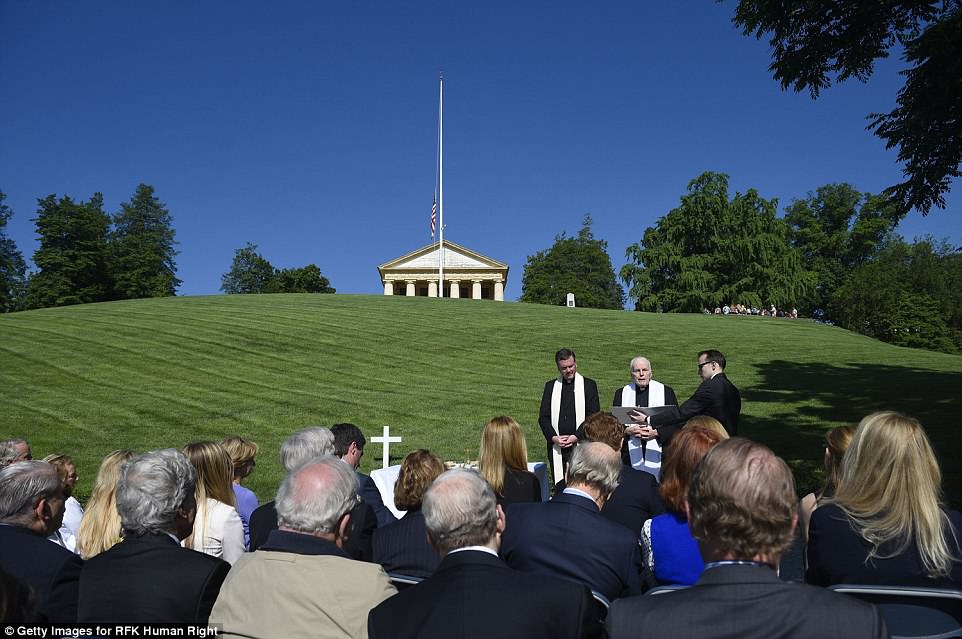 The Kennedy family laid flowers at Kennedy’s grave site on Wednesday, not far from where his brother, president John F. Kennedy is also buried 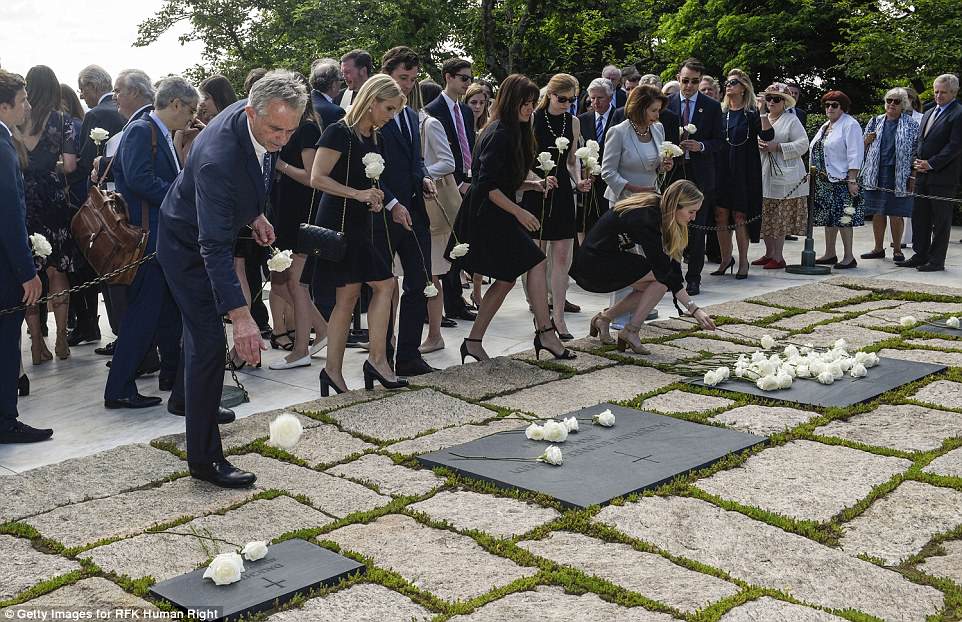 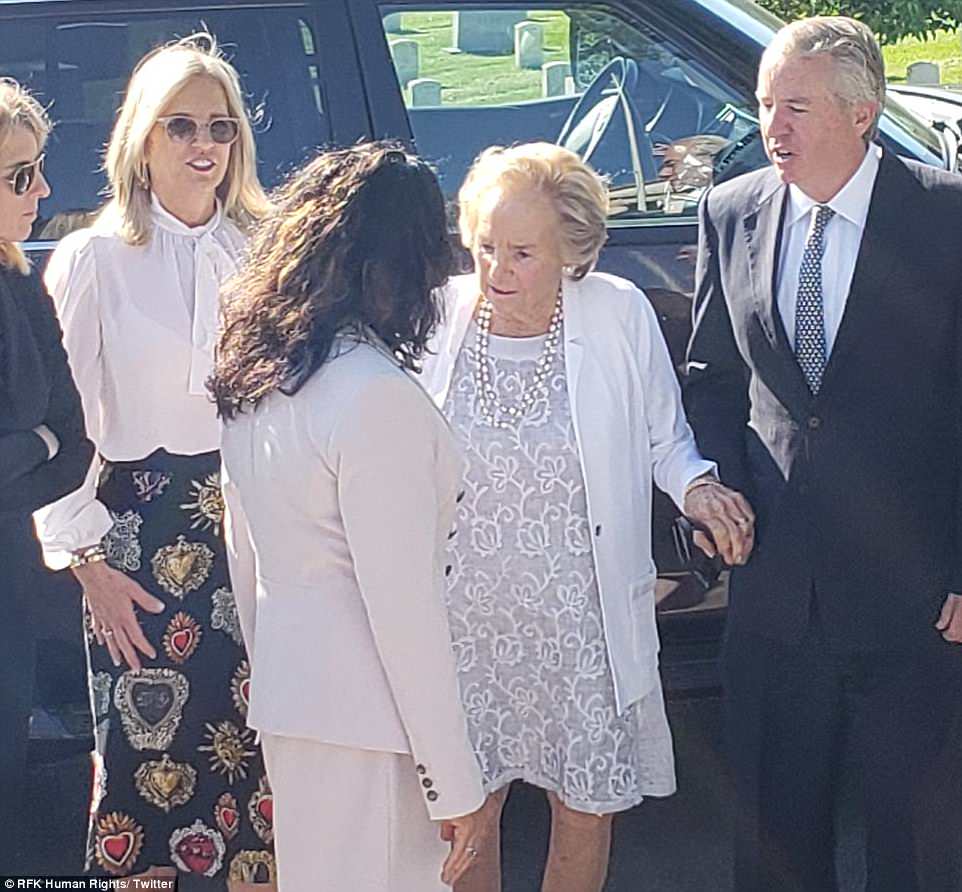 Ethel Kennedy is seen arriving for the ceremony, wearing a cheery white frock 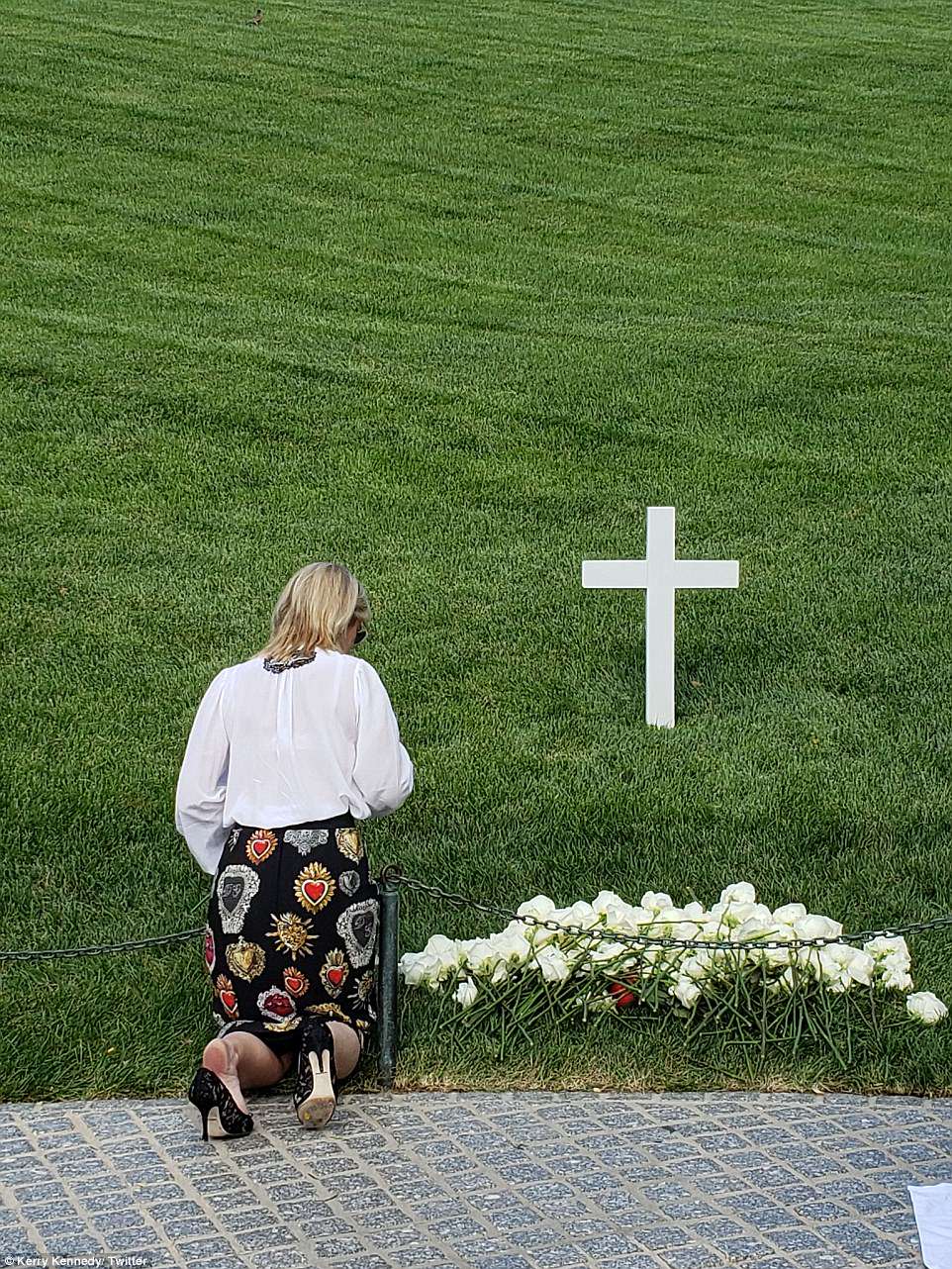 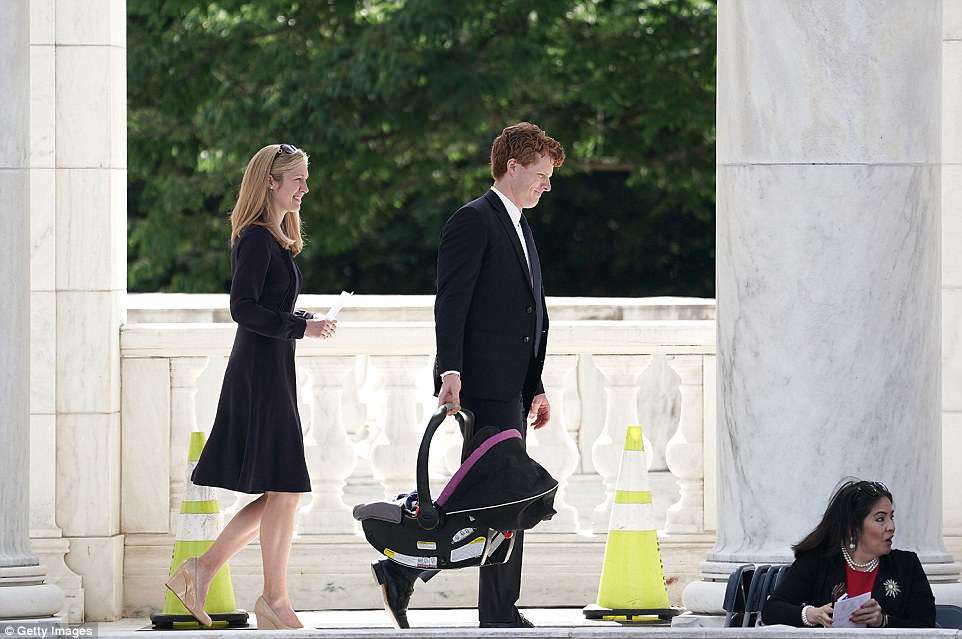 U.S. Rep. Joe Kennedy III (D-MA) arrives with his wife Lauren Anne Birchfield at the memorial service of his grandfather on Wednesday. He carried a car seat for his the couple’s youngest child, six-month-old son James Matthew Kennedy 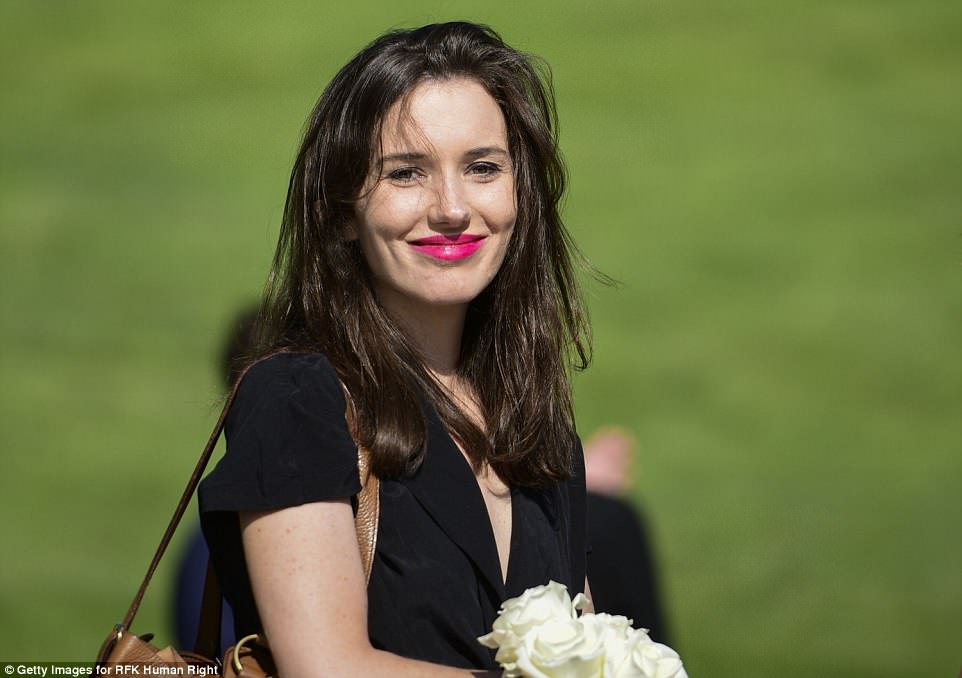 The occasion marked what appeared to be the first public outing for Kick Kennedy, RFK Jr’s daughter, since she lost her billionaire boyfriend Matthew Mellon in April

‘When he died early the morning of June 6, one of my roommates was volunteering in his office and we stayed up to watch him. [When I went to bed I woke up] to him beating on me saying “They shot him, they shot him!”‘ he said.

At another point in the speech, Clinton spoke about the tremendous energy Kennedy inspired at his events.

‘We thank him after 50 years because we can still feel the energy in the parades…we can do it all over again. But we have to do it the way he did. Speaking to everybody, saying the same thing to everybody, with a heart full of love and an outstretched hand. His legacy has brought us here and will see us on,’ he said.

Country singer Kenny Chesney performed a cover of Woodie Guthrie’s ‘This land is your land’. 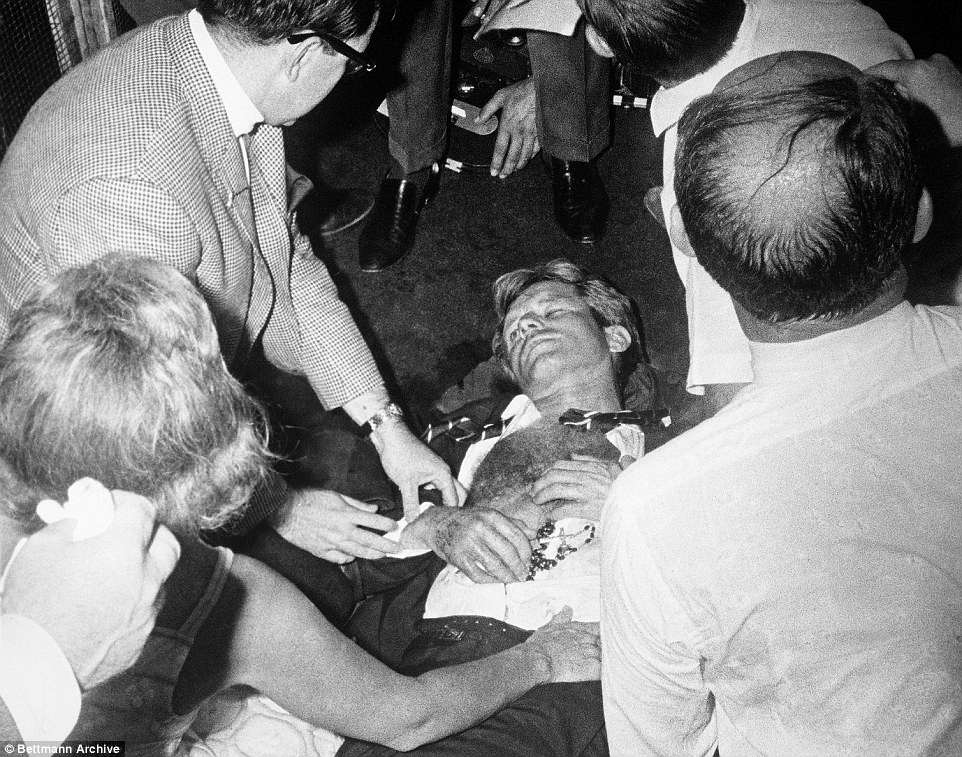 Before the performance, Chesney said that he has gotten to know Kennedy’s widow and their children and grandchildren over the past year.

‘That being said, I believe in my heart of hearts that Bobby Kennedy carried the promise of this song in his heart to the day he died,’ Chesney said.

Throughout the ceremony, representatives of organizations that were in the spirit of Kennedy’s mission, as well as politicians and former colleagues, took to the stage to read from some of Kennedy’s speeches.

Congressman John Lewis got choked up when he read his RFK speech, which was given after the death of his friend and fellow Civil Rights leader Martin Luther King Jr. 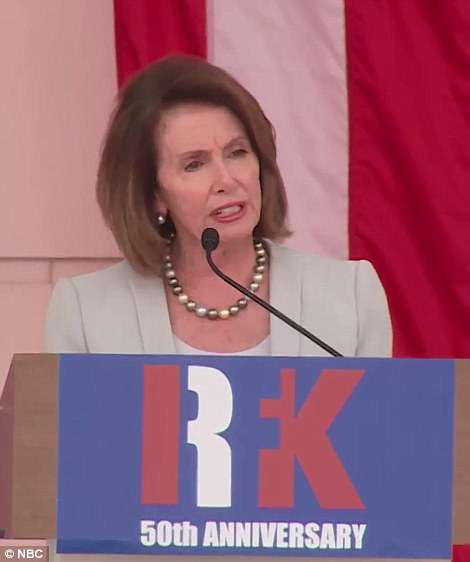 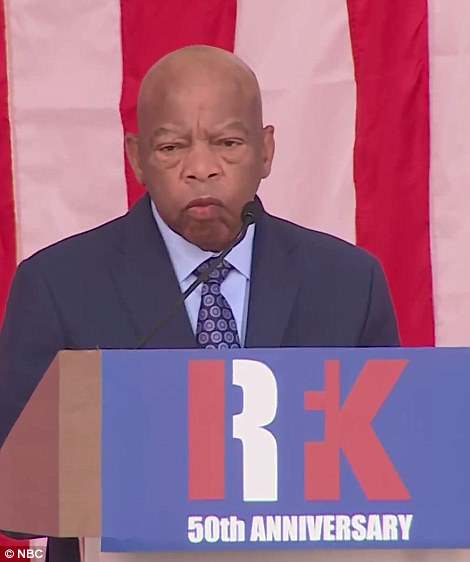 Minority Leader Nancy Pelosi, left, and Congressman John Lewis, right, also spoke at the event, sharing quotes from RFK. Lewis got choked up as he read his quote, which was made on the assassination of his Civil Rights-era ally, Martin Luther King Jr. 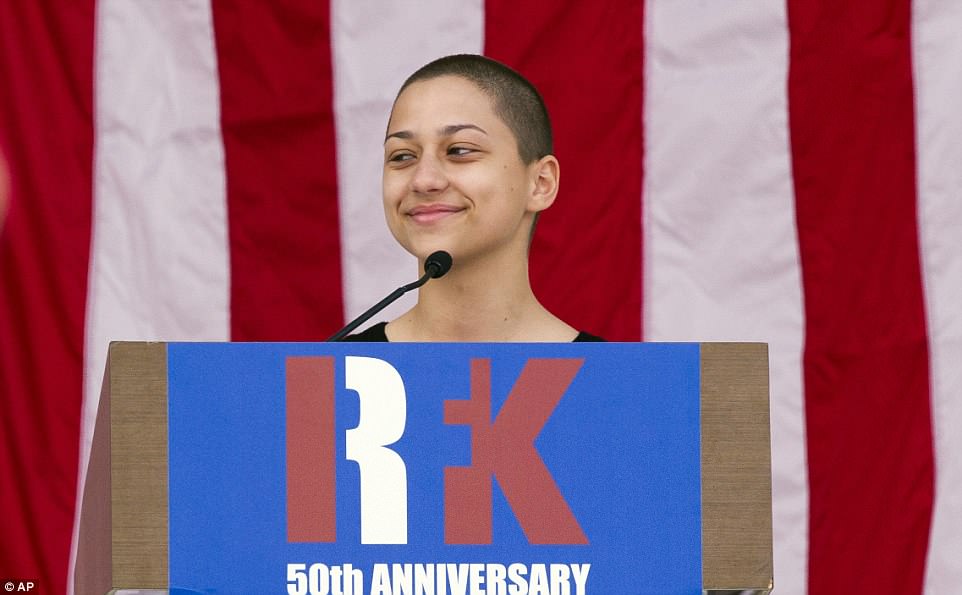 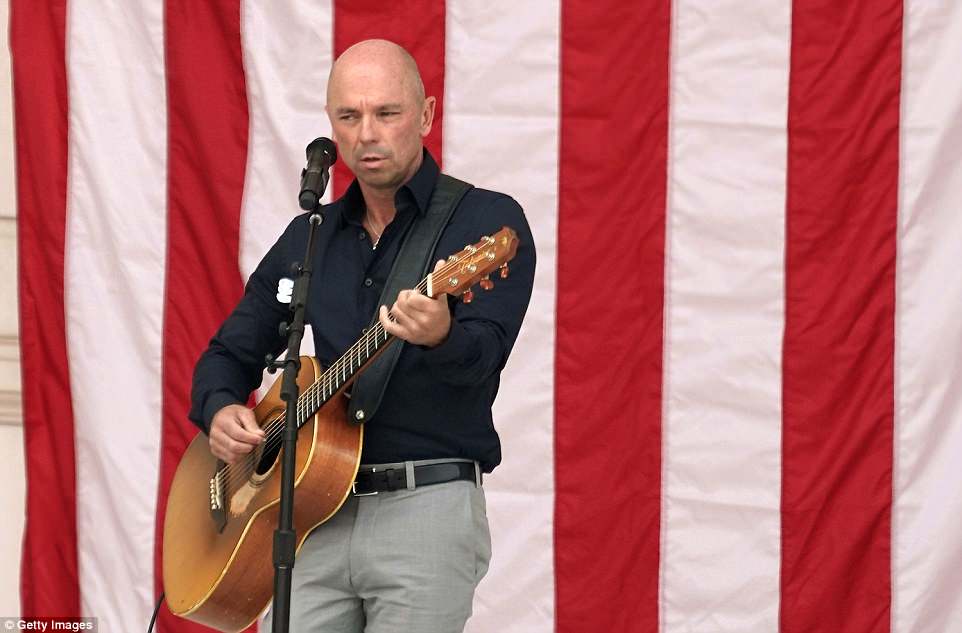 In addition to the ceremonies at Arlington, a special exhibition is planned at the home in suburban Boston where Kennedy was born.  The nine-room birthplace in Brookline has family furnishings, photographs and mementos on display.

The anniversary was not marked by the president, but Vice President Mike Pence issued his own statement on Twitter about the beloved Democrat.

‘Today marks 50 years since the passing of #RFK—a figure who inspired my youth and inspires me still,’ Pence wrote. ‘America will never forget his speech in Indianapolis the night of MLK’s assassination. He spoke words that brought comfort and unity to the American people.’ 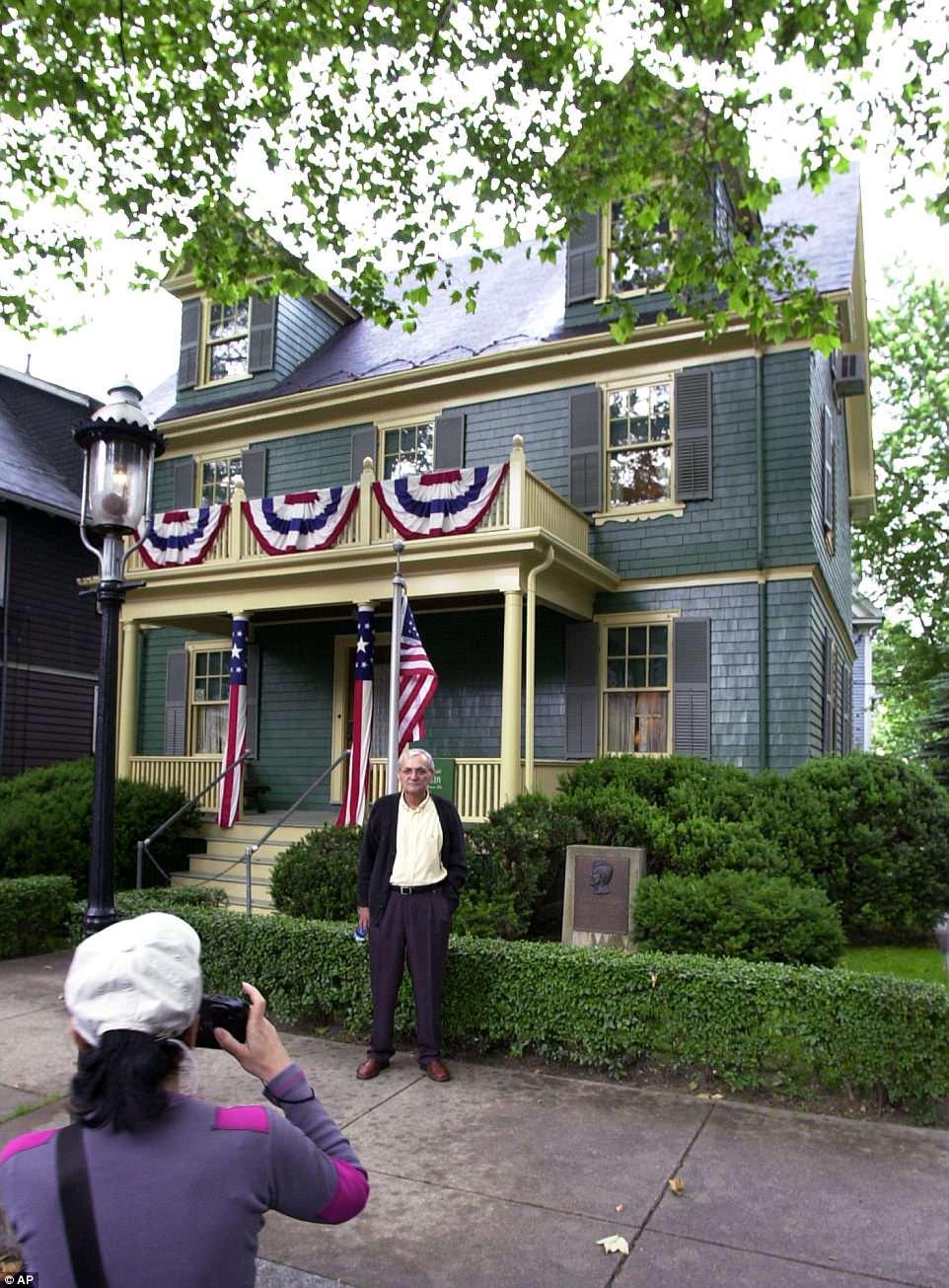 The Brookline, Massachusetts home where RFK was born (pictured above in 2002) is also marking the day with an exhibit