As one of the world’s richest men and most active philanthropists, Bill Gates usually has his hands full. Just not with poop.

So it came as a surprise when the founder of Microsoft brandished a jar of human waste at a forum on the future of the toilet in Beijing on Tuesday.

The stunt was an effort to draw attention to a problem affecting developing countries around the world: not enough toilets. 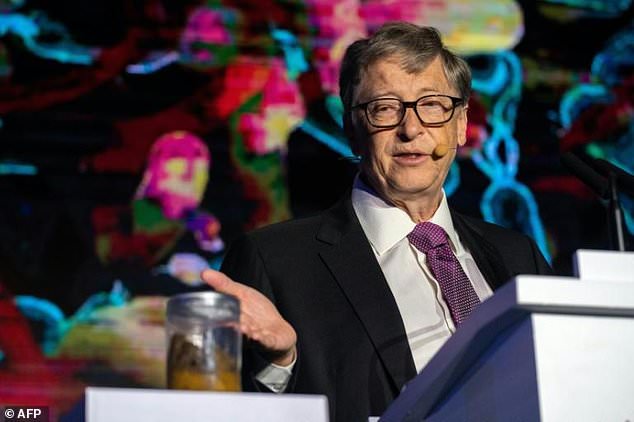 Microsoft founder Bill Gates talks next to a container with human feces, a stunt to draw attention to the lack of toilets in developing countries around the world 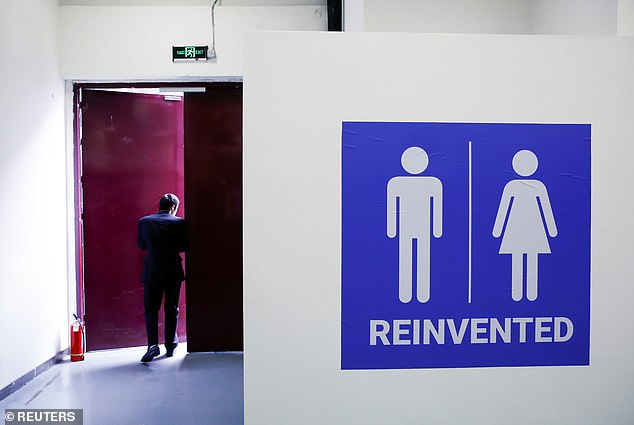 A man walks near a toilet sign at the Reinvented Toilet Expo showcasing sewerless sanitation technology in Beijing. More than half of the world’s population suffers without clean facilities 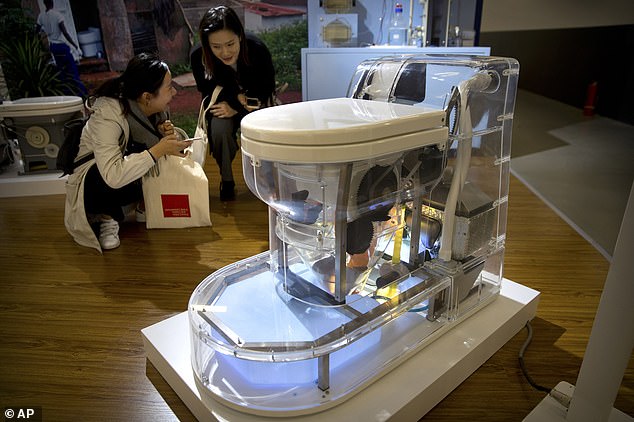 ‘In places without sanitation you have got way more than that,’ Gates said, pointing to the feces inside the clear canister resting on a table.

‘And that’s what kids when they are out playing, they are being exposed to all the time, and that’s why we connect this not just with quality of life, but with disease and death and with malnutrition,’ he told attendees.

The billionaire said more than half of the world’s population suffers without clean, comfortable sanitation facilities. 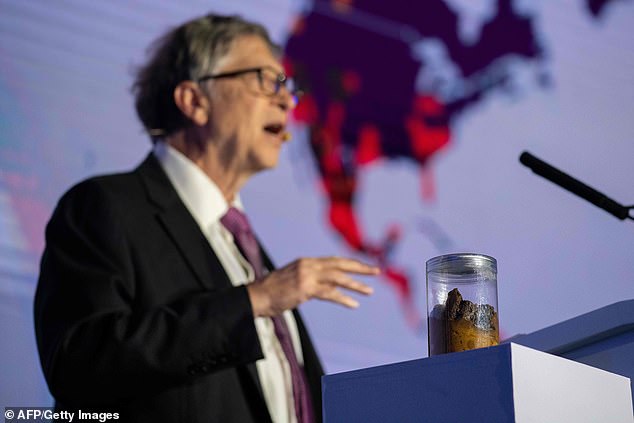 ‘When you think of things that are basic right up there with health and enough to eat, you think that having a reasonable toilet certainly belongs on that list,’ Bill Gates said at the forum 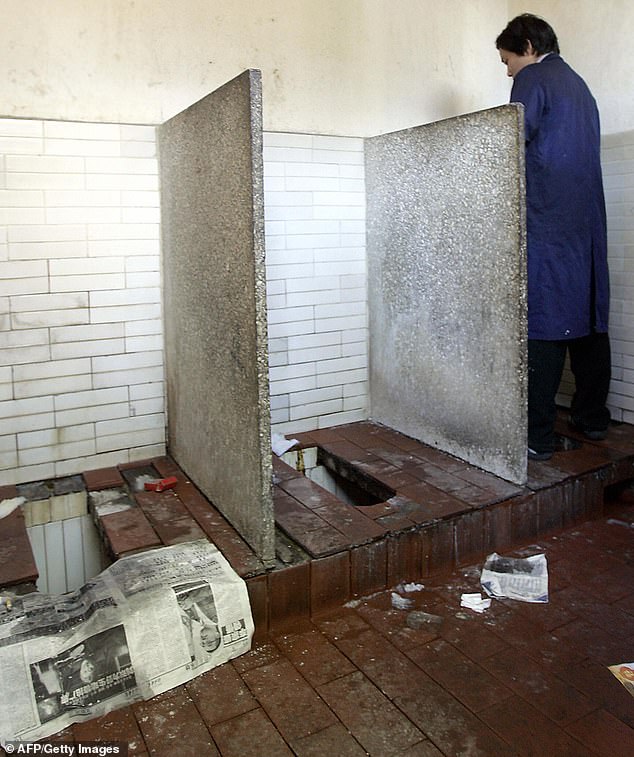 A Chinese man uses a public toilet in Beijing in 2004. China has been reforming its public facilities since 2015 in a ‘toilet revolution’ that targets rural areas and tourists attractions 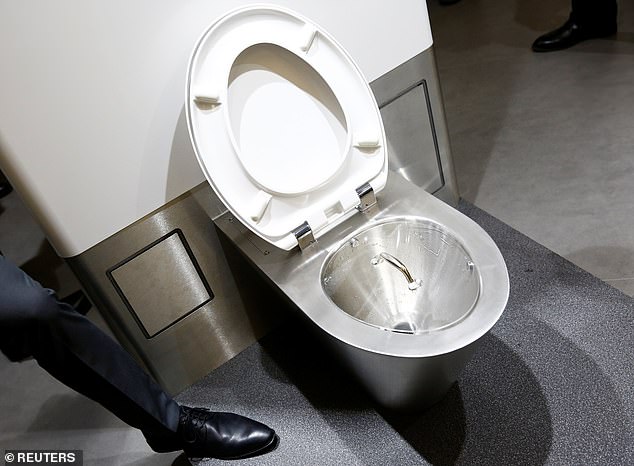 A toilet design by Helbling at the Reinvented Toilet Expo on Tuesday hosted by the Bill & Melinda Gates Foundation showcasing sewerless sanitation technology in Beijing, China 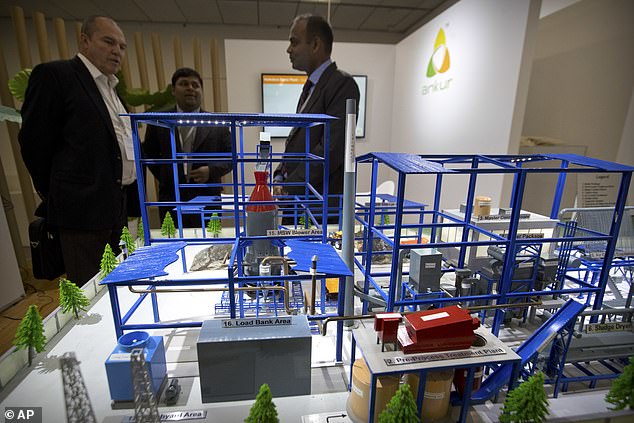 ‘When you think of things that are basic right up there with health and enough to eat, you think that having a reasonable toilet certainly belongs on that list,’ Gates said.

Gates has previously used shock tactics to draw attention to his disease-battling efforts.

In 2009, he loosed mosquitoes at a Technology, Entertainment, Design (TED) Conference in California to make a point about the deadly sting of malaria – waiting a minute or so before assuring the audience the liberated insects were disease-free.

Gates was in Beijing on Tuesday for the ‘Reinvented Toilet Expo’, a forum hosted by the Bill & Melinda Gates Foundation showcasing various cutting edge toilet technology in lieu of sewers, making them easier and cheaper to install the devices.

The world’s number two economy is in the midst of a drive to improve its notoriously malodorous bathrooms, a campaign President Xi Jinping has dubbed the ‘toilet revolution.’ 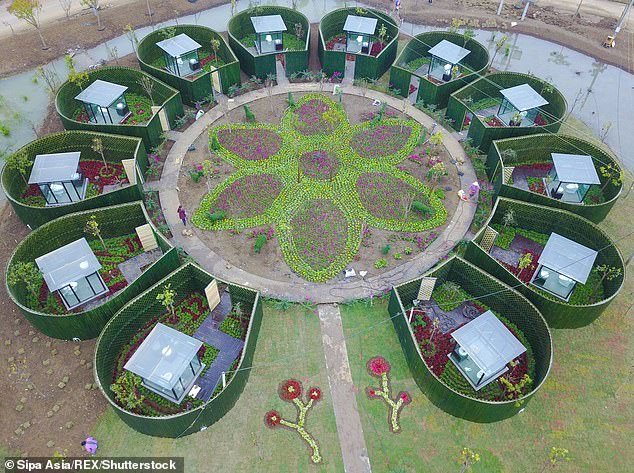 Environmental friendly public toilets are built in Anlong, south-west China’s Guizhou province. China is in the midst of a drive to improve its notoriously malodorous bathrooms 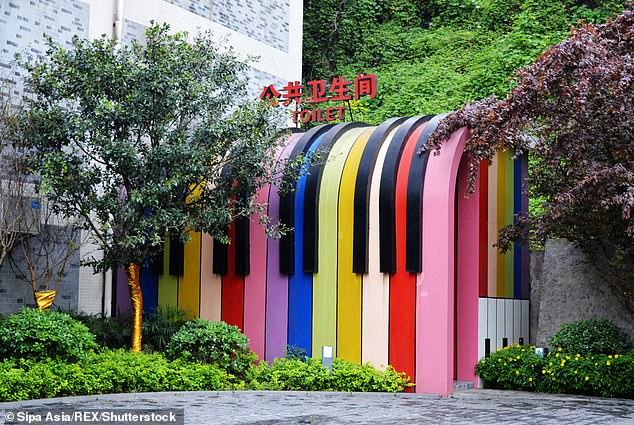 ‘China has made great progress in improving health and sanitation for millions of people,’ Gates said.

‘China has an opportunity to launch a new category of innovated non-sewered sanitation solutions that will benefit millions of people worldwide.’

According to UNICEF, 892 million people worldwide have no choice but to defecate in the open.

India’s government says its public health drive has slashed the number of people in the country forced to defecate in the open from 550 million in 2014 to less than 150 million today.

What is China’s ‘toilet revolution’?

The ‘toilet revolution’ is an initiative launched by Chinese President Xi Jinping in April 2015 to improve sanitary conditions in mainland China, especially in rural areas and tourists attractions.

Overseas visitors have long complained about poorly maintained or primitive open-pit and squat toilets in the country.

In rural areas, some toilets were little more than makeshift shelters surrounded by bunches of cornstalks, and some were open pits next to pigsties, leading to unhygienic living conditions. 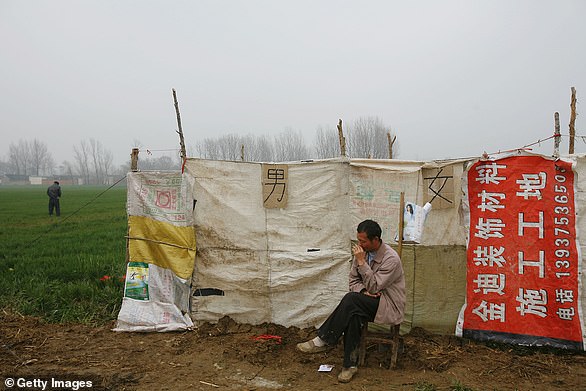 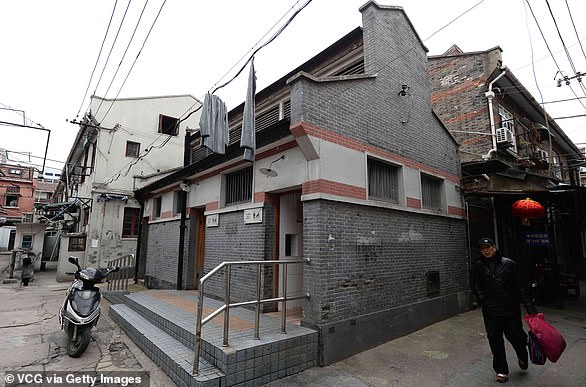 A 73-year-old public toilet is pictured in 2015 in Shanghai, China. Visitors have long complained about poorly maintained or primitive open-pit in the country

Most importantly, the poor sanitary conditions contributed to the spread of diseases such as dysentery, cholera, hepatitis and infectious diarrhoea, according to state broadcaster CCTV.

The overhaul was backed by more than 1 billion yuan (£110 million) in central government funding and over 20 billion yuan (£2 billion) from local authorities.

By Octover 2017, more than 68,000 public bathrooms were reconstructed and upgraded across various tourist destinations in the country – 19 per cent more than the target number, according to Xinhua News.

Some toilets have also been expanded to include bigger unisex cubicles for the disabled, elderly and adults with young children. 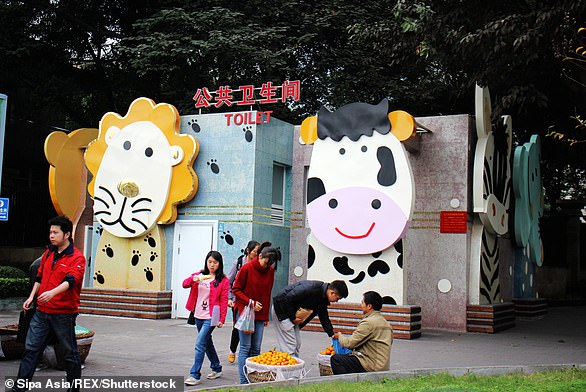 A public toilet in southwest China’s Chongqing. The ‘toilet revolution’ was backed by more than 1 billion yuan (£110 million) in central government funding 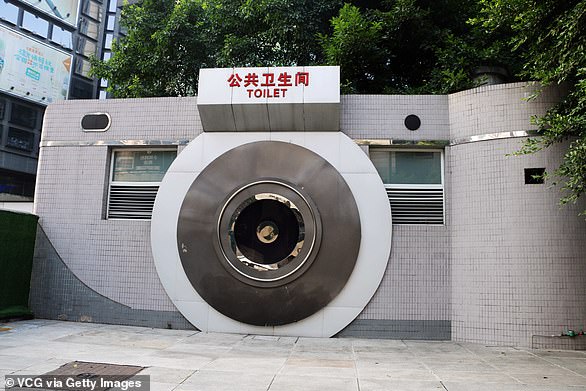 A camera-shaped public toilet is at Shiqiaopu Street in Chongqing. Another 64,000 public toilets are set to be installed or upgraded at tourist spots from 2018 to 2020

Another 64,000 public toilets are set to be installed or upgraded at tourist spots from 2018 to 2020, according to an action plan released by the China National Tourism Administration.

The construction of clean toilets is an important part of pushing urban and rural civilisation, and more efforts should be made in both cities and rural areas to upgrade toilets, Xi previously said.

Along with the toilet revolution, China should construct better public facilities and services to boost the tourism industry, Xi added.