The business brains and money men at Allen & Co have never made much of a splash with their style, but the conference has been getting a much needed style infusion over the past few years.

That is thanks in large part to a handful of fashion designers who have been attending the Sun Valley event for the past decade and adding some much needed color and flair to the denim-and-fleece landscaped.

The sartorially-starved conference welcomed a number of these women this year, with Diane Von Furstenberg, Jerry Hall Stacey Bendet and Tamara Mellon among the well-heeled high-rollers in attendance. 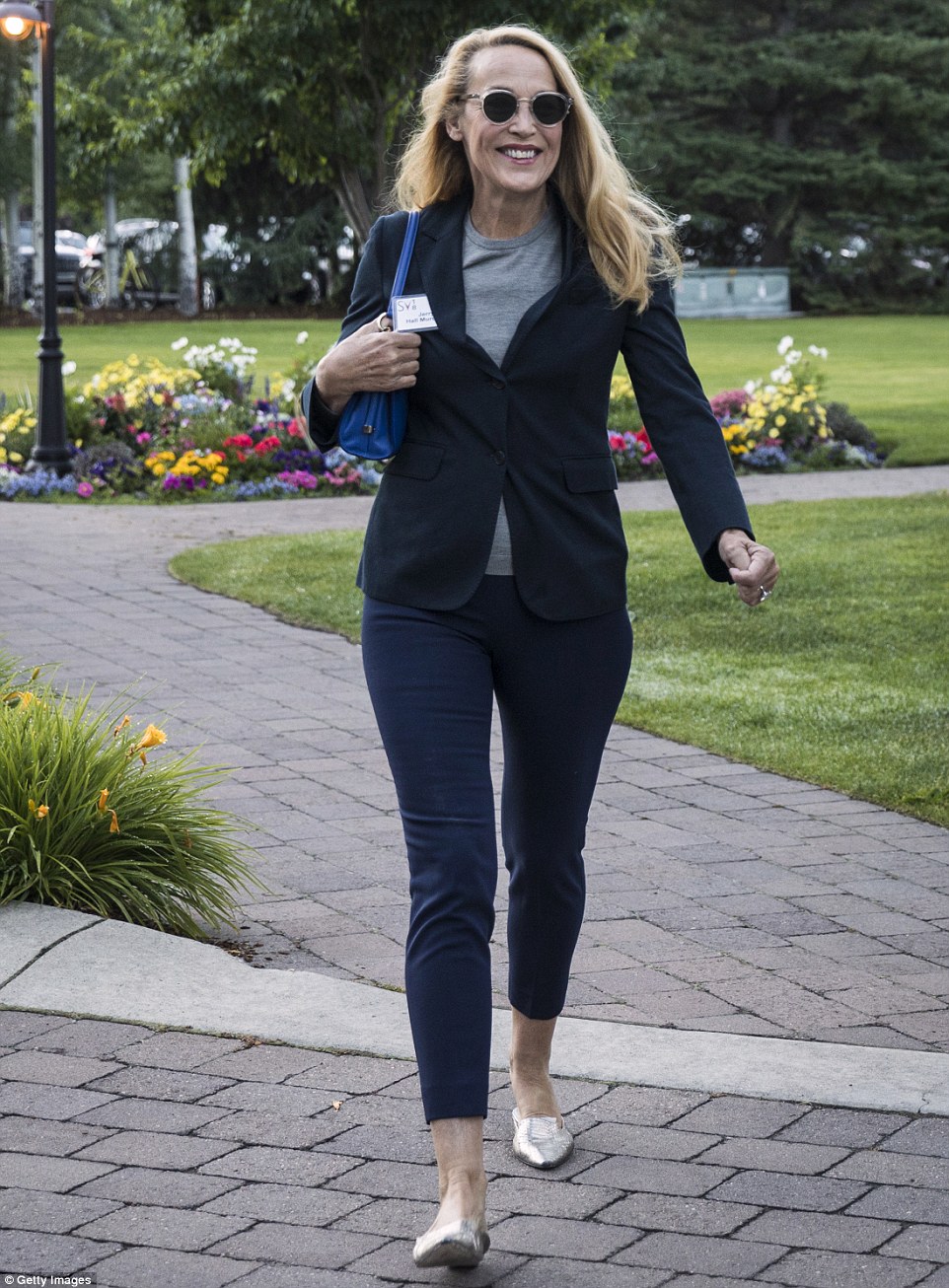 Model mayhem: Jerry Hall (above on Thursday) is attending the Allen & Company conference in Sun Valley this week, with the model part of a new crop of stylish guests 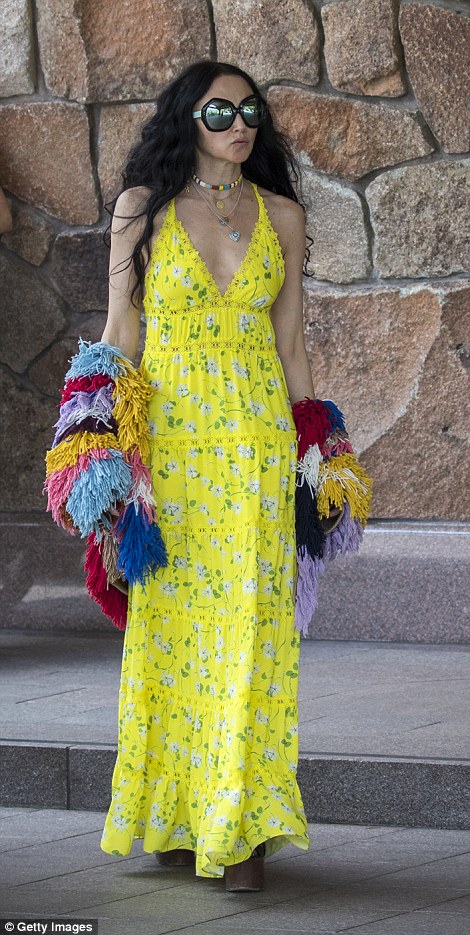 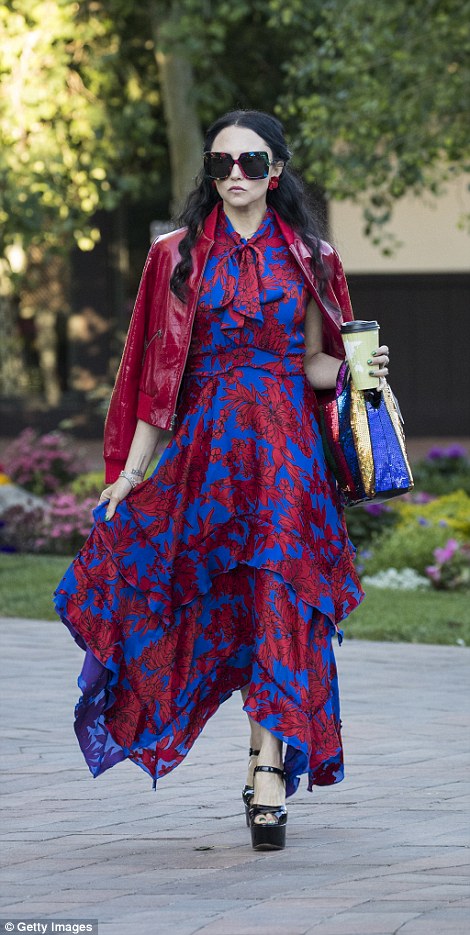 Punky Brewster: Stacey Bendet, the creative director and CEO of Alice & Olivia is also in Sun Valley with her husband Eric Eisner, and has donned six looks in 48 hours (Tuesday afternoon on left, Wednesday morning on right) 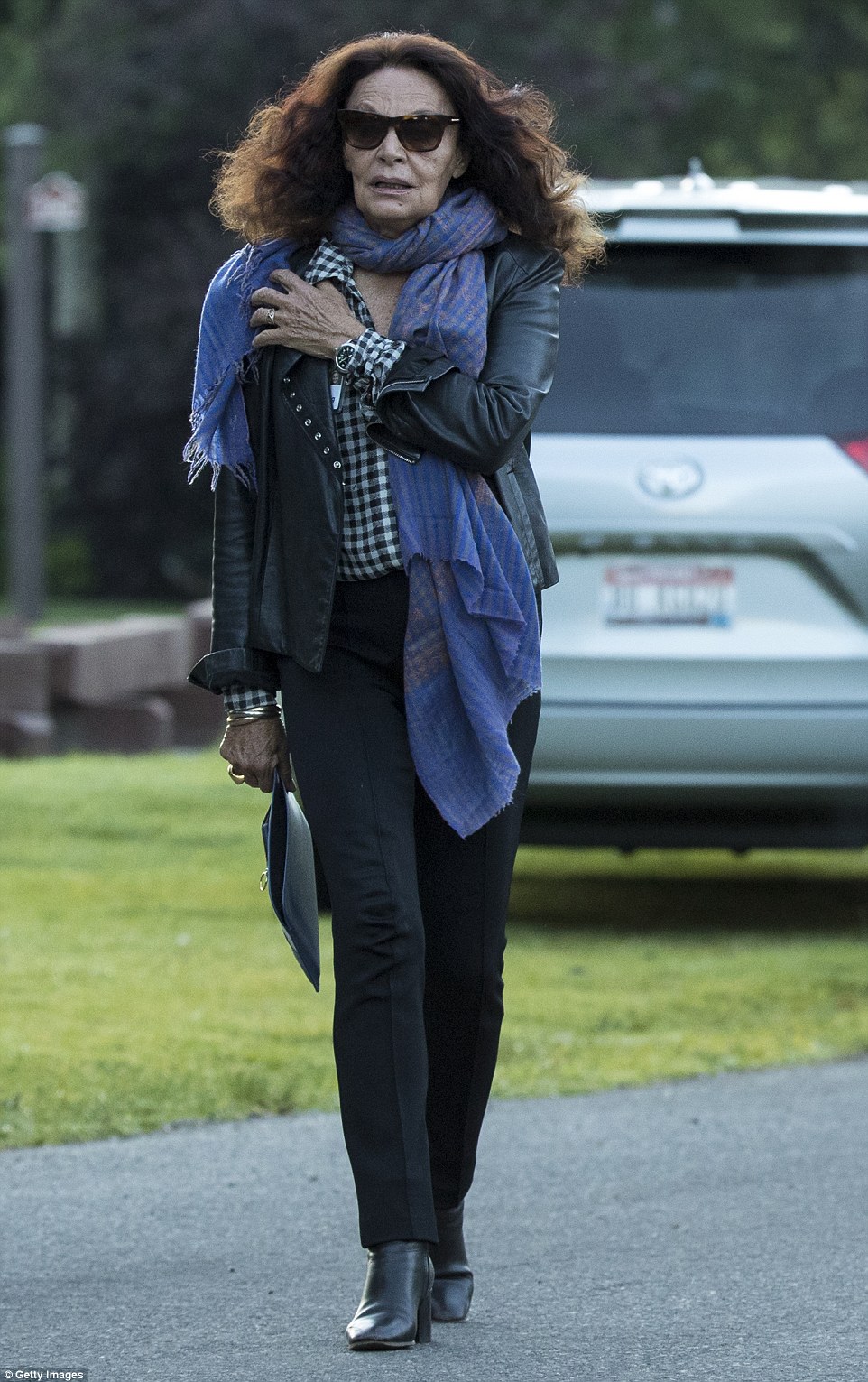 Understated luxury: Diane von Furstenberg (above on Thursday) has returned for another years with her husband Barry Diller, and one more hosted a pop-up shop to sell her wears to guests 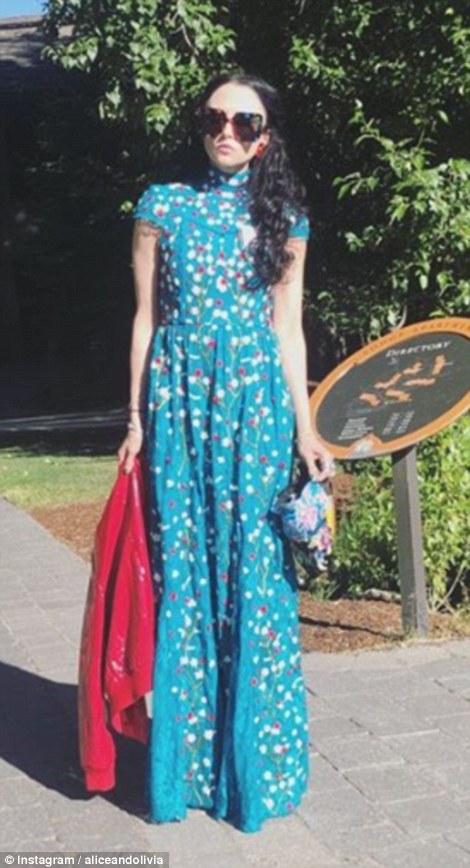 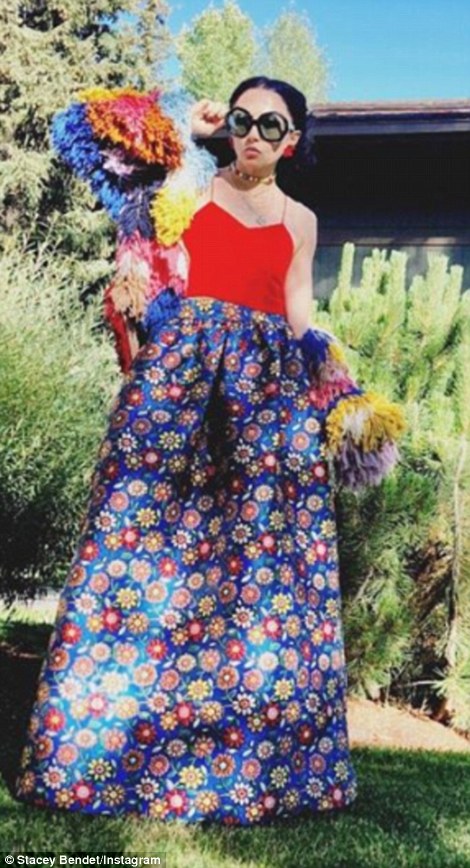 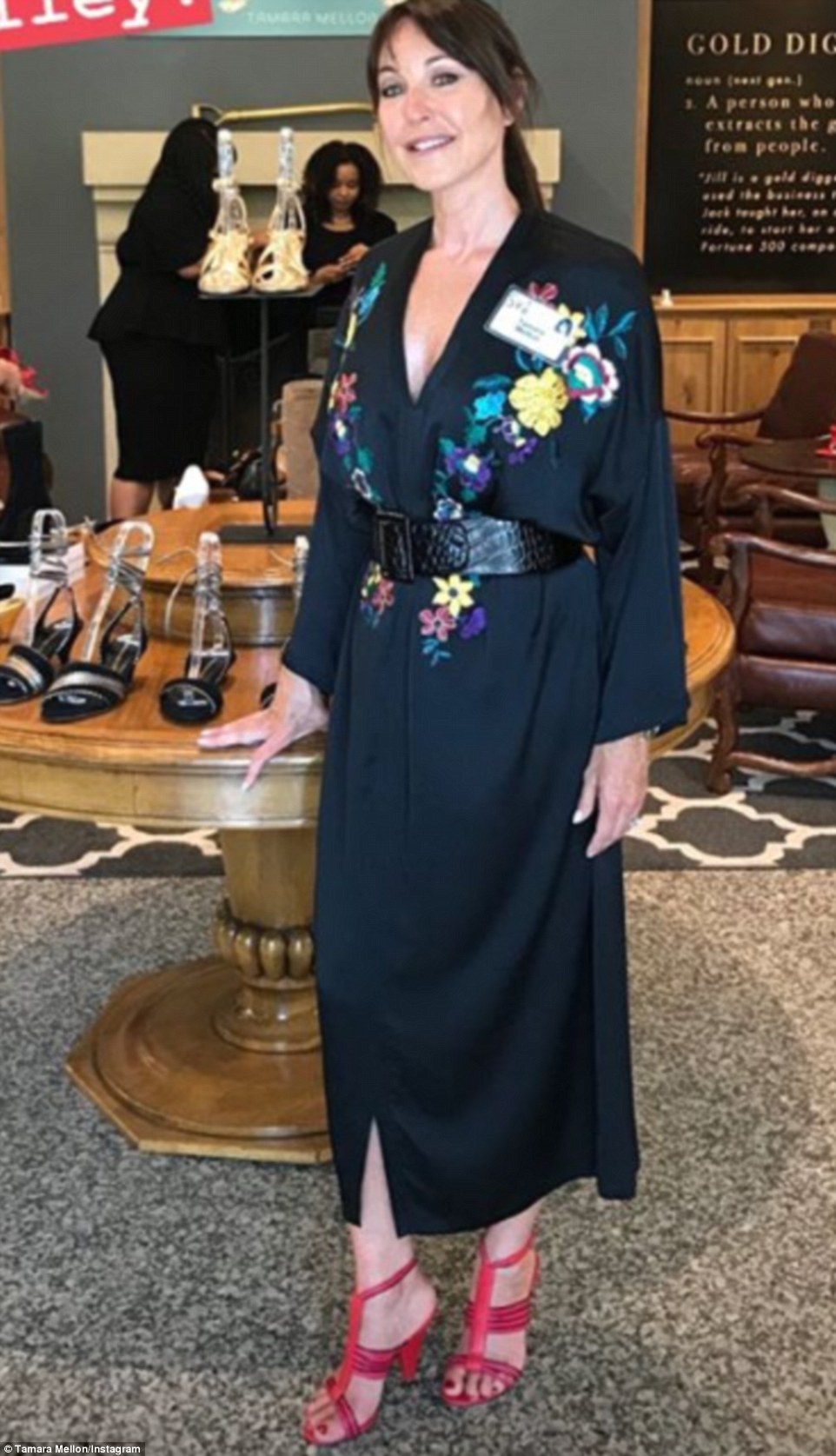 The bling ring: Tamara Mellon (above on Wednesday) attended with her fiance Michael Ovitz and hosted a pop-up shop for her new Gold Digger collection of shoes

Princess of prints: Bendet went for a little bit of leopard early Thursday (left) and a dark floral in the afternoon (right) 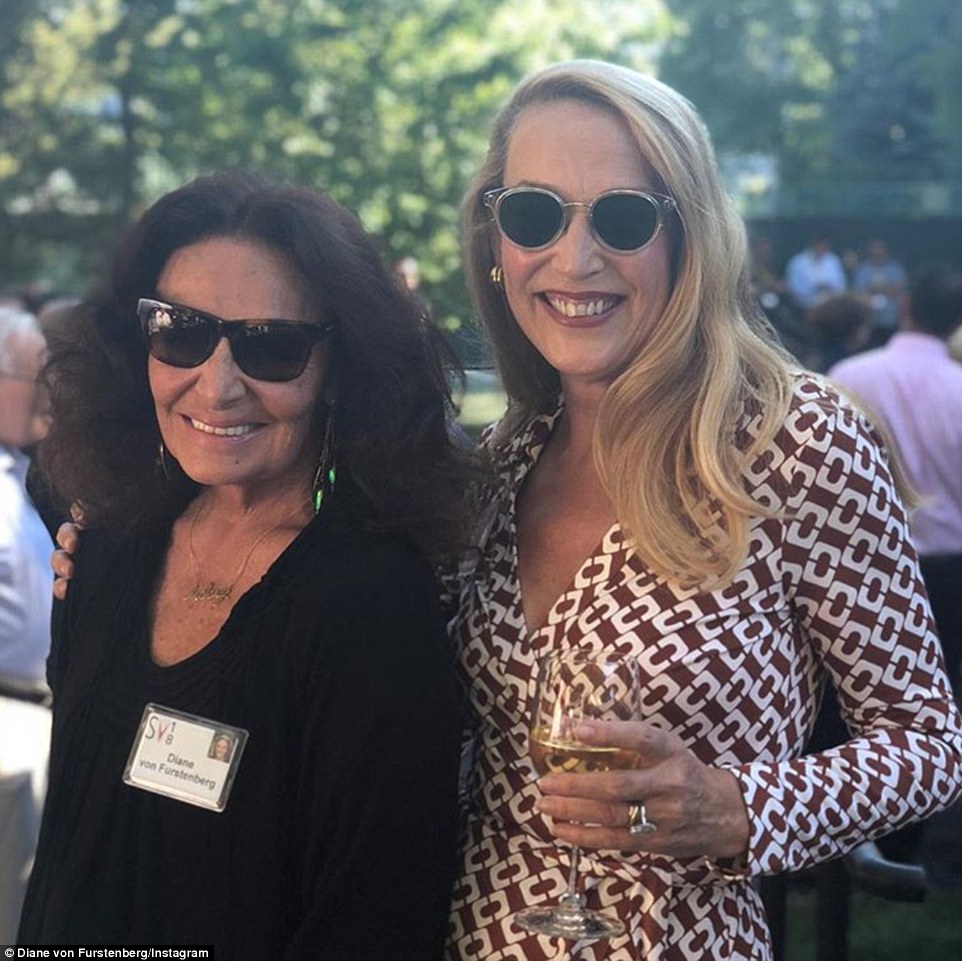 Model and muse: Von Furstenberg revealed on social media that Hall walked in her first ever runway show (pair above on Wednesday) 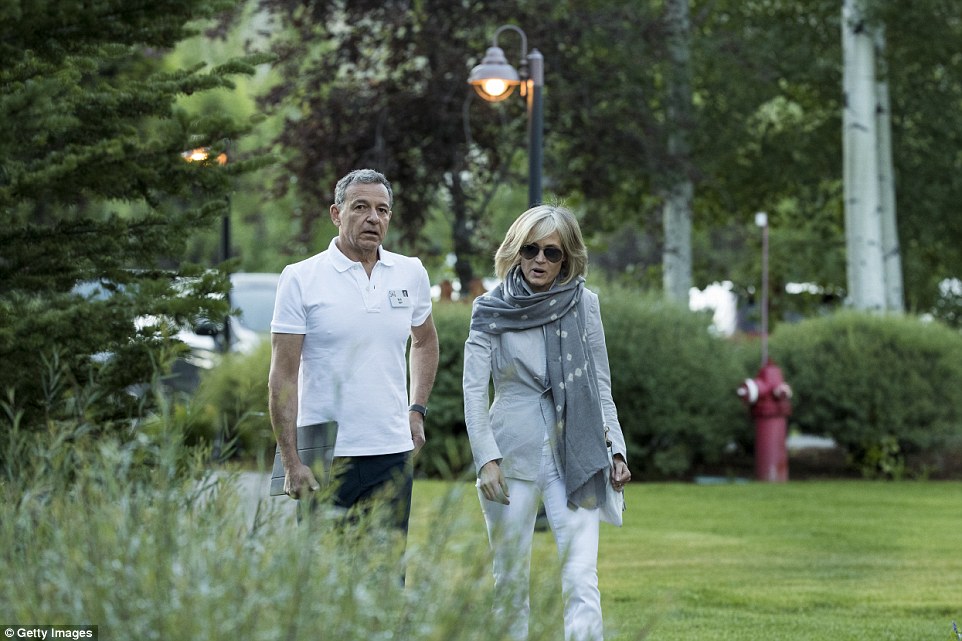 Media power pair: Bob Iger seen above on Thursday with wife Willow who is Dean of the USC Annenberg School for Communication and Journalism

Allen & Company began privately funding the annual conference back in 1983, but it was not until 1994 that the event really took off when The Walt Disney Company’s deal to acquire ABC was put into motion at the event.

The deal was brokered by Warren Buffet, who brought together Tom Murphy and Michael Eisner, then the head of Disney.

Buffet later refereed to this event in a letter to shareholders as an ABWA strategy – acquisitions by walking around.

Twenty-four years later Eisner is back at the conference, as is his daughter-in-law Bendet.

Of all the designers to utilize the power of the conference for their own brands, no one has done a better or more colorful job than Bendet, 39, who attended with husband Eric Eisner.

Each day she dons at least two head-to-toe looks from her line Alice and Olivia, knowing that her taste bold and bright ensembles combined with her jet black hair and alabaster skin will draw the eyes of photographers at the event.

The event ultimately becomes her own runway show, only with one model showing as many looks as she can in just four days.

In less than 48 hours, Bendet has already showcased six looks, wearing dresses in red, teal and blue as well as a leopard-print and surprisingly understated black ensemble.

Von Furstenberg, 71, goes in the exact opposite direction while at the conference with her husband, IAG mogul Barry Diller, choosing to dress down in more rustic wear.

Those simple outfits in muted colors are still of course made of the finest materials, ad Von Furstenberg also uses the conference to pass out her offerings with a pop-up shop at the Sun Valley Lodge.

Thedre she can not only sell some goods but also introduce a revolvoing door of wealthy women to here designs.

It is a practice that is now also being utilized by Tamara Mellon, who is back again this year with billionaie beau and CAA founder Michael Ovitz.

She had a pop up for her eponymous line of shoes and clothing on Wednesday and filmed Instagram stories of some famous women showing off her wears.

Mellon did this while wearing a pair of her $475 Ombre – Capretto sandals in red and the massive engagement ring she received from Ovitz four years prior.

Bendet, Von Furstenberg and Mellon are not just designers either, with all three women also serving as the CEOs of their company.

The women have also all been supporting one another for decades, with von Furstenberg revealing in Wednesday that Hall walked in her very first fashion show back in 1972.

Hall then provided proof by sharing a photo from the event.