On August 28, 1963, Dr. Martin Luther King, Jr. stepped to a podium at the Lincoln Memorial and made a declaration to the nation. After centuries of chattel slavery, Jim Crow laws, voter suppression and other atrocities that deprived Black people of our full humanity, King said, “America has given the Negro people a bad check, a check which has come back marked ‘insufficient funds.’ But we refuse to believe that the bank of justice is bankrupt. We refuse to believe that there are insufficient funds in the great vaults of opportunity of this nation. And so, we’ve come to cash this check…”

On November 4, 2020, amid the backdrop of a global pandemic, Black voters put a downpayment on the future by evicting Donald Trump from the White House.

For a while, the count was too close to call. But as every vote was counted, the picture slowly came into focus: Black voters in battleground states evicted Trump and pushed Biden over the finish line, and Black-led organizations helped make it happen.

In Milwaukee and Philadelphia, Working Families Party volunteers had hundreds of thousands of conversations with Black voters to help them navigate voting in a pandemic. And a product of years of effort by Black organizers flipped Georgia away from the Republicans for the first time since 1992. You may know Stacey Abrams; but there are so many more Black leaders organizing in the deep South for real change: Nse Ufot at New Georgia Project, Wanda Mosley from Black Voters Matter, the Working Families Party’s Britney Whaley and Aimee Castenell, and so many others.

On November 4, 2020, amid the backdrop of a global pandemic, Black voters put a downpayment on the future by evicting Donald Trump from the White House.

These same Black voters and organizers now represent the last hope of Democrats retaking control of the U.S. Senate, when both senate seats head to runoff elections in January. In an especially delicious bit of irony, it was the congressional district of the late Rep. John Lewis whose votes put Georgia out of Trump’s reach.

Now, Black voters are coming to cash that check. We know the richest country in the world has sufficient funds in the bank of justice. Joe Biden and Kamala Harris must be the signers.

There will be a lot of talk in the coming days lauding Black voters for saving America from itself — the work of Black people, and especially Black women who were in the streets knocking on doors, organizing phone banks and making sure our communities got to the polls by any means necessary. They will again call Black folks the backbone of the Democratic Party. 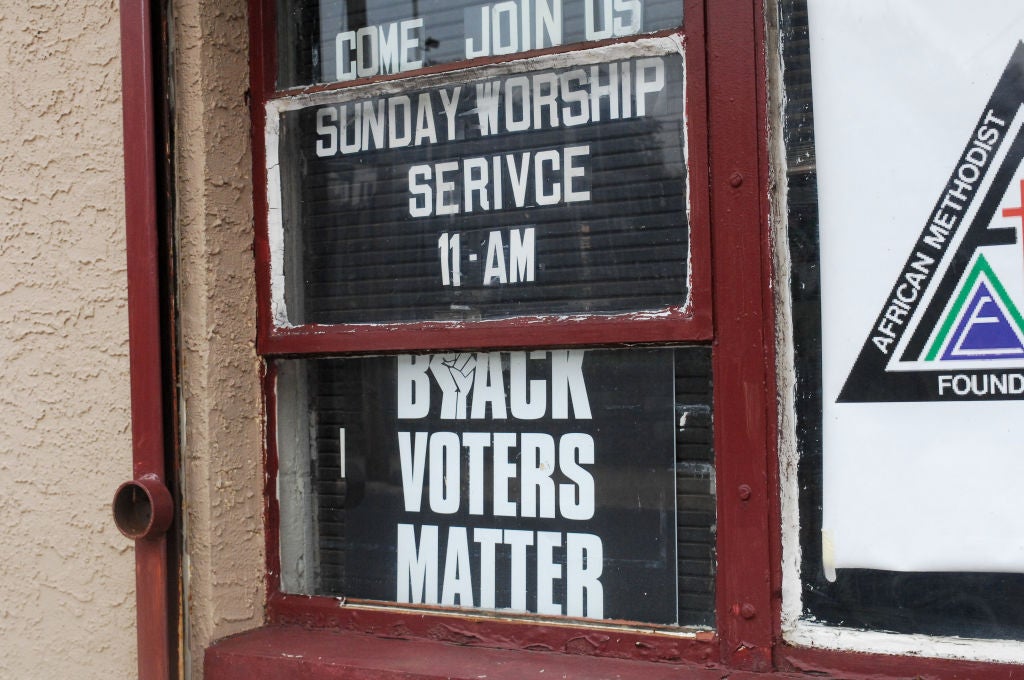 Let me be clear: Congratulations are not enough. The only appropriate thanks is justice. We did not vote to save America from itself. We voted to save us from a second term under Trump’s America. An administration that already targeted Black organizers to public housing to health care and everything in between.

Unfortunately, sweeping this disgraceful administration out of power isn’t the end of anything but the 2020 election cycle. It’s the beginning of new fights to repair the devastation of the last four years.

We will not be passive observers in this process. There will be adversaries on the right who are openly hostile to Black liberation. We will encounter some progressive white people who pretend to be allies but instead find our justice agenda inconvenient, or too loud or coming at the wrong moment. And there may even be Black leaders who prioritize comfort and advancement for themselves over liberation for all Black people.

We must be clear-eyed on our goals. The time for lifting up Black votes while silencing the Black voice is over.

To win, we will be active participants on all fronts. We will be on the protest lines, in community meetings, and training the next generation of Black leaders for office. We will be in the halls of Congress, carrying bills like the Movement For Black Lives’ BREATHE Act — the visionary bill to shift resources from brutal and discriminatory policing and invest in a new vision of public safety. We will be at the table and not on the menu.

We did not vote to save America from itself. We voted to save us from a second term under Trump’s America.

Crises for Black folks are boiling over this year — from the deaths of George Floyd and Breonna Taylor at the hands of police to the deaths of tens of thousands of Black Americans from the coronavirus; from mass unemployment to homes flooded during gulf storms.

Joe Biden has a mandate. A mandate given by Black voters. He shouldn’t forget that.

Maurice Mitchell is national director of the Working Families Party.