Blizzards batter Britain: Snow causes chaos in South West as drivers are warned to only travel if ‘absolutely essential’ and treacherous conditions cause more than 100 crashes in a matter of hours after -11C five-day chill triggered cold alert

The UK is set to be hit with a fresh blast of ice and snow today as temperatures plunge to below freezing across the country, creating travel chaos as drivers are warned to only travel if ‘absolutely essential’.

Treacherous conditions saw more than 100 car crashes in just a few hours as drivers struggled to cope with the sudden change in conditions.

The Met Office has issued yellow for warnings for snow and ice across southern England, parts of the northwest and north Wales, Northern Ireland and large parts of northern Scotland. 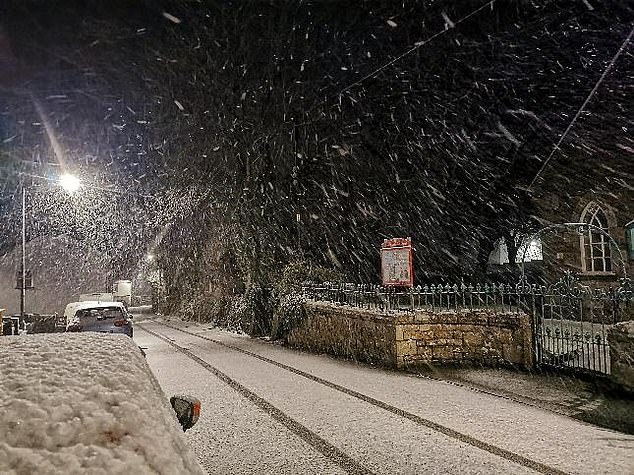 Cornwall has seen a huge dump of snow overnight, causing disruption on the roads there 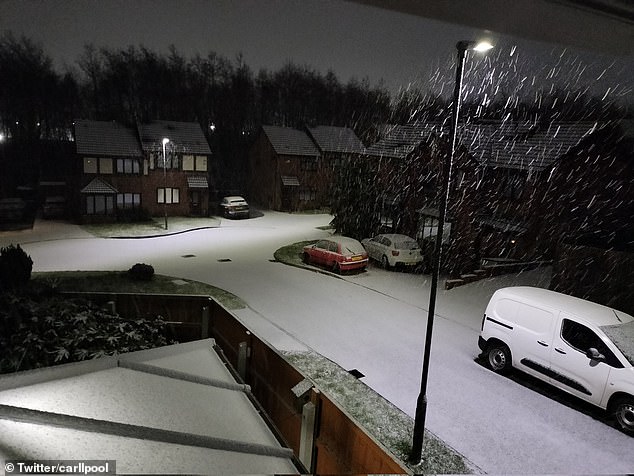 Places including Yorkshire, Northumberland and the north of Scotland have woken up to huge dumps of snow and frost this morning, with the cold weather set to continue throughout this week.

Thousands face travel chaos this morning as snow and ice cover the roads in places.

A section of the A30 in Devon has been blocked up by snow, according to Cornwall and Devon police, affecting tens of thousands of drivers.

Meanwhile in Kent, a road was blocked by truck which lost control on the ice became stuck, stopping traffic in both directions.

Avon and Somerset Police said this morning they are advising the public to only travel if essential after the force received more than 100 reports of road-related incidents in five hours.

A total of 53 road traffic collisions were reported to police between 6pm and 11pm on Monday evening, with the majority being a result of the freezing weather causing dangerous driving conditions.

The force said seven of the incidents were reported to have resulted in injuries but they are not thought to be serious.

A further 67 calls were received for other road-related incidents.

Superintendent Mark Runacres said: ‘We are advising the public to only travel where absolutely essential due to the treacherous driving conditions. 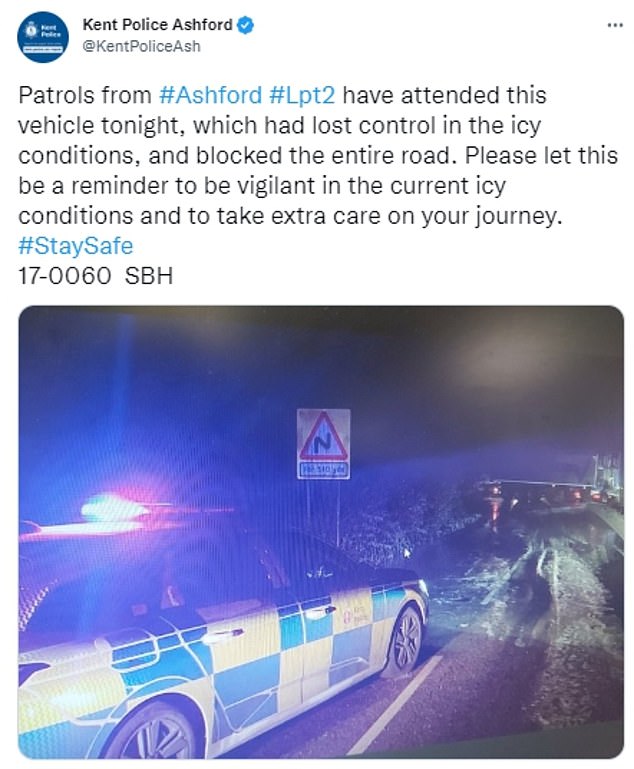 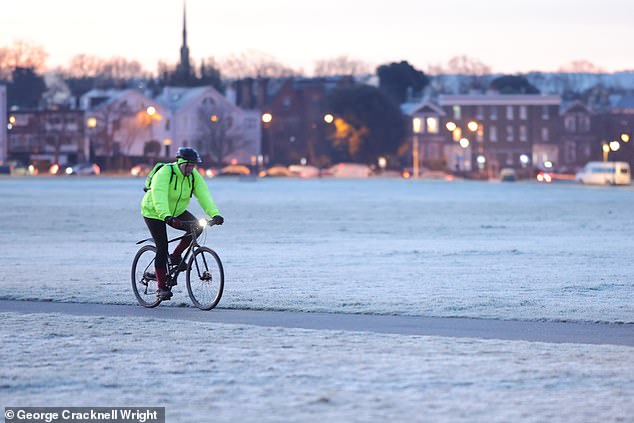 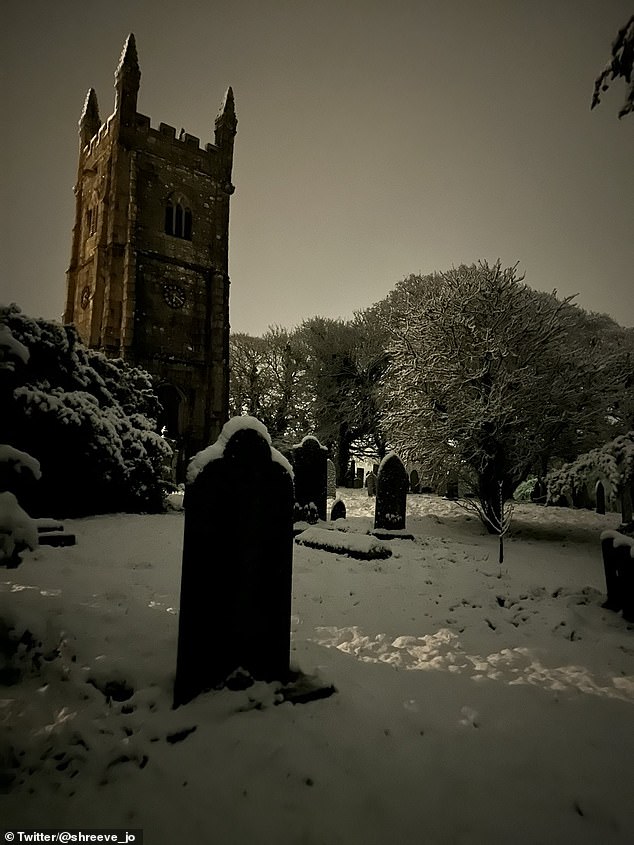 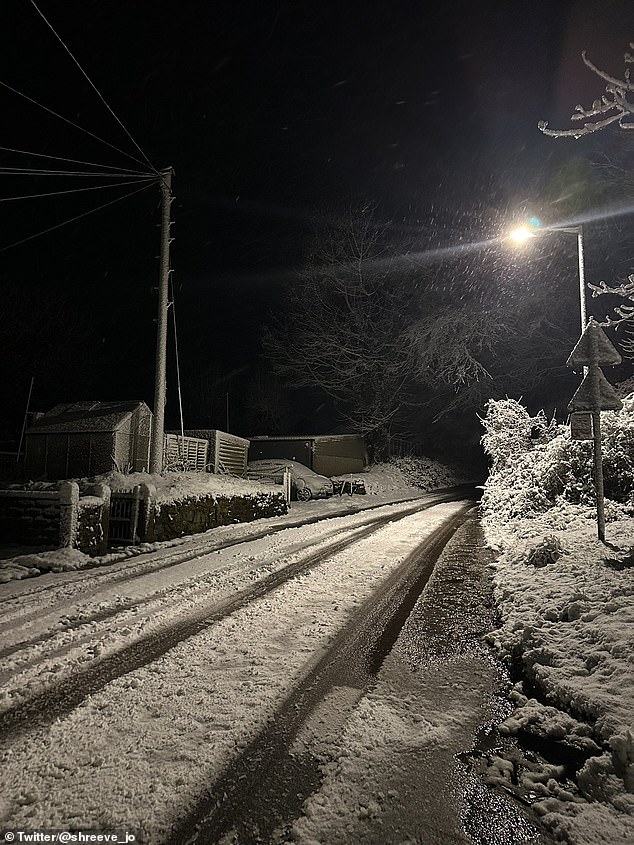 ‘If travel is necessary, we ask the public to take extreme caution and allow additional time to travel.

‘We have seen a significantly higher number of road-related collisions and incidents in the past 12 hours, which has increased the demand on police resources.

‘We are working with local authorities and National Highways to ensure roads are properly gritted ahead of the rush hour traffic to improve driving conditions.’

The Met Office has said all of England will continue to experience cold weather until 9am on Friday.

Forecasters issued a yellow warning for ice across southern England which is in place until 10am on Tuesday morning, with ice likely to cause difficult driving conditions.

A separate yellow warning for snow and ice is also in place in Cornwall and Devon until 10am.

At just after 3am, Devon and Cornwall Police tweeted: “Police are urging drivers to travel with caution as heavy snow showers sweep across the region.

“£A30 Carland Cross near Newquay is currently blocked due to snow, Highways are aware. Please allow extra time for any journey and drive with care.”

Just before 4.30am, Cornwall Fire and Rescue Service tweeted: “We’ve had reports that vehicles are getting stuck in snow on the A39 at Trispen and A391 at Bugle. 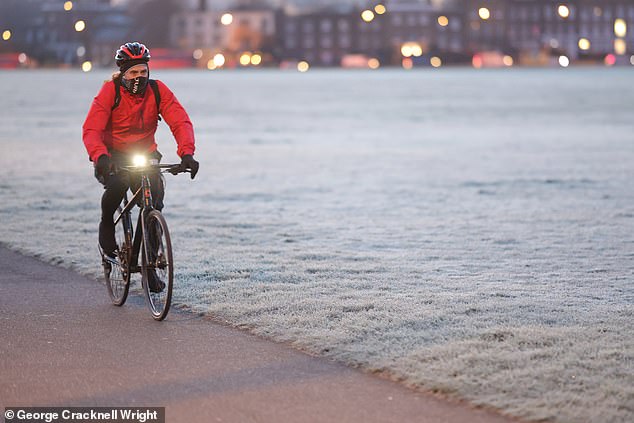 Forecasters issued a yellow warning for ice across southern England which is in place until 10am on Tuesday morning. Pictured: Blackheath Common, south London 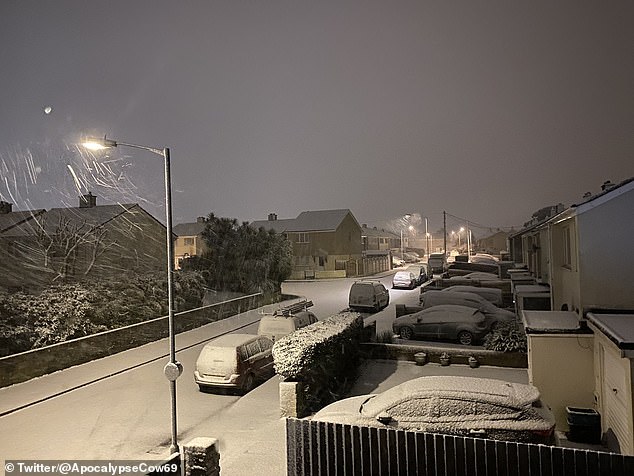 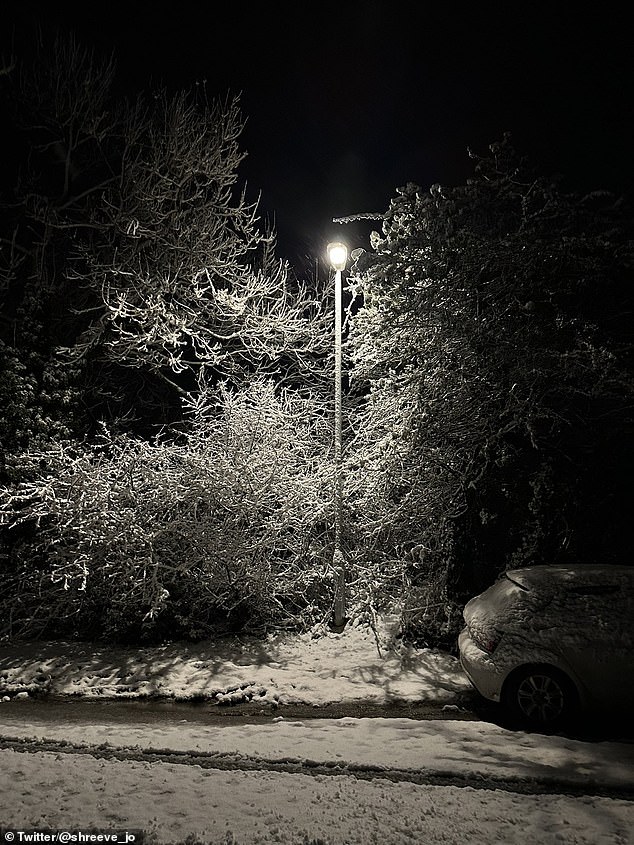 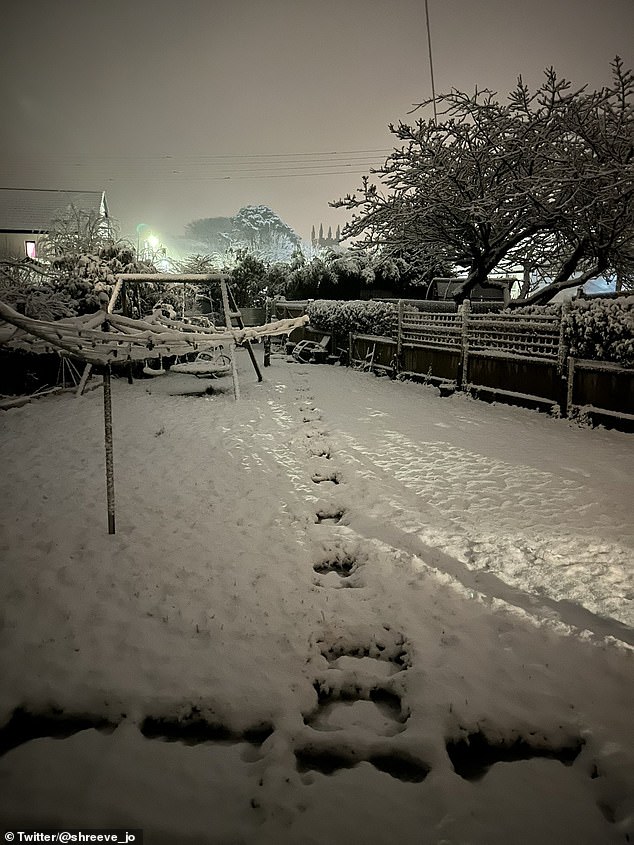 “Please take extra care on the roads as driving conditions are hazardous. If necessary, pull over if it is unsafe to continue.”

The Met Office has also issued a yellow warning for snow and ice across parts of Northern Ireland, north-west England and Wales from 12pm on Monday until 12pm on Tuesday.

Separate yellow warnings for snow and ice are in place in Scotland until 9am on Tuesday.

Mayor of London Sadiq Khan activated the capital’s Severe Weather Emergency Protocol (SWEP) to provide emergency accommodation for rough sleepers on Monday, as temperatures in the city are expected to fall below 0C overnight.

The Met Office has warned that “snow showers and icy stretches may bring some disruption” and could lead to longer journeys for drivers and train passengers.

It said treacherous conditions could also lead to slips and falls on icy surfaces, and urged drivers and cyclists to beware of icy patches on untreated roads.

Parts of the country such as Hampshire were hit with freezing temperatures of -5C last night.

Temperatures could plunge as low as -11C in the next few days as wintry conditions return following weeks of mild weather.

The extreme forecast prompted the UK Health and Security Agency (UKHSA) to urge people to wear several thin layers and consume plenty of hot drinks if they’re feeling the chill in the coming days, and to be mindful of vulnerable family members, friends or neighbours who might need checking on.

Dr Agostinho Sousa, head of extreme events and health protection at UKHSA, said: ‘Cold weather can have a serious impact on health, particularly older people and those with pre-existing health conditions, as it increases the risks of heart attacks, strokes and chest infections.

‘During this period, it is important to check in on family, friends and relatives who may be more vulnerable to the cold weather.

‘If you have a pre-existing medical condition or are over the age of 65, it is important to try and heat your home to at least 18°C if you can.’

An ice warning is in place for south England until 10am, with Cornwall also under a snow warning for the same time period as rain could turn to snow.

There is a warning for snow and ice across north Wales, as well as Merseyside, Cheshire, Greater Manchester and Lancashire, which is in effect until midday. The same warning is in place across Northern Ireland at the same times.

Large parts of Scotland, including the Highlands, Aberdeenshire and the Shetland Islands, are covered by a yellow snow and ice warning until 9am on Wednesday, with the Met Office warning snow could turn heavy at times.

All these areas will see tricky conditions on the roads and on public transport, with people being urged to take care when travelling.

Jason Kelly, the chief meteorologist at the Met Office, said: ‘Cold, icy and sometimes snowy conditions are in the forecast this week, with the UK seeing more of a north-westerly regime, with temperatures well below average for the time of year.

‘Wintry showers are likely at points through the week in the north of England. Warnings have been issued, and ice is likely to be a hazard for much of the week with some tricky travel conditions possible.

‘Maximum temperatures will largely only reach the low single figures, with temperatures below freezing through most nights this week.’