The father who died in a Blue Mountains landslide on Monday has been identified as a British lawyer who lived in Singapore and was visiting Australia with his family on holiday.

Mehraab Nazir, 49, and his nine-year-old son died when they were crushed by falling rocks while hiking the Wentworth Pass track at Wentworth Falls.

His wife, Anastasia, and the couple’s 14-year-old son are in critical condition in hospital, while the family’s eldest daughter – who phoned triple zero to report the tragedy – was physically uninjured and walked out of the area.

It took authorities until Tuesday to recover the bodies from dense bushland.

Mr Nazir was a partner at international law firm Watson Farley & Williams, based in Singapore.

The company’s website described him as specialising in “complex cross-border finance transactions with a particular focus on the transportation and energy sectors”. 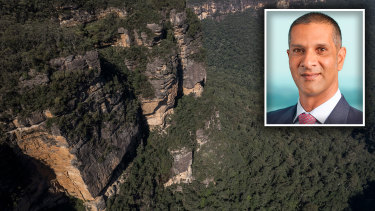 Mehraab Nazir, inset, and his son died in a landslide on the Wentworth Pass track in the Blue Mountains on Monday.Credit:Brook Mitchell, Supplied

Mr Nazir was among a team that won a “restructuring deal of the year” award in 2021 for recapitalising Virgin Atlantic Airways early in the pandemic.

All but two lookouts in the Blue Mountains National Park were closed to the public from 9am on Wednesday, with more wet weather causing concern about further landslides.

Last week, the NSW National Parks and Wildlife Service notified tour groups and residents of scheduled upgrades and repairs involving a helicopter in the Wentworth Pass area, which were set to be performed from April 6 to 8.

The service confirmed that the Wentworth Pass track was inspected in the days before the tragedy as part of a routine track assessment.