‘Seann Walsh wanted to be anywhere else at that moment’: Body language expert says under-fire Strictly star was ‘on the defensive’ in ‘prudish’ BBC interview alongside Katya Jones

Strictly star Seann Walsh was ‘on the defensive’ and looked like he ‘wanted to be anywhere else’ during tonight’s BBC interview, a body language expert has said.

Judi James told MailOnline that Walsh and Katya Jones – who were seen sharing a passionate kiss in a moment which led Seann’s girlfriend to dump him – looked ‘prudish’ during their appearance on It Takes Two.

Walsh turned on his ex-girlfriend Rebecca Humphries and claimed he has been wrongly portrayed after she ended their relationship on Twitter.

However Katya Jones said she and her husband Neil were ‘absolutely fine’, while apologising to ‘everyone it hurt and involved’. 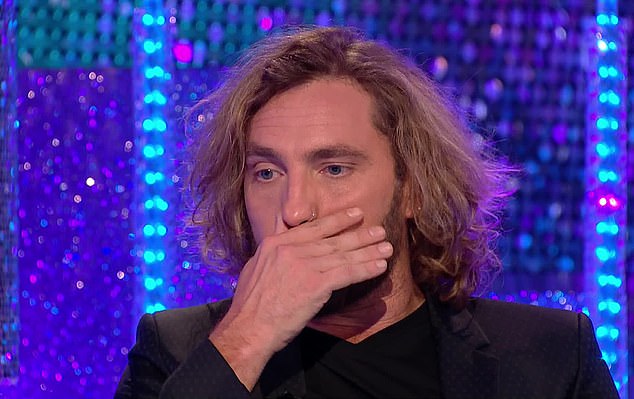 Seann Walsh’s nose-rubs ‘suggested a subliminal desire to be anywhere else at that moment’ during his BBC interview tonight, a body language expert has said

The body language expert, calling it a ‘toe-curling interview’, said there was a ‘prudish air’ about the couple’s posture and behaviour during the TV appearance.

She said: ‘Katya swapped her normally tactile and fun-loving behaviour with Sean for a very regal-looking public act of rejection as she crossed her legs away from him and performed a shudder of what looked like theatrical pain as the pair launched themselves into their apologies.

‘When you start an apology with the word “obviously” it detracts from the sense of any guilt and automatically sounds as though you’re on the defensive.

‘While Katya looked as though she wanted to appear on the brink of tears Seann’s nose-rubs suggested a subliminal desire to be anywhere else at that moment.

‘Although when the subject of Rebecca came up he seemed to adopt an entirely different body language state, shifting his body and tilting his head back in a look that implied arrogance more than submission.

‘Suddenly he used eye contact with Zoe, accompanied by a small tongue-poke, which can be a signal of rejection. 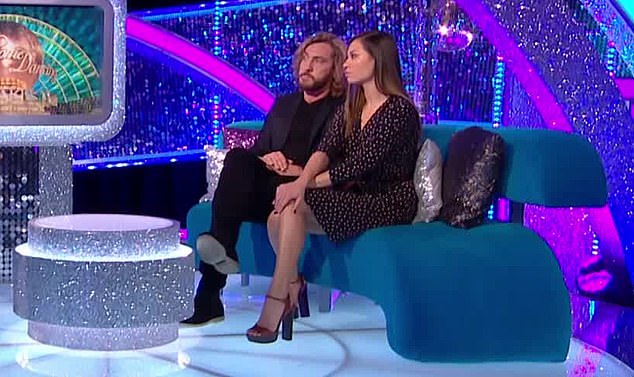 Katya Jones crossed her legs away from her Strictly partner Seann Walsh, in what body language expert Judi James said was a ‘very regal-looking public act of rejection’

‘This mood-change suggested the line about his relationship “not being perfect” was the key message of his interview and he ended this sentiment with an expression of what looked like challenge, suggesting it will be business as usual on the dancefloor for this pair this weekend.’

In the interview Walsh said he was ‘not the person I’m being portrayed as’ by his ex-girlfriend who ended their relationship in a lengthy statement online saying he had called her ‘psycho’ when she suspected him of cheating.

In a lengthy statement shared across social media on Monday evening Humphries confirmed she had ended their five-year relationship.

She said: ‘Those pictures were taken on October 3rd. It was my birthday. I was alone at home when Sean texted at 10pm saying the two of them were going for one innocent drink. 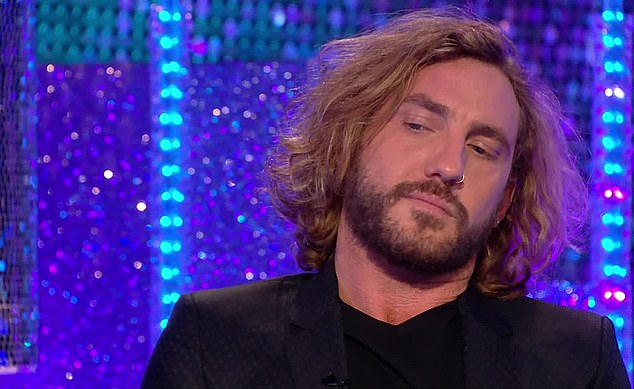 When the subject of his ex-girlfriend Rebecca Humphries came up Seann Walsh started ’tilting his head back in a look that implied arrogance more than submission’, the expert said

‘We spoke and I told him, not for the first time, that his actions over the past three weeks had led me to believe something inappropriate was going on.

‘He aggressively, and repeatedly, called me a psycho/nuts/mental. As he has done countless times throughout our relationship when I’ve questioned his inappropriate, hurtful behaviour.

‘But – this whole business has served to remind me that I am a strong, capable person who is now free; and no victim.

‘I have a voice and will use it by saying this to any woman out there who deep down feels worthless and trapped with a man they love: Believe in yourself and your instincts.

‘It’s more than lying. It’s controlling. Tell some very close friends who, if they’re anything like my wonderful network, will swoop in and take care of the logistics and of you.’