LA PAZ (Reuters) – Bolivian President Evo Morales on Saturday vowed to hold a run-off election if fraud is found in a vote count that gave him an outright win, but warned his rural base would siege cities if they keep protesting his disputed re-election to a fourth term. 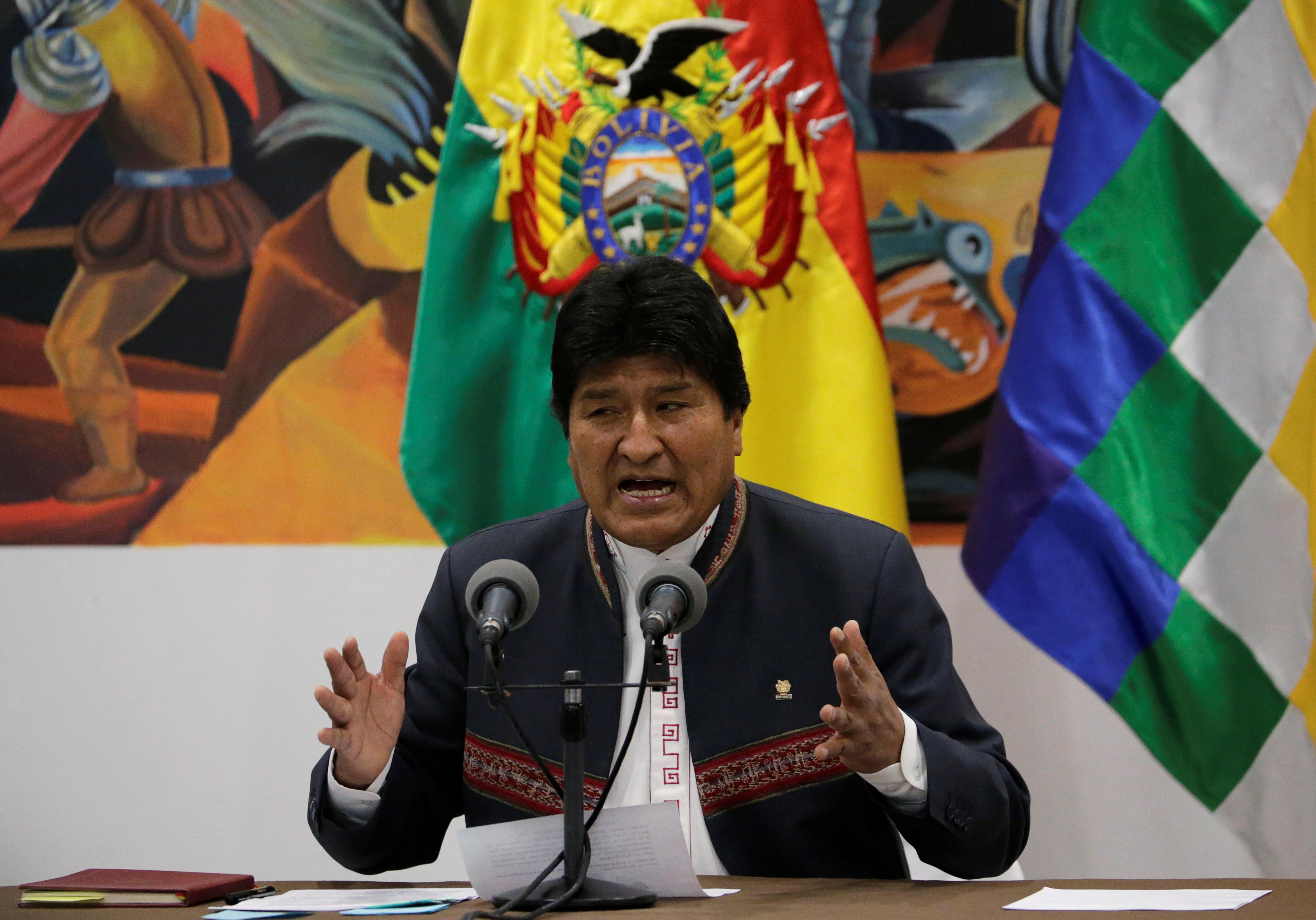 Morales has faced nearly a week of street demonstrations in major cities and growing international pressure to call a run-off vote with his closest rival Carlos Mesa in order to restore credibility to an election dogged by allegations of vote-rigging lobbed by the opposition.

Morales, Latin America’s longest-serving president, is the lone survivor of a group of fiery leftist leaders who took office in the previous decade, most of whom have since been replaced by right-leaning governments.

He has overseen a rare period of economic and political stability in South America’s poorest country. But doubts raised by official observers about the legitimacy of his first-round victory threaten to dog his 2020-2025 term.

In a speech in the region of Cochabamba, a bastion of rural support, Morales invited countries in the region that have called for him to hold a run-off vote – the United States, Brazil, Argentina, Colombia – to take part in an audit of the official tally.

But he later said at a different event in Cochabamba that a key umbrella group of his social bases, Conalcam, plans to send his supporters to choke off cities that have staged strikes against his re-election.

“There’s a plan,” Morales said after meeting with the local Conalcam committee. “If they want strikes, no problem. We’ll join them by sieging cities. Let’s see if they can take it,” Morales told cheering crowds of supporters.

The comments indicated that Morales, widely known as just “Evo” in Bolivia, would adopt a tougher approach to criticism at home than abroad.

“Evo’s in an existential crisis politically,” Bolivian political analyst Marcelo Arequipa said, adding that his political party MAS was split over how to proceed. “He doesn’t seem to have a strategy.”

Mesa, a former president, said his supporters were forming a commission to pressure the international community to not recognize the election’s results.

Brazil, landlocked Bolivia’s biggest trade partner, has already said it would not recognize Morales’ win until the regional group Organization of American States (OAS) finishes an audit of the vote count that has not yet started.

The European Union and Washington-based OAS, both of whom sent observer missions to Bolivia, have also pushed Morales to convene a second-round vote to ease recent unrest. Venezuela, Cuba and Mexico have sent Morales congratulations on his win.

The country’s embattled electoral board, the Supreme Electoral Tribunal (TSE) has denied any foul play and invited the OAS to audit the official tally. But it has not said whether it would accept the OAS’ condition for the audit’s conclusions to be legally-binding.

Peru, governed by a centrist president, said it would take part in the audit at Bolivia’s request and called for the process to be carried out respecting Bolivian laws.

The OAS in La Paz said on Saturday that the audit would start around the middle of next week.

The vote count by the TSE at 100% on Friday showed Morales had 47.08% of votes versus Mesa’s 36.51% in a crowded race of nine candidates. That gave him the 10-point lead needed to face Mesa in a Dec. 15 second-round vote, when the opposition would likely rally behind Mesa to defeat Morales.

The TSE sparked an uproar after the election on Sunday when it halted publication of a quick vote count that showed Morales headed to a second-round with Mesa. When the quick count resumed after an outcry, it confirmed Morales’ prediction on Sunday that he would pull off an outright win with the help of rural votes.

Mesa’s campaign has also said that it has found 100,000 votes that should have been annulled due to irregularities but instead swung in Morales’ favor. 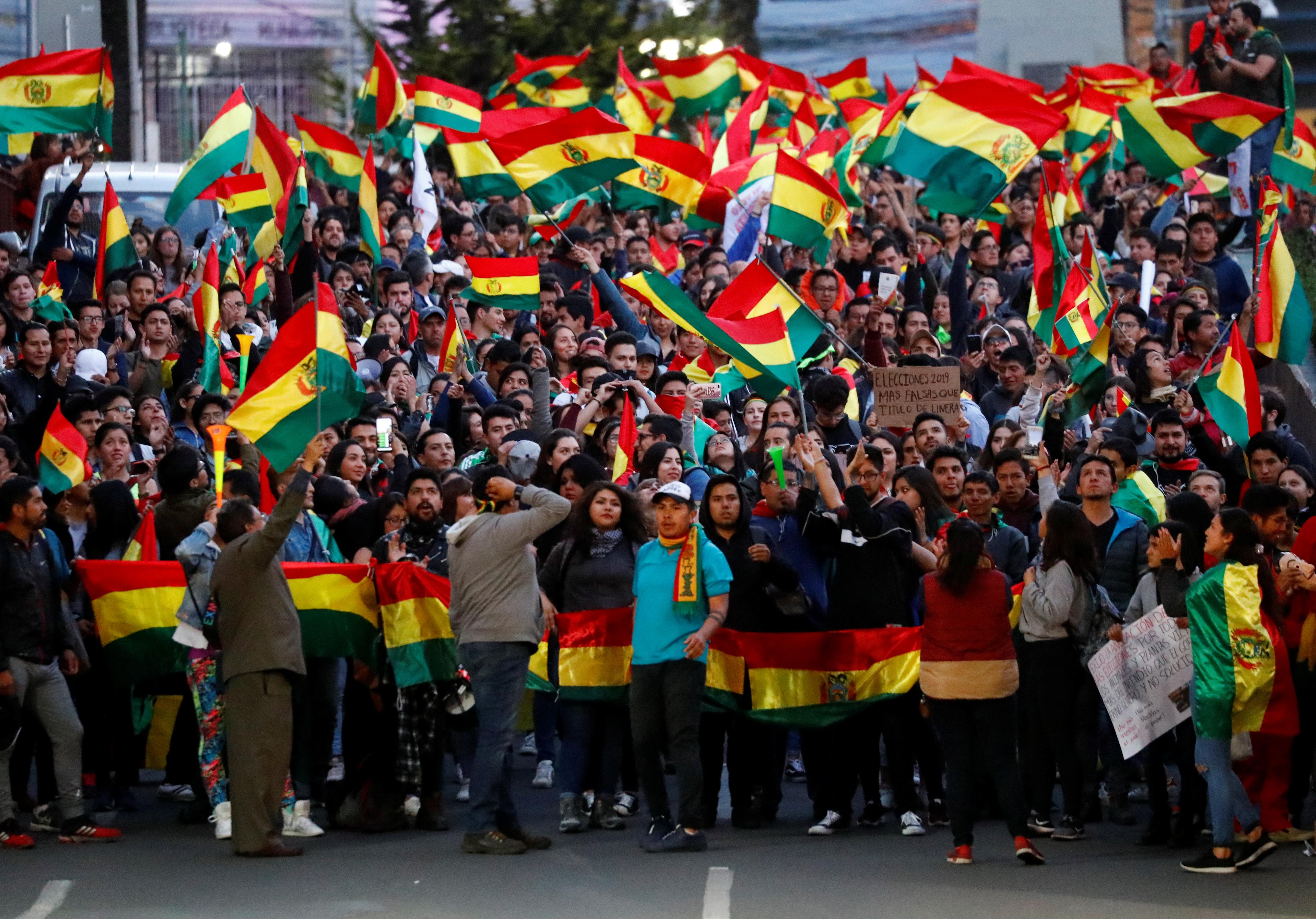 As night fell on La Paz, Bolivians banged pots and pans from their windows in a traditional form of protest.

“This is a scandalous fraud never seen before. That’s why the people are reacting,” retiree Fredy Salinas, 67, said as he bought vegetables in a market in La Paz.

Morales said his detractors were “envious” of his achievements and accused the opposition, without providing evidence, of trying to stir up unrest to try to unseat him illegally. “With lies and tricks they’re trying to instigate hatred and racism,” he said.