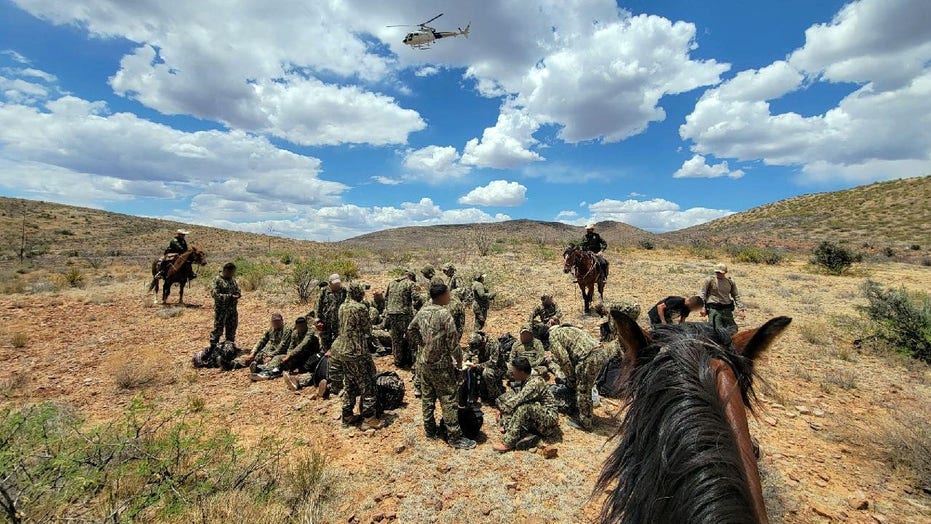 He shared an image showing their outfits as officers surrounded the group with a helicopter hovering overhead.

It’s not the first time migrants have used camouflage clothing in a bid to escape detection, and crossings in general are up as well.

Last week, Border Patrol agents in Texas found 20 migrants crammed into a pickup truck and cargo trailer during a stop southeast of El Paso. On Monday, they found 23 crammed into an open-topped Panga-style vessel off the coast of San Diego.

And Modlin’s latest announcement came three days after he said 124 migrants surrendered to agents near San Miguel, Ariz. Out of that group, 105 of them were unaccompanied minors.

In the month of April, Border Patrol ran into more than 178,000 border crossers – over 13,000 of them unaccompanied minors.

Tucson Sector officials warned in a news briefing last week that summertime crossings in the desert area would be potentially deadly.

“The desert is vast and it’s treacherous, when you cross illegally you put your life in incredible peril,” Sabri Dikman, acting deputy chief patrol agent, said at the time. “I’m telling you this not only as a Border Patrol agent, but as one who spent his entire 23-year career in Arizona. I speak from experience.”

The Tucson Sector, which covers 262 miles of border between the Arizona-New Mexico state line and the edge of Yuma County, sees fewer migrant crossings than Texas – but more deaths, authorities said.