Boris Johnson today hailed a ‘big step to vaccinating the world’ as he confirmed the G7 has agreed to donate a billion Covid vaccine doses to poorer countries.

The commitment includes 100million doses from the UK and 500million from the US, with Mr Johnson insisting they are going ‘flat out’ to protect populations.

However, campaigners have warned that the numbers are far from enough to prevent the virus from running riot among some of the globe’s most vulnerable populations – and potentially sparking new problems in richer countries.

Meanwhile, Sir David Attenborough today pleaded with G7 leaders to show the ‘will’ to save humanity from climate change.

The celebrated television naturalist said the scientific response to the Covid-19 pandemic demonstrated what was possible when there was a ‘clear and urgent’ goal.

But in a video speech to the summit in Cornwall he warned that the fight against climate change was now as much a ‘political and communications’ challenge as a scientific one. 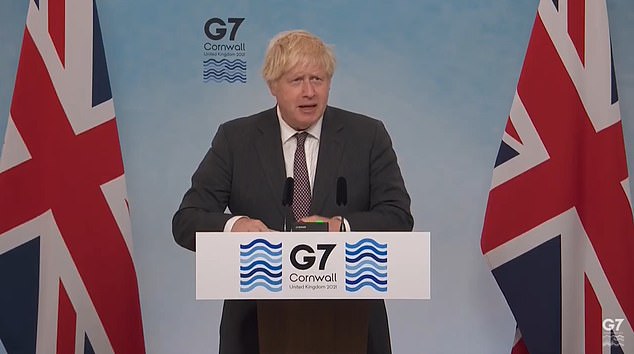 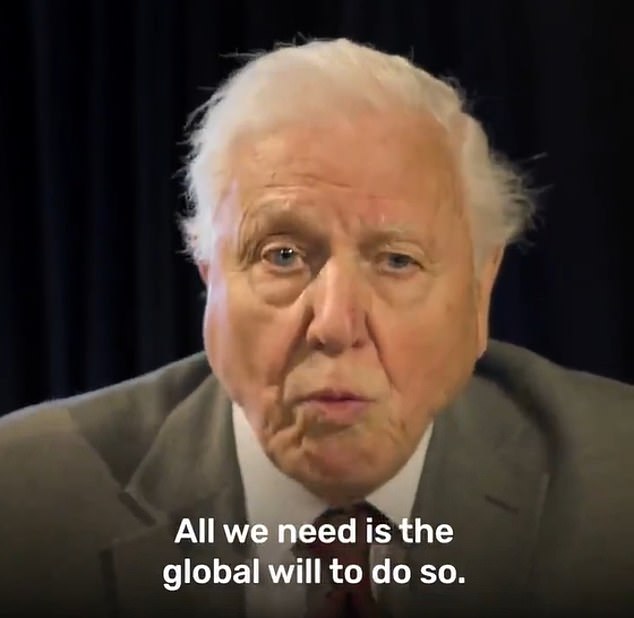 Sir David told the leaders gathered in Carbis Bay: ‘The scientific collaboration on Covid treatment and vaccines showed just how much we can achieve together when the goal is clear and urgent.

‘We know in detail what is happening to our planet. And we know all of the things we need to do during this decade.

‘Tackling climate change is now as much a political and communications challenge as it is a scientific or technological one.

‘We have the skills to address it in time. All we need is the global will to do so.’

The leaders were setting out plans to reverse biodiversity loss and to fund infrastructure development around the world.

Mixed in with the environmental intentions of the G7 is an attempt to reassert the values of the world’s leading democracies.

The ‘build back better for the world’ plan will bring together G7 countries to develop an offer for high-quality financing for vital infrastructure, from railways in Africa to wind farms in Asia.

The move is part of an attempt to counter Beijing’s ‘belt and road’ initiative which has spread Chinese influence around the globe.

The new approach is intended to give developing countries access to more, better and faster finance, while accelerating the global shift to renewable energy and sustainable technology.

G7 nations are expected to commit to almost halving their emissions by 2030 relative to 2010, a commitment already exceeded by the UK which has promised a 58 per cent cut.

The countries will set out the action they will take to slash carbon emissions, including measures like ending all unabated coal use as soon as possible, halting almost all direct government support for the fossil fuel energy sector overseas and phasing out petrol and diesel cars.

The G7 will also endorse a nature compact, aimed at halting and reversing biodiversity loss by 2030 – including supporting the global target to conserve or protect at least 30 per cent of land and oceans by the end of the decade.

The fund will run for at least five years. 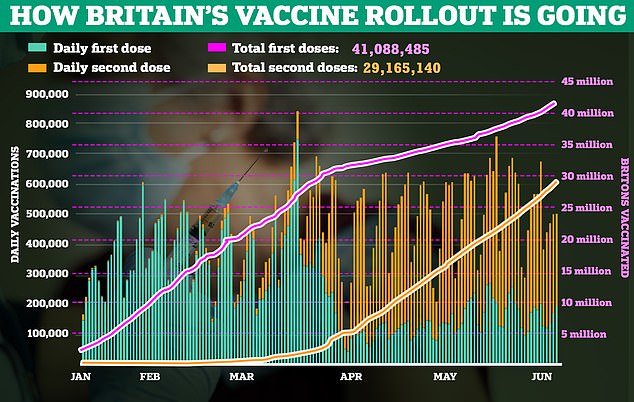 Under the vaccine gifting plan, the UK will start donating vaccines within weeks, providing five million doses to countries in need by the end of September.

Around 25million more jabs will be distributed by the end of the year and the remainder will follow in 2022. The cost cannot be precisely calculated as it will depend what vaccines are gifted – but it could top £1billion.

Mr Johnson is urging other leaders at the G7 summit in Cornwall to follow his example. Joe Biden has already promised to donate half a billion Pfizer vaccines for 92 low and lower-middle income countries and the African Union.

But vaccines minister Nadhim Zahawi confirmed this morning that the British public are still being prioritised.

Eighty per cent of the 100million doses will go to the Covax initiative, which is distributing vaccines to poorer nations. The remainder will be shared bilaterally with countries in need.

The donation will count as extra spending on top of the £10billion committed to the new foreign aid target of 0.5 per cent of gross domestic product.