So long, and thanks for all the fishing quotas: Boris Johnson is accused of betraying Britain’s fishermen after compromise with EU in row over trawling

Fishing chiefs yesterday accused Boris Johnson of betraying their industry in the interests of preserving free trade with the EU.

Under the post-Brexit agreement struck on Christmas Eve the EU will give up only 25 per cent of the value of fish caught in UK waters – with a five-and-a-half-year transition period.

The UK had initially insisted on reclaiming 80 per cent over three years.

Despite admitting he had given ground, the Prime Minister claimed the agreement was a success. 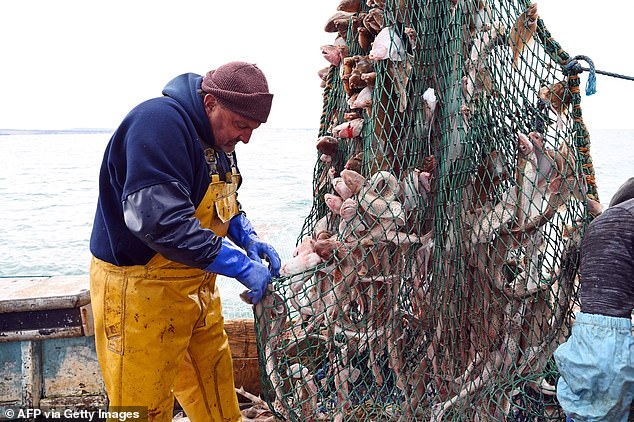 Sporting a tie with a fish motif, he told reporters: ‘The EU began with I think wanting a transition period of 14 years, we wanted three years, we’ve ended up at five years.

‘That was a reasonable transition period and I can assure great fish fanatics in this country that we will as a result of this deal be able to catch and eat quite prodigious quantities of extra fish.

‘For the first time since 1973 we will be an independent coastal state with full control of our waters with the UK’s share of fish in our waters rising substantially from roughly half today to closer to two thirds in five-and-a-half years’ time, after which there is no theoretical limits beyond those placed by science or conservation on the quantity of our own fish that we can fish in our waters.’

But fishermen have said there will be ‘frustration and anger’ at the outcome of the negotiations. 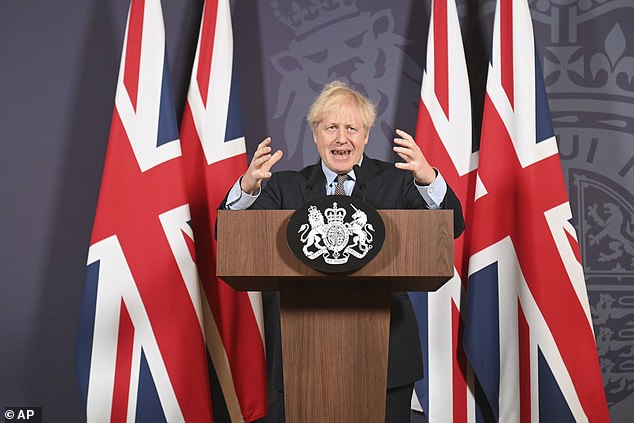 Despite admitting he had given ground, the Prime Minister claimed the agreement was a success

Barrie Deas, chief executive of the National Federation of Fishermen’s Organisations, said: ‘In the end it was clear that Boris Johnson wanted an overall trade deal and was willing to sacrifice fishing.

‘The broad feeling is that the UK has made significant concessions on fish in order to secure a trade deal.

‘The industry will be extremely disappointed. We have secured increases in quota from the EU but they don’t come anywhere close to what our entitlement is in international law.

‘There will be frustration and anger across the industry.’

‘They are trying to make a silk purse out of a sow’s ear,’ he said. ‘I also suspect the EU will end up being happier than the UK will.’

Elspeth Macdonald, chief executive of the Scottish Fishermen’s Federation, said that the deal did not appear to deliver on the industry’s aspirations.

She said: ‘The principles that the Government said it supported – control over access, quota shares based on zonal attachment, annual negotiations – do not appear to be central to the agreement. After all the promises given to the industry, that is hugely disappointing.’

French fishing bosses, however, have welcomed the deal. They were briefed on the agreement yesterday by Europe minister Clement Beaune and maritime minister Annick Girardin.

They had feared No Deal because they would have been locked out of British waters. Mr Beaune, who speaks for President Emmanuel Macron on Brexit, said Paris was planning a rescue package to make up for the cuts in quotas.

But he warned that Brussels would still use access to its single market ‘as a means of pressure’ over the UK once the fish transition period ends in 2026.

Olivier Lepretre, chairman of the regional fisheries committee in northern France, said his industry was satisfied with the agreement because some level of access was maintained in the medium term.

‘It’s better to lose a finger than see your whole arm cut off,’ he told the Mail.

He added that French trawlers were relieved to avoid No Deal ‘even if now it means that they can fish a bit less than before’.

One EU diplomat who has worked on Brexit for the past four years said that once the text was published Tory MPs would see how much Britain gave away to seal a deal.

The diplomat, who is from a coastal state that depends on access to British waters, said: ‘The UK will spin it their way but reality will show that they gave in a lot in the end. But who cares if we deliver an orderly exit.’