BORIS Johnson today dropped a Brexit bombshell by asking the Queen to shut down Parliament to stop Jeremy Corbyn's plans to block No Deal.

The bold move to block MPs from sitting in Parliament for around five weeks over conference season will give rebels less time to launch new plots to stop us leaving on October 31. 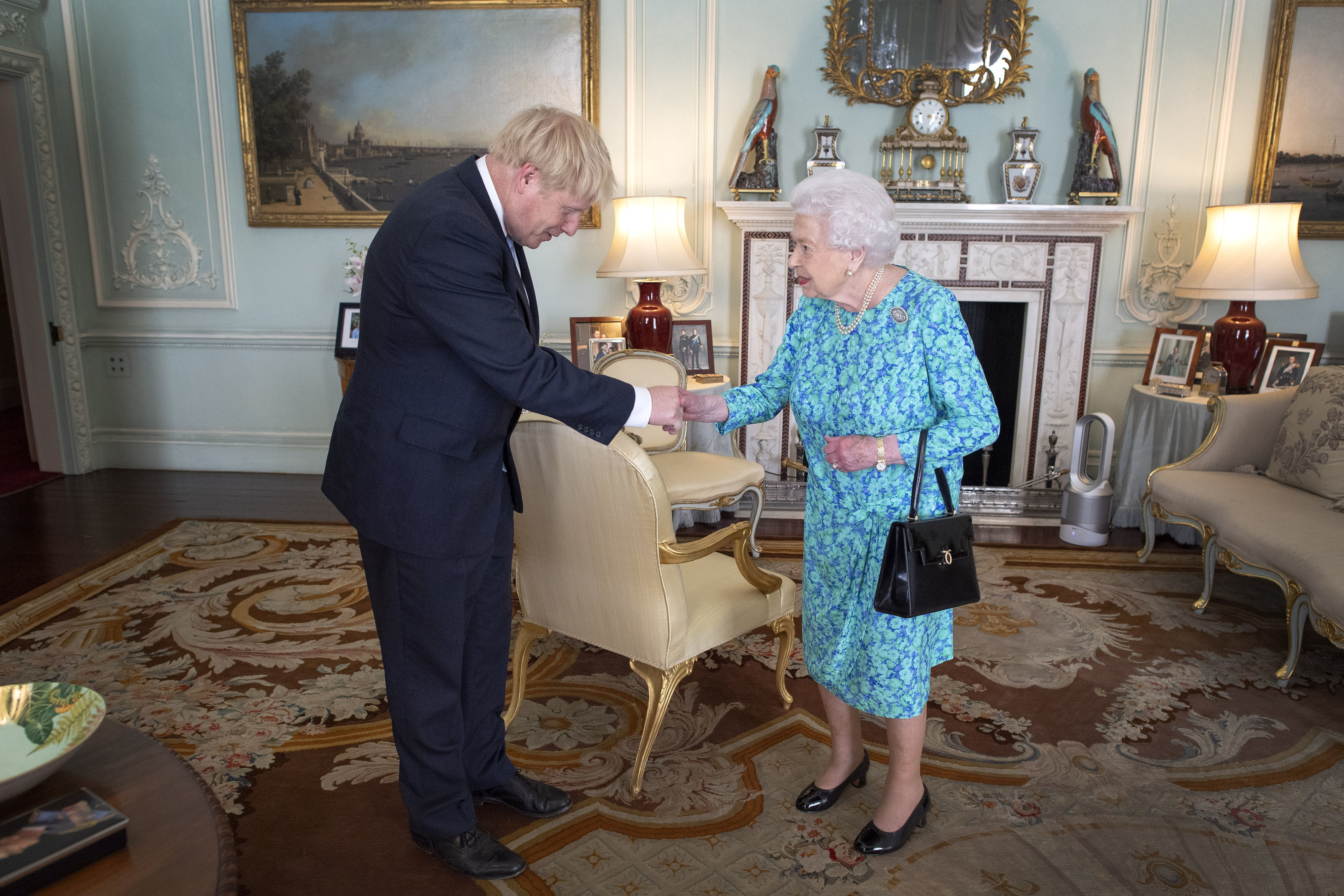 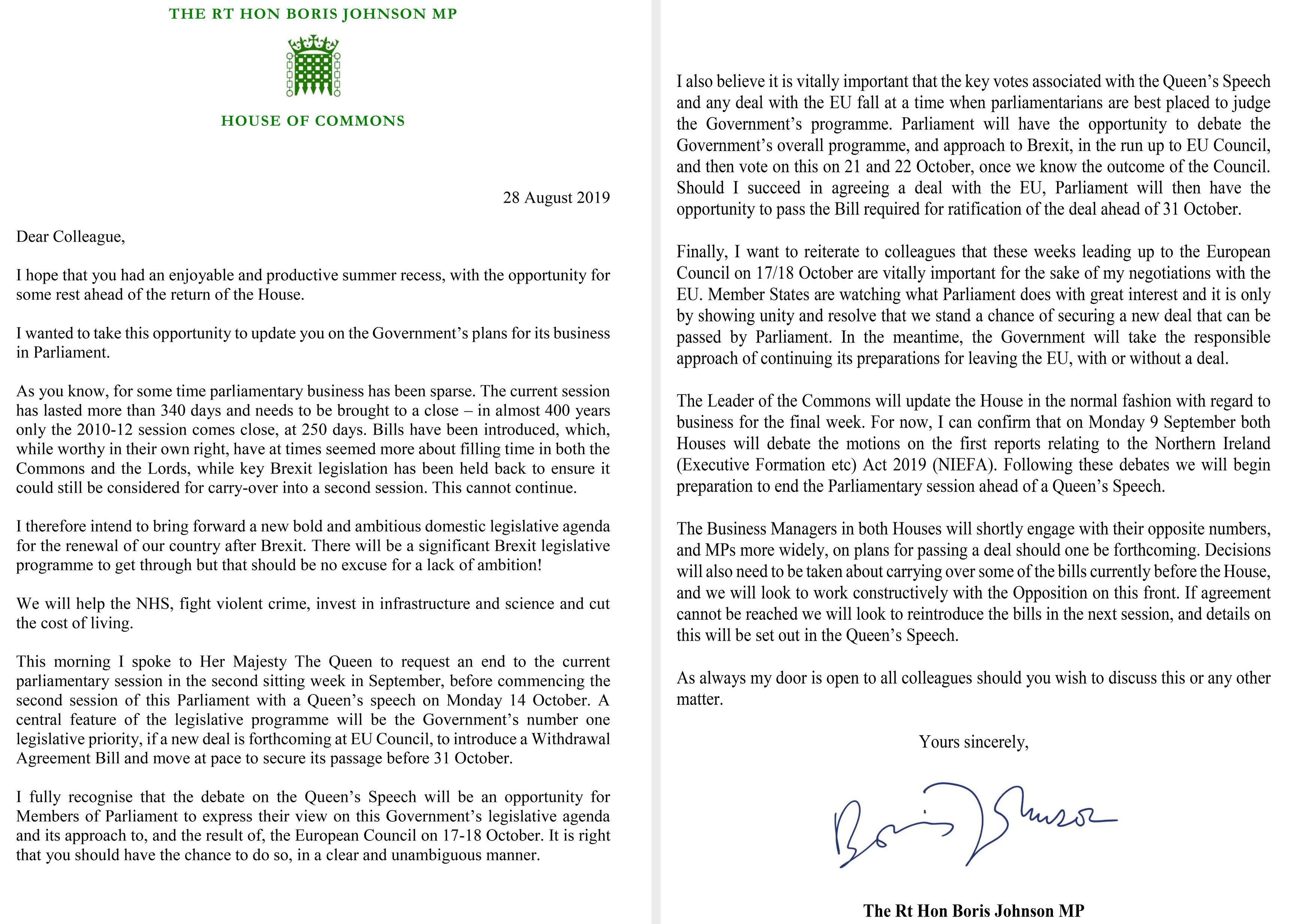 MPs would come back for a Queen's Speech on October 14 under the plans, just two weeks before we're due to leave the EU.

That would leave just days for a possible vote of no confidence in Boris, or for rebel MPs to pass a law to push back the Brexit date.

On a chaotic day in Westminster today:

It would be completely unprecedented for the Queen to ignore the wishes of a sitting PM and refuse to grant his request.

Boris said today: "We are not going to wait for October 31 before getting on with our plans to take the country forward.

September 12 – Conference recess, where each party holds a mass rally for members, is held for three weeks

Rebel MPs had discussed plans yesterday to try and scrap the conference recess altogether to give them as much time to wreck Brexit as possible.

A senior official said this morning that rebels shouldn't call a vote of no confidence – because Downing Street will simply hold an election after Brexit day.

They said: "If MPs pass a no confidence vote next week then we won’t resign.

"We won’t recommend another government, we’ll dissolve parliament, call an election between November 1-5 and there’ll be zero chance of Grieve legislation."

The “Grieve legislation” refers to the plan by the former Attorney General to force a Commons vote on an amendment to legislation on Northern Ireland.

This is designed to stop a future PM ‘proroguing’ the House.

Under Mr Grieve’s plans, the Prime Minister would be forced to report back to the Commons every two weeks from September to provide an update on efforts to resolve the deadlock on power sharing in Northern Ireland.

If a future PM does find a way to suspend Parliament, he would have to recall it to provide the update.

Boris also today delivered a threat to rebel MPs – that if they try and derail his Brexit negotiations it will be their fault if we leave without a deal.

He wrote: "These weeks leading up to the European Council on 17/18 October are vitally important for the sake of my negotiations with the EU.

"Member states are watching what Parliament does with great interest, and it is only by showing unity and resolve that we stand a chance of securing a new deal that can be passed by Parliament."

MPs are set to come back to Parliament after their summer break next Tuesday, September 3.

But they are then expected to go off on the traditional three-week conference recess on around September 12, for the final few weeks of the month.Every year the PM shuts down parliament for several weeks to allow time for conferences – but not usually for such a long period of time.

MPs will be told to stay at home for at least an extra week.

Remainers reacted with fury to the news today.

Pro-EU Speaker John Bercow, who once proudly displayed a "b***ks to Brexit" car sticker despite claiming to be impartial, said it was "blindingly obvious that the purpose of prorogation now would be to stop Parliament debating Brexit and performing its duty."

And he added: "Shutting down Parliament would be an offence under the democratic process and the rights of Parliamentarians as the people's elected representatives."

Ex-Chancellor Philip Hammond, who has been repeatedly slammed for refusing to prepare properly for a No Deal Brexit, said today it would be a "constitutional outrage if Parliament were prevented from holding the Government to account at a time of national crisis".

Dominic Grieve said the suspension of Parliament was an "outrageous" act and he would vote no confidence in his own administration if a vote was called.

He told the BBC that he will work with other MPs to "take steps to ensure that the prorogation doesn't happen, or move very quickly to a vote of no confidence in the Government."

"If it is impossible to prevent prorogation it is going to be difficult for people like myself to keep confidence in the government," he warned.

Labour leader Jeremy Corbyn said he was "appalled at the recklessness of Johnson's government" and called it a "threat to our democracy".

But he refused to reveal whether he had a plan for what to do next.

Lib Dem Tom Brake said: "His declaration of war will be met with an iron fist.

SNP boss Nicola Sturgeon said today: "Unless MPs come together to stop him next week, today will go down in history as a dark one indeed for UK democracy."

But DUP Leader Arlene Foster, whose party currently props up Boris’ Commons majority, was pleased by the PM’s announcement.

She said: “We welcome the decision to hold a Queen’s Speech marking the start of a new session of Parliament on 14 October where the Government will set out its new domestic legislative agenda.

“In the meantime, we will continue our work with the Prime Minister to strengthen the Union, deliver a sensible deal as we exit the EU and restore devolution in Northern Ireland.

“The new session of Parliament will set a new domestic legislative programme which can deal with the matters most important to people such as their safety, their schools and their hospitals.”

Boris Johnson has promised to take Britain out of the EU with or without a deal by the end of October.

But rebels MPs have vowed to stop him quitting the bloc with a deal if they can.

Today's move caused the pound to drop against the dollar as markets jittered amongst the uncertainty.

What happens next with plots to stop a No Deal Brexit?

NOW Boris has announced his plans to stop MPs sitting in Parliament for up to five weeks, it limits Remainers' options to stop a No Deal. What will they try and do next?

No confidence vote next week: The move will put pressure on Jeremy Corbyn to launch a vote of confidence next week when MPs come back to Westminster on Tuesday.

That plan was put on the back burner yesterday because MPs refused to back Mr Corbyn's plan to become a caretaker PM and storm into No10.

If MPs waited until October to force a vote of no confidence, they may not have time to do so, or it could see Brexit happen during the 14-day period after the Government lose a vote of confidence.

This wouldn't, then, stop a No Deal Brexit from happening.

A confidence vote next week may now have a better chance of success if MPs think this is their last chance.

But Government sources said if they lost such a vote they would stay in power until after Brexit day anyway.

Try and force through new law in just days: MPs will have a few days when Parliament gets back next week, and a few the week after too.

That could be enough time to push through a law using an emergency debate.

Last time rebel MPs forced a new law through in just a few days – giving them hope they can do it.

Take the battle to the courts: A court challenge to shutting down Parliament is due to be heard in Scotland on September 6.

MPs could try and focus their efforts into getting a court to deem the move unlawful, though this is unlikely to succeed.

Dominic Grieve said that he would look into efforts to stop shutting down Parliament after today's news.

SNP politicians and others are looking at trying to get a court ruling in the Court of Session to block prorogation too. 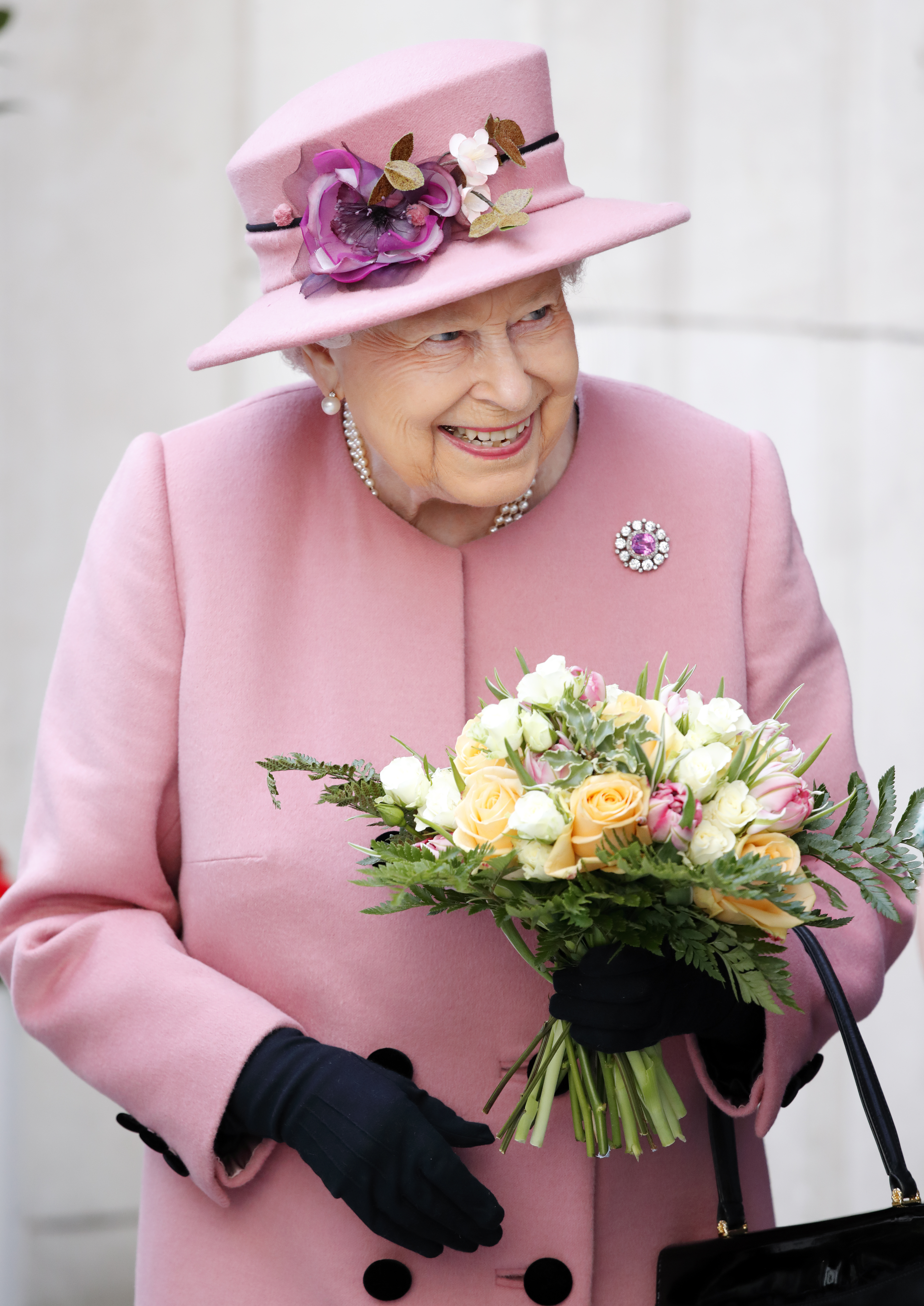 Meanwhile, Britain's EU sherpa David Frost is in Brussels today talking to the EU about whether a deal can be done.

Boris said at the weekend that it was now "touch and go" whether Britain will leave the EU with an agreement or not.

But he was given a 30-day lifeline by Macron and Merkel to try and get a solution for the Irish border instead – which could stop MPs from voting down the Government in the days to come.

Brexit Party leader Nigel Farage urged him to go full on for a No Deal Brexit.

Meanwhile, the odds on a November election have been slashed yet again.

Ladbrokes made it 11/8 that it happens now. 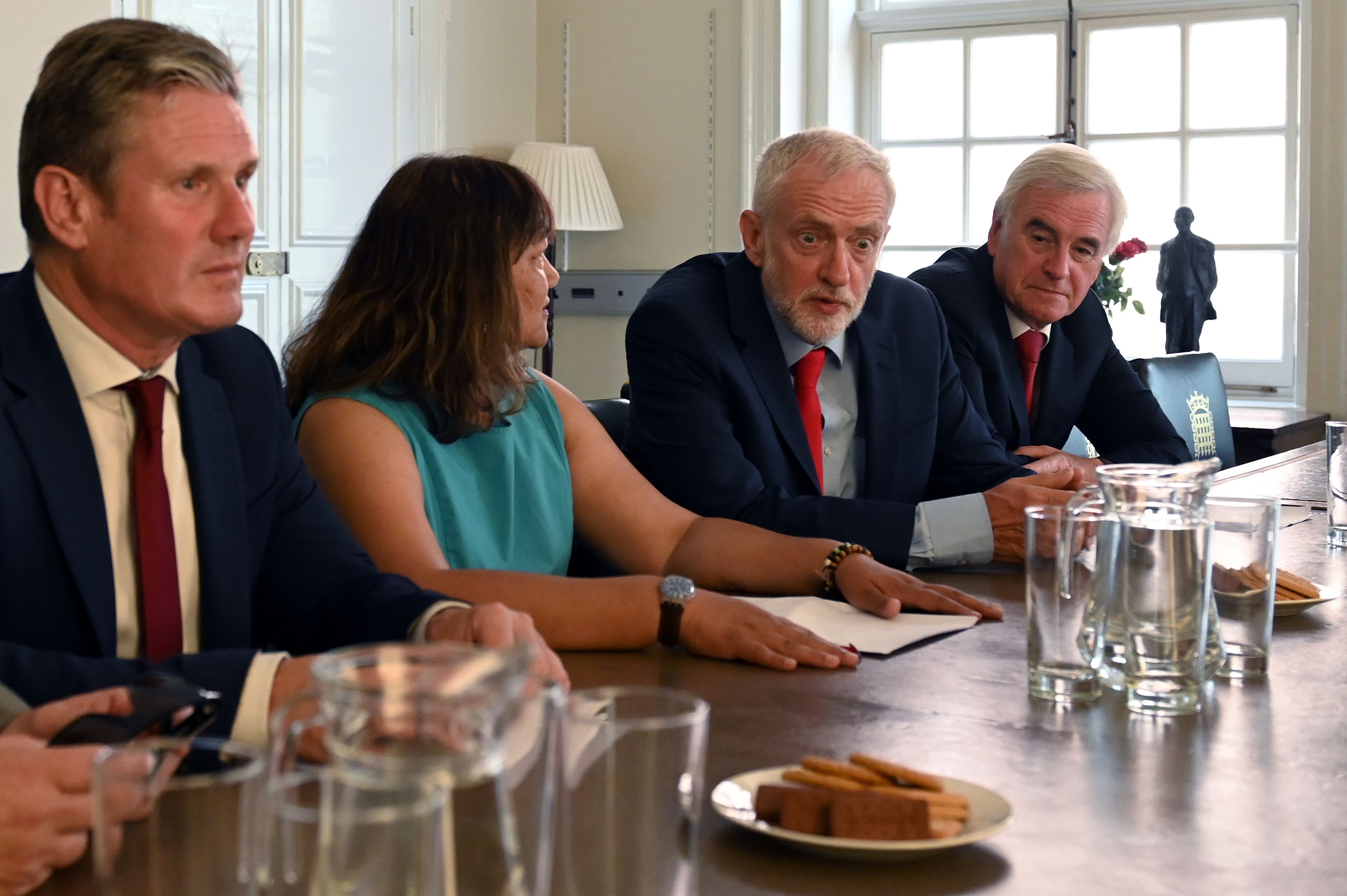 How will Boris shut down Parliament, and what does it mean?

BORIS Johnson has announced he will prorogue – or suspend – Parliament from the middle of September until just a few weeks before the Brexit deadline of October 31.

Remainers are furious at the PM’s move because it means they have a very short amount of time to mount a credible legal challenge against No Deal.

Proroguing sees the end of a parliamentary session – no matter what is being debated.

If the Commons is dissolved any bill that is currently being discussed or has not been properly answered will not progress.

MPs are currently in recess – meaning Parliament isn't sitting – which makes it harder for Remainers to push through anti-Brexit legislation or use obscure Parliamentary tricks to do block our divorce from Brussels.

This means Boris could send MPs away and stop them holding up Brexit.

The PM has also announced that a Queen’s Speech – which marks the opening of a session of Parliament – will be held on October 14.

The speech is a list of laws the government plans to get approved over the year – for Boris this could include a number of policy changes he hopes will win him voters in the case of an election. 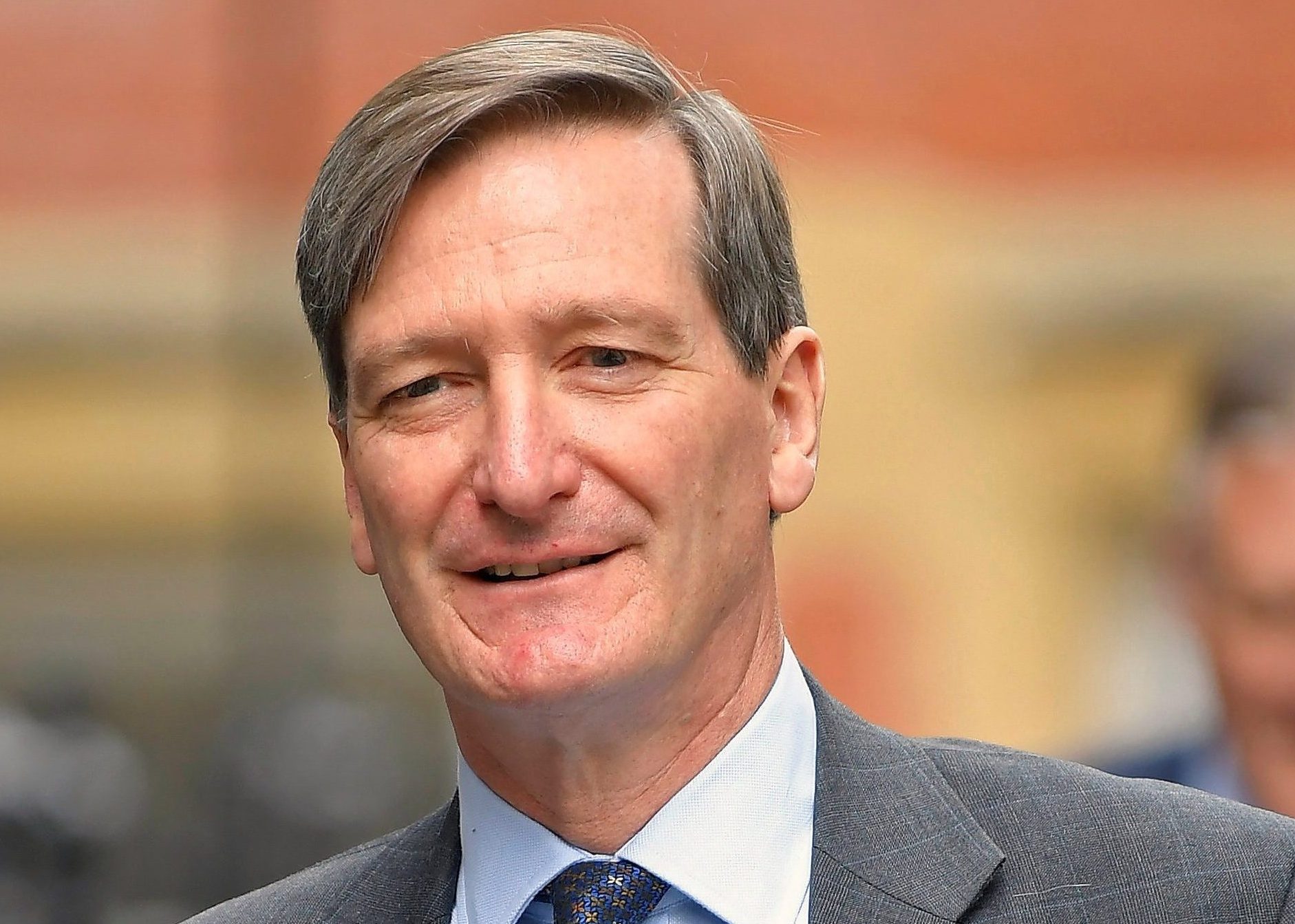 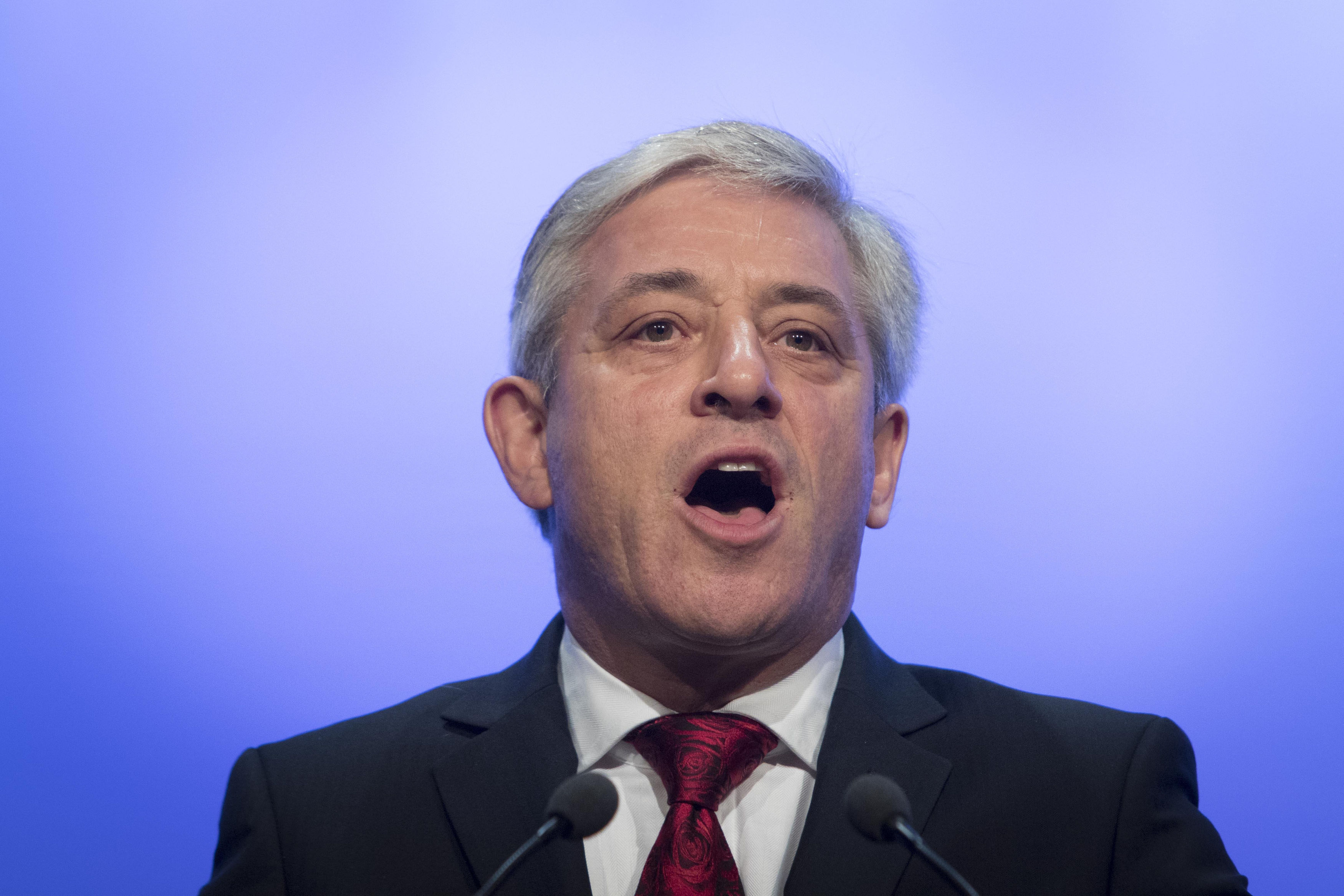