‘The creepier version of your daddy’: Boris Johnson’s pose with Ivanka Trump shocks Twitter users who reckon he looks just like Donald

Boris Johnson’s meeting with Ivanka Trump went ‘fantastically’ – until he posted photos of the exchange on Twitter where he was promptly accused of being ‘a Donald impersonator’.

The accusations appear to stem from the fact that in the photo, the former public schoolboy is doing Trump’s trademark ‘thumbs up’ – while wearing a dark suit, maroon tie and with his characteristic blonde bouffant awry.

Yesterday the Foreign Secretary posted two pictures on Twitter, and said: ‘I had a fantastic afternoon in the White House yesterday, seeing the real spectrum of UK-US cooperation & discussing everything from the Syria crisis to the need for global women’s empowerment with @VPPence, @IvankaTrump and Jared Kushner.’ 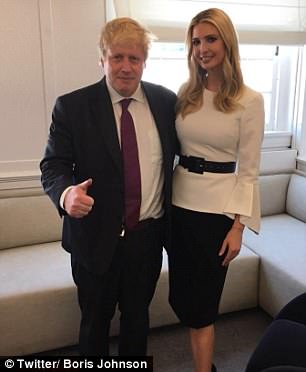 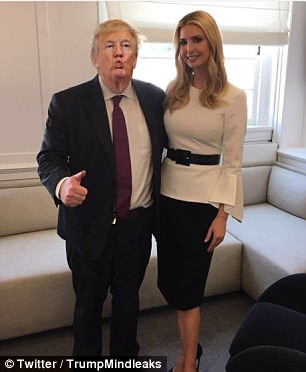 On the left is the picture the Foreign Secretary posted of himself and Ivanka. On the right, a tweaked Twitter image with Mr Johnson’s head replaced by Donald Trump’s – with eerie results

But it was only when the US President’s daughter retweeted the images today that people noticed the startling resemblance.

A twitter said: ‘This looks like Ivanka posing with a trump impersonator.’ Another said: ‘That tie. The hair. The thumbs up. Ivanka. Is Boris engaging in Trump cosplay?

One Twitter user added: ‘The creepier version of your daddy’ and another said: ‘Bloody hell. He’s even doing the ‘thumb”.

Others were not happy with the MP’s stance. One said: ‘Get some self respect, don’t ever do Trump’s idiotic thumbs up thing ever again.’ 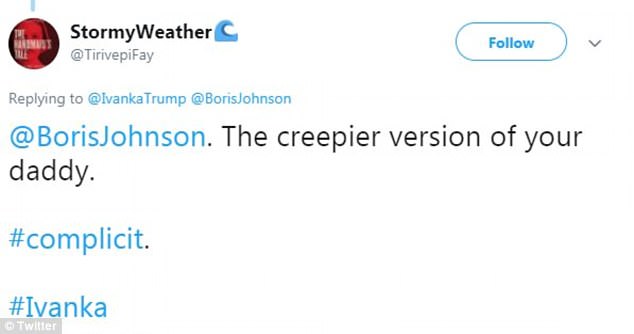 The meeting came just 24 hours before Britain joined France and Germany in recommitting to the Iran nuclear deal after Trump ignored their pleas and pulled the United States out of the accord.

The US president said he would impose the ‘highest level’ of economic sanctions on Iran as he claimed the state was on the brink of acquiring nuclear weapons.

Tehran immediately responded by warning it would begin enriching more uranium than ever if negotiations with other countries in the pact failed.

President Hassan Rouhani said he would send foreign minister Mohammad Javad Zarif to visit each of the remaining countries involved in the deal.

Former president Barack Obama said the decision was a ‘serious mistake’ that could leave the US facing ‘a losing choice between a nuclear-armed Iran or another war in the Middle East’.

In a joint statement, Theresa May May, German chancellor Angela Merkel and French president Emmanuel Macron said the decision was a matter of ‘regret and concern’.

But Israeli prime minister Benjamin Netanyahu hailed Mr Trump for the ‘bold’ move and described the agreement as a ‘recipe for disaster’ that had brought the prospect of war closer.

Britain, France and Germany had made strenuous attempts to persuade the US president to preserve the deal.

On Monday Boris Johnson made a diplomatic dash to Washington in a last-ditch push to win over the president. The visit came soon after Mrs Merkel and Mr Macron made direct appeals to Mr Trump in face-to-face talks.

But the diplomatic efforts failed to secure even a delay in the announcement.

Speaking in the White House, Mr Trump said the agreement was ‘disastrous’ and a ‘great embarrassment’ to him.

‘The Iran deal is defective at its core,’ he said. ‘If we do nothing, we know exactly what will happen.

‘In just a short period of time, the world’s leading state sponsor of terror will be on the cusp of acquiring the world’s most dangerous weapon.

‘Therefore, I am announcing today that the United States will withdraw from the Iran nuclear deal.’

Mr Trump said the move was a sign that the US ‘no longer makes empty threats’.

‘When I make promises, I keep them,’ he said.

In a joint statement, Mrs May, Mrs Merkel and Mr Macron said they remained committed to the deal.

They said: ‘It is with regret and concern that we, the leaders of France, Germany and the United Kingdom, take note of President Trump’s decision to withdraw the United States of America from the Joint Comprehensive Plan of Action (JCPOA).

‘Together, we emphasise our continuing commitment to the JCPOA. This agreement remains important for our shared security.’

They added: ‘We encourage Iran to show restraint in response to the decision by the US; Iran must continue to meet its own obligations under the deal, co-operating fully and in a timely manner with IAEA (the International Atomic Energy Agency) inspection requirements.’

Russia said it was ‘deeply disappointed’ by the president’s decision, saying it was ‘extremely concerned’ that the US was acting in its own ‘narrow’ and ‘opportunistic’ interests and ‘grossly violating the norms of international law’.

The Joint Comprehensive Plan of Action was signed by the US, China, Russia, Germany, France and Britain with Iran in 2015.

Under its terms, Iran is committed to a peaceful nuclear energy programme.