Boris Johnson offered to wrestle health critics to prove his fitness today as he faced down claims he is still struggling with coronavirus.

In his virtual speech to the Conservative Party Conference he attacked ‘nonsense’ suggestions that his battle with Covid in the spring had ‘robbed me of my mojo’.

But he admitted at the same time that he had been ‘too fat’ and that had made his battle against the virus harder, including hospitalisation in intensive care.

Appearing to quote from M People’s 1995 hit Search For The Hero he said he would continue a diet that had seen him shed 26lb – almost two stone – because ‘you have got to search for the hero inside yourself.’

In a punchy speech that tried to put across an upbeat message int he middle of the pandemic, he said:  ‘I have read a lot of nonsense recently about how my own bout of Covid has somehow robbed me of my mojo.

‘And of course this is self-evident drivel, the kind of seditious propaganda you would expect from people who don’t want this country to succeed, who wanted to stop us delivering Brexit and all out other manifesto pledges. I can tell you no power on earth was and is going to do that. 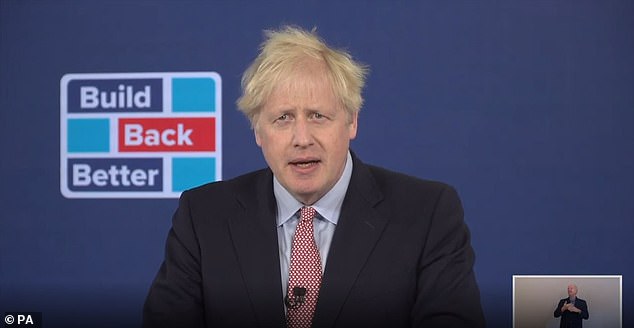 In his virtual speech to the Conservative Party Conference he attacked ‘nonsense’ suggestions that his battle with Covid in the spring had ‘robbed me of my mojo’. 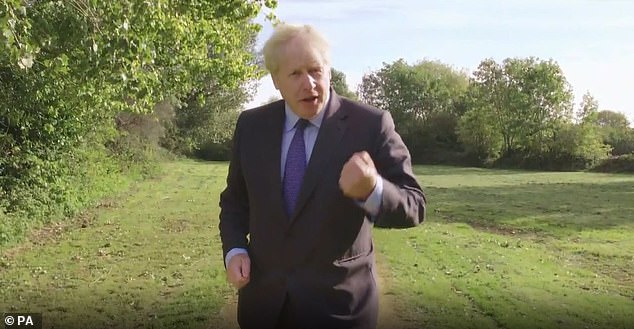 ‘I could refute these critics of my athletic abilities in any way they want – arm wrestling, leg wrestling, Cumberland wrestling, sprint-off, you name it.

‘And yet I have to admit the reason I had such a nasty experience with the disease is that although I was superficially in the pink of health when I caught it I had a very common underlying condition.

‘My friends I was too fat and I have since lost 26lb and you can imagine that in bags of sugar and I am going to continue that diet because you have got to search for the hero inside yourself in the hope that the individual is considerably slimmer.’

The PM said that the UK economy had some ‘chronic underlying problems’ before the coronavirus pandemic, as he vowed to raise the ‘overall productivity’ of the country after the crisis.

‘And far too many people across the whole country who felt ignored and left out, that the government was not on their side. And so we can’t now define the mission of this country as merely to restore normality – that isn’t good enough.

‘In the depths of the Second World War, when just about everything had gone wrong, the government sketched out a vision of the post-war new Jerusalem that they wanted to build, and that is what we’re doing now, in the teeth of this pandemic.’

Mr Johnson vowed to ‘reform our system of government, to renew our infrastructure, to spread opportunity more widely and fairly, and create the conditions for a dynamic recovery that is led not by the state but by free enterprise’.

The Prime Minister continued: ‘After 12 years of relative anaemia, we need to lift the trend rate of growth. We need to lift people’s incomes, not just go back to where we were.

‘And it’s clear from Covid that we need the economic rebuttalists to deal with whatever the next cosmic spanner may be hurtling towards us in the dark, and the only way to ensure true resilience and long term prosperity is to raise the overall productivity of the country.’