Signs of nerves? Boris Johnson recreates famous Love Actually doorstep scene to warn Tory supporters the election is ‘closer than you think’ and they must turn out to vote

Boris Johnson has urged voters to bring him Christmas good tidings at the ballot box on Thursday by replicating a memorable scene from the festive film Love Actually.

Hoping to tap into the seasonal mood, a Conservative election broadcast which aired tonight starred the Prime Minister as one of the movie’s hopeless romantics who uses a slideshow of placards to tell a woman he loves her.

But etched on the Tory leader’s cards were his core Brexit messages that he is relentlessly hammering as the race for Number 10 enters the home straight.

Scores of activists are already braving the bitter December chill in a last-gasp canvassing effort – and Mr Johnson was also pictured on the doorstep on TV screens this evening.

Clutching a pile of billboards and a stereo playing carols, he emulated the famous scene between Andrew Lincoln and Keira Knightly. 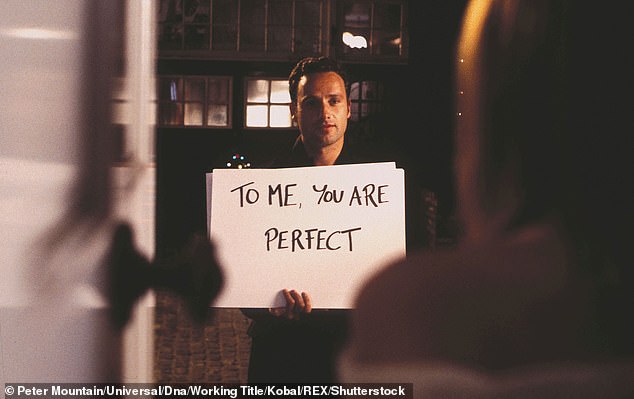 One by one he turned over the cards – which each only had a few words on – addressed to a woman he was trying to woo from across the threshold.

They read: ‘With any luck, by next year. We’ll have Brexit done. If Parliament doesn’t block it again. And we can move on.’

Although the polls suggest the PM is at least six points clear of Jeremy Corbyn, he has been eager to downplay his chances of victory to not deter Tory voters believing the result is a done deal from casting their ballot.

In the broadcast, he continued: ‘ But for now let me say. Your vote has never been more important. The other guy could win.’

‘So you have a choice to make. ‘Between a working majority. ‘Or another gridlocked hung parliament. ‘Arguing about Brexit. ‘Until I look like this.’

He then showed a picture of a scruffy blonde sheepdog which prompted a snort of laughter from the redhead woman. 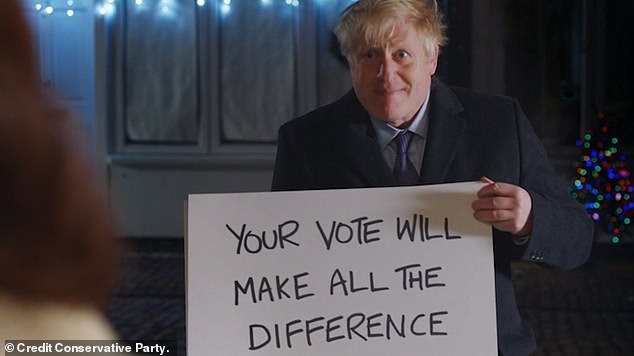 Mr Johnson continued: ‘It’s closer than you think. We only need nine more seats to get an election. And on 12th December. Your vote will make all the difference. Merry Christmas.’

Love Actually is widely regarded as one of the nation’s favourite Christmas films and is often re-watched by families on December 25.

But the star of the 2003 rom-com, Hugh Grant, who plays the prime minister, is an active Remain activist and has been leafleting with pro-EU Lib Dem and Labour candidates.

He said voters should swing behind the Tories to avoid waking up in Friday the 13th to see the ‘Nightmare on Downing Street’ – Prime Minister Corbyn.

Strategists in Conservative HQ are wargaming to avoid what is being dubbed the TnT threat to a majority.

Although a Labour surge is closing the gap, Mr Johnson is still the frontrunner which the Conservatives hope does not lure their supporters into a false sense of security that he is certain to win.

And in the first December ballot since 1923, they are pinning their hopes on their elderly voters flocking to polling stations in what may be grim weather.