Boris Johnson yesterday urged MPs to give Theresa May the ‘time and space’ to deliver on her Brexit promises.

The Foreign Secretary said he believed Brexiteers’ fears of a ‘betrayal’ were unfounded.

But in a warning shot over a ‘backstop’ plan that could keep Britain tied to the EU’s customs union beyond Brexit, Mr Johnson stressed that ministers should not be planning to fail.

He said the Prime Minister must deliver a final deal that leaves Britain ‘unhindered’ to strike new trade deals across the world.

Mr Johnson’s plea for Eurosceptics to give Mrs May the chance to negotiate will raise eyebrows as it comes just a fortnight after he dismissed her preferred plan for a customs partnership as ‘crazy’. 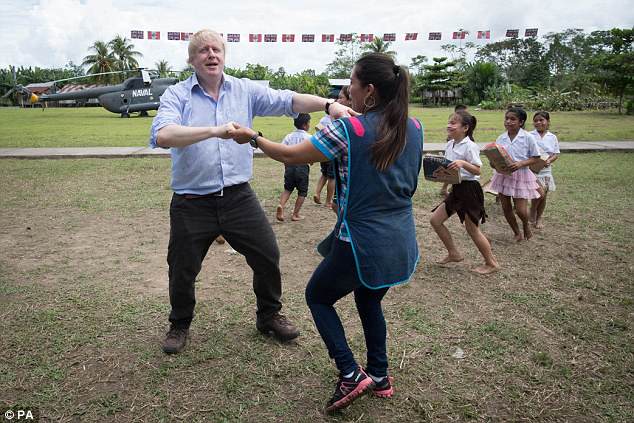 Boris Johnson urged MPs to give Theresa May the ‘time and space’ to deliver on her Brexit promises during a five-day trip to South America (pictured: dancing with a teacher in Peru)

The backstop was agreed by her Brexit ‘war cabinet’ last week, despite reservations from Brexiteers including Mr Johnson and Michael Gove.

Speaking from Buenos Aires during a five-day trip to South America, Mr Johnson said last night that countries across the world were ‘very keen’ to get on with striking trade deals. He said: ‘Brexiteers fearing betrayal over the customs backstop must understand that the Prime Minister has been very clear that it is not an outcome we desire – we want a deal with the EU and she will deliver it.

‘I’m convinced the Prime Minister will be true to her promises of a Brexit deal that sees Britain come out of the customs union and single market, have borders as frictionless as possible, reject European Court of Justice interference, control immigration and free to conduct unhindered free trade deals across the world.

‘We must now give the Prime Minister time and space to negotiate this Brexit vision.’

Mr Johnson arrived in Argentina yesterday after spending the weekend in Peru, where he visited the remote village of Santa Marta and danced with local teachers and pupils.

‘Already during my time in South America I’ve been bowled over by the optimism and excitement from nations keen to forge deeper ties and new trading relationship with the UK,’ he said.

Mr Johnson’s remarks come after Jacob Rees-Mogg warned the latest customs union plans would leave the country in limbo. The MP said last week: ‘People voted to leave, they did not vote for a perpetual purgatory.’

Mrs May’s backstop will see the UK temporarily stick to EU tariffs if new customs technology needed to prevent the creation of a ‘hard border’ in Ireland is not ready by the end of the Brexit transition in December 2020.

The proposal raised fears the UK could become permanently shackled to the customs union, limiting the ability to strike new trade deals. But sources insisted ministers were discussing a possible extension lasting ‘months rather than years’. 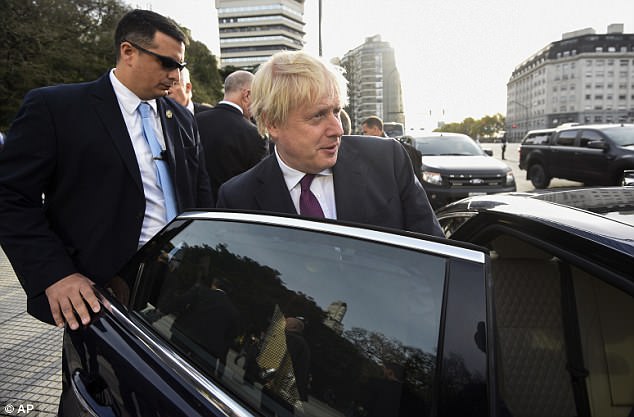