London: UK Prime Minister Boris Johnson was due to fly home from New York on Wednesday to confront a political crisis that threatens to sink his Brexit plans and his government, after a court found he had broken the law by telling the Queen to shut down Parliament.

After yet another historic and chaotic day in Brexit Britain, Johnson faced calls from Opposition leaders, some rebel ex-Conservative MPs and at least one government minister for him to resign. 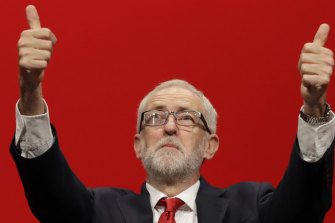 Jeremy Corbyn made an unscheduled speech to Labour Party members in Brighton. Credit:AP

Scottish National Party leader Nicola Sturgeon said Johnson should do the “decent and honourable thing” and resign, and the SNP's Joanna Cherry, who took the case to court, said the ruling was an "absolutely momentous decision" and Johnson’s “position is untenable and he should have the guts, for once, to do the decent thing and resign."

Brexit Party leader Nigel Farage said Johnson must, "as a matter of honour", offer his resignation to MPs in Parliament on Wednesday.

But the government was defiant.

In New York, where he was attending a United Nations climate conference, Johnson said he “would not be deterred” in his plan to take Britain out of the EU on October 31.

“I have the highest respect of course for our judiciary and the independence of our courts but I must say I strongly disagree with this judgment,” he said.

Corbyn said the political crisis in the UK could only be settled with a general election.

However Labour appears unwilling to use the return to Parliament to stage an official vote of no confidence in the government, which would trigger an election.

Corbyn said the election would take place “as soon as this government’s threat of a disastrous no-deal [Brexit] is taken off the table”, saying Johnson could not be trusted not to use an election campaign as cover to let the country crash out of the European Union on October 31 without a formal Brexit withdrawal deal. 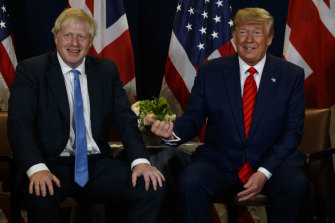 British PM Boris Johnson was at the United Nations General Assembly with Donald Trump on Tuesday.Credit:AP

And Labour might not have the numbers for a no-confidence motion. The Johnson government cannot command a majority in Parliament, after expelling more than 20 rebel MPs who crossed the floor on Brexit votes – but many of those rebels still consider a Corbyn government a worse option than a reformed Conservative one.

Instead the return of Parliament could see further action to ensure the government cannot deliberately leave the EU without a withdrawal deal.

The Prime Minister is likely also to be called to give evidence to a senior parliamentary committee.

House of Commons speaker John Bercow said he had instructed the House to prepare for the resumption of business on Wednesday morning, local time. The House of Lords will resume in the afternoon.

The return of Parliament is likely to throw the annual Conservative party conference, due to begin in Manchester this weekend, into chaos, with MPs worried they could be stranded out of London while their opponents make hay in Westminster.