‘Father Christmas is ready and raring to go’: Boris Johnson confirms Santa WILL deliver presents this year ‘provided he behaves in his usual responsible way’ in letter to eight-year-old boy worried he wouldn’t come because of coronavirus

The Prime Minister has written to allay the fears of children across the country by confirming Father Christmas will be ‘packing his sleigh and delivering presents’ this year despite Covid restrictions.

Boris Johnson set out the rules Santa must follow in reply to a message from eight-year-old Monti, who had written to the PM asking for clarity on the subject and the help of the UK’s top scientific minds.

‘Dear Mr Johnson, I am eight years old and I was wondering if you and the government had thought about Santa coming this Christmas,’ wrote Monti.

‘If we leave hand sanitiser by the cookies can he come? Or will he wash his hands? I understand you are very busy but can you and the scientists please talk about this.’

Mr Johnson shared his letter of reply on Twitter, adding that he had received ‘lots of letters about this’ and had consulted with experts about the issue.

‘I have put in a call to the North Pole and I can tell you Father Christmas is ready and raring to go, as are Rudolph and all of the other reindeer,’ wrote the Prime Minister. 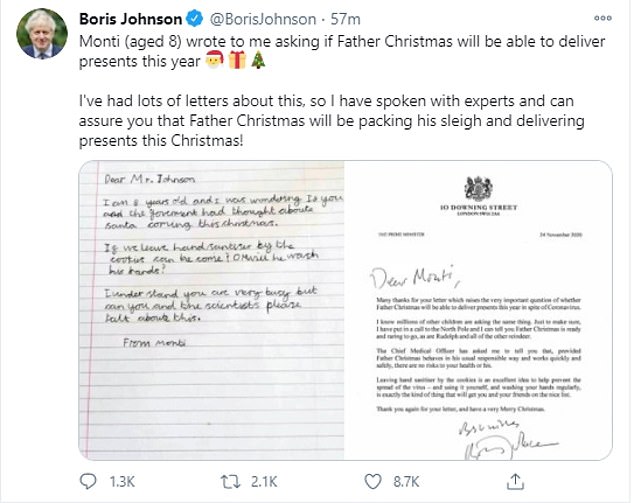 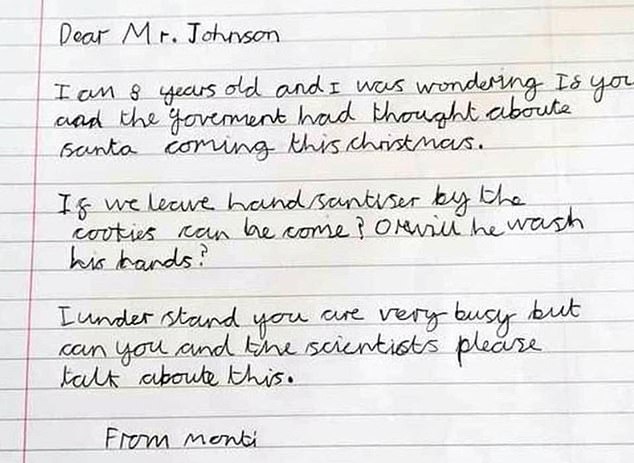 Boris Johnson set out the rules Santa must follow in reply to a message from eight-year-old Monti, who had written to the PM asking for clarity on the subject and the help of the UK’s top scientific minds 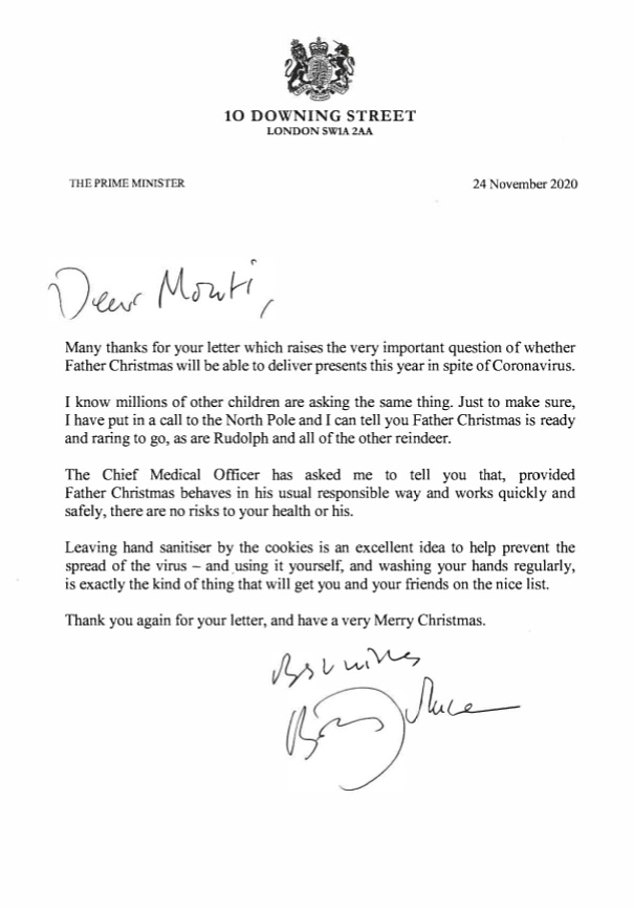 ‘I have put in a call to the North Pole and I can tell you Father Christmas is ready and raring to go, as are Rudolph and all of the other reindeer,’ wrote the Prime Minister

‘The Chief Medical Officer has asked me to tell you that, provided Father Christmas behaves in his usual responsible way and works quickly and safely, there are no risks to your health or his.’

‘Using it yourself, and washing your hands regularly, is exactly the kind of thing that will get you and your friends on the nice list,’ he wrote.

Mr Johnson is the latest leader to confirm to the nation’s children that Father Christmas will not be stopped by coronavirus.

In October, Nicola Sturgeon was forced to make a promise to Scottish children that Santa would still deliver their Christmas presents – after her top medical advisor said hopes of a traditional festive gathering were a ‘fiction’.

The First Minister joked that her national clinical director Professor Jason Leitch would be portrayed as the Grinch on newspaper front pages after he said families should prepare to see loved ones over Zoom because of coronavirus.

She attempted to play down the significance of his remarks at her daily press conference today as she came under increasing fire over a five-tier lockdown system set to be even tougher than Boris Johnson’s in England.

The First Minister has been hit with a wave of anger after it emerged she wants to take a harsher approach than the PM, with more levels of curbs to tackle the pandemic.

Ms Sturgeon was faced by a barrage of questions as she faced the media, after Prof Leitch told BBC Scotland this morning that while there may be some ‘normality’ over Christmas, ‘we’re not going to have large family groupings with multiple families around, that is fiction for this year’.

After a question about Santas having to use Zoom in their grottos across the country, she turned to the camera and said: ‘On Santa, if there are any kids watching: Santa will not be prevented from delivering your presents on Christmas Eve, Santa is a key worker and he has got lots of magic powers that make him safe to do that.

‘If he is having to do Grotto appearances by Zoom, that is to keep you safe, it is not because he is at any risk. Santa will be delivering presents across the world as normal.’

She added: ‘Since I’m spending so much time responding to Jason’s comments today, I should make him dress up as the Grinch for Halloween and do a briefing to cheer everybody up.’