‘Are you going to side with me, or plunge Britain into Jeremy Corbyn chaos?’ Boris Johnson delivers ultimatum to Tory rebels ahead of Commons showdown on Tuesday

Boris Johnson has given Tory rebels an ultimatum ahead of a Commons clash over Brexit on Tuesday, warning: ‘It’s me or Jeremy Corbyn’.

Downing Street ratcheted-up the rhetoric, with those trying to create a cross-party MP group to stop a no-deal Brexit branded ‘deceitful and underhand’.

While he is offering a £3.5billion spending ‘bonanza’ for local authorities, including £1billion for social care, he told the Sunday Times the alternative to not backing him through Brexit is ‘Corbyn chaos’.

He said: ‘I just say to everybody in the country, including everyone in parliament, the fundamental choice is this: are you going to side with Jeremy Corbyn and those who want to cancel the referendum?

‘Are you going to side with those who want to scrub the democratic verdict of the people – and plunge this country into chaos.’ 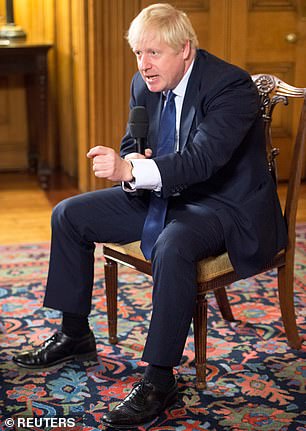 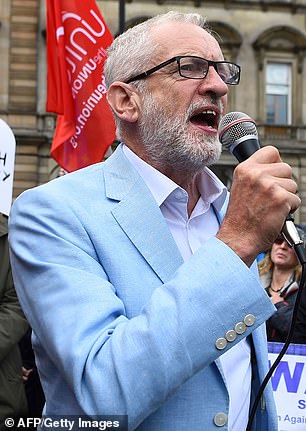 Boris Johnson (pictured on Friday, left) has given Tory rebels an ultimatum ahead of a Commons clash over Brexit on Tuesday, warning: ‘It’s me or Jeremy Corbyn’ (pictured yesterday in Glasgow, right)

The comments came ahead of an expected Commons clash on Tuesday when opponents of no- deal look set to try and seize control of the parliamentary agenda to push through legislation that would force the PM to seek a Brexit extension from Brussels beyond October 31.

Staunch Johnson ally and Leader of the Commons Jacob Rees-Mogg strongly attacked such an action.

Mr Rees-Mogg told The Mail on Sunday: ‘They dare not use the confidence procedures because they know that Jeremy Corbyn is too unpopular, and therefore they seek deceitful ends by underhand means.’

Reports that any bid to extend Brexit to stop a no-deal exit would be treated as a no confidence issue, with supporting Tory MPs stopped from standing for the party, drew a harsh response from Mr Hammond. 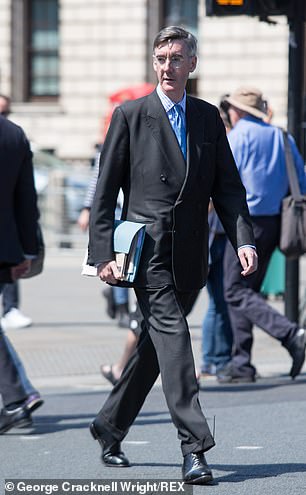 Jacob Rees-Mogg has backed Mr Johnson’s position, daring Remainers to try to bring his leader down next week

The ex-chancellor tweeted: ‘If true, this would be staggeringly hypocritical: 8 members of the current cabinet have defied the party whip this year.

‘I want to honour our 2017 manifesto which promised a ‘smooth and orderly’ exit and a ‘deep and special partnership’ with the EU. Not an undemocratic No Deal.’

A Government spokesman said: ‘All options for party management are under consideration, but first and foremost the PM hopes MPs will deliver on the referendum result and back him on Parliament.’

Some 20 Tory former ministers are considering standing at the next election as independent Conservatives rather than back a no-deal option, the Sunday Times said.

Tens of thousands of protesters demonstrated against Mr Johnson’s plans to suspend Parliament for up to five weeks ahead of the return of MPs from their summer recess.

The EU’s chief Brexit negotiator Michel Barnier again insisted he would not scrap the Irish backstop proposals in the Withdrawal Agreement that Mr Johnson has branded unacceptable.

Writing in the Sunday Telegraph, Mr Barnier insisted the measures, aimed at preventing a hard border across Ireland, represented the ‘maximum flexibility’ that Brussels can offer.

It is understood that the Chancellor was not informed of the dismissal beforehand and Ms Khan was escorted out of Downing Street by a police officer after being fired.

Yvette Cooper, the Labour chair of the House of Commons home affairs select committee, told The Observer: ‘Government advisers must not abuse their power by drawing the police into heavy- handed political stunts.

‘This needs to be reviewed by the cabinet secretary and the Metropolitan police straight away.’