Boris Johnson has urged world leaders to hold their nerve for a long, protracted war in Ukraine, or risk the ‘greatest victory for aggression in Europe since the Second World War’.

In a thinly-veiled barb at Emmanuel Macron’s pleas to ‘make nice’ with warmonger Putin, the Prime Minister has said a Russian victory in Ukraine would be ‘catastrophic’ and urged the international community to use its power to expel Moscow’s invading armies.

‘We’ve got to make it clear that we are supporting the Ukrainians in their ambitions… to expel the Russians, expel Putin’s armies, from everything that he has obtained since February 24, and make sure the Ukrainians are not encouraged to go for a bad peace, something that simply wouldn’t endure.’

Writing in The Sunday Times, Mr Johnson said: ‘Time is now the vital factor. Everything will depend on whether Ukraine can strengthen its ability to defend its soil faster than Russia can renew its capacity to attack. Our task is to enlist time on Ukraine’s side.’

The Tory leader, himself battling inflation at 40-year highs in Britain and spiralling domestic fuel prices, showed up EU leaders including Macron by telling allies that economic concerns should not lead to a rushed settlement in war-torn Ukraine.

Allowing Russia to keep territory in Ukraine ‘would be the greatest victory for aggression in Europe since the Second World War’, Mr Johnson added.

Whereas Volodymyr Zelensky has praised Mr Johnson’s acts of friendship, the Ukrainian President has blasted Macron’s excuses for Putin – leading to a now-infamous PR gaffe which saw Zelensky scowl at the floor while the French leader hugged him.

Speaking after his second visit to Kyiv, Mr Johnson said: ‘It would a catastrophe if Putin won. He’d love nothing more than to say ”Let’s freeze this conflict, let’s have a ceasefire like we had back in 2014”. For him, that would be a tremendous victory. You’d have a situation in which Putin was able to consolidate his gains and then to launch another attack.

‘We’ve got to make it clear that we are supporting the Ukrainians in their ambitions… to expel the Russians, expel Putin’s armies, from everything that he has obtained since February 24, and make sure the Ukrainians are not encouraged to go for a bad peace, something that simply wouldn’t endure.’

Mr Johnson’s visit to Kyiv – the second in as many months – was warmly welcomed by the Ukrainians, with television footage of Mr Zelensky showing the Prime Minister the wreckage of burned out Russian tanks and other vehicles on display in Kyiv’s St Michael’s Square. 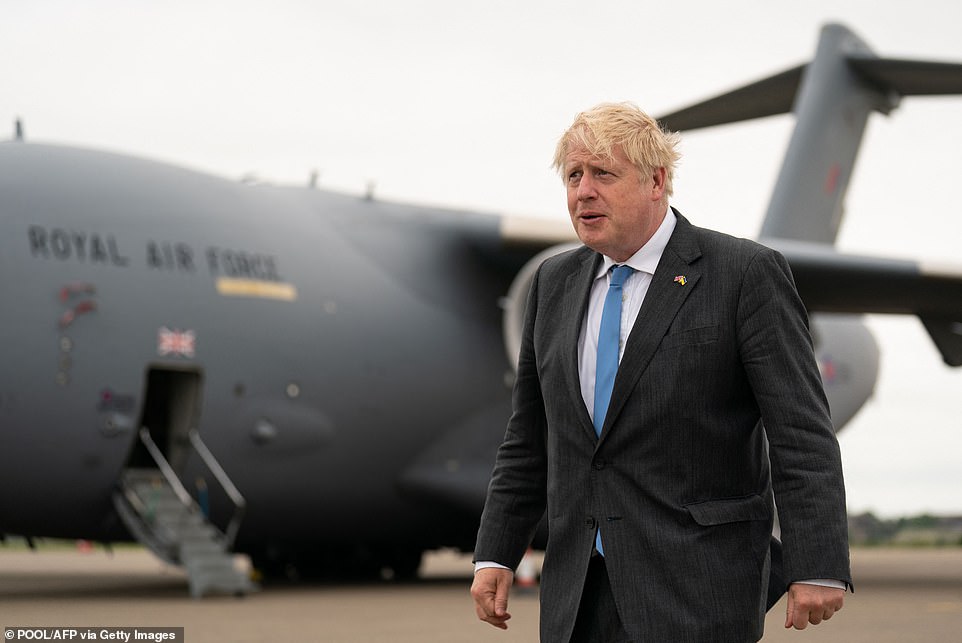 Britain’s Prime Minister Boris Johnson speaks to members of the media after arriving at RAF Brize Norton, west of London having returned from Kyiv in Ukraine, on June 18, 2022 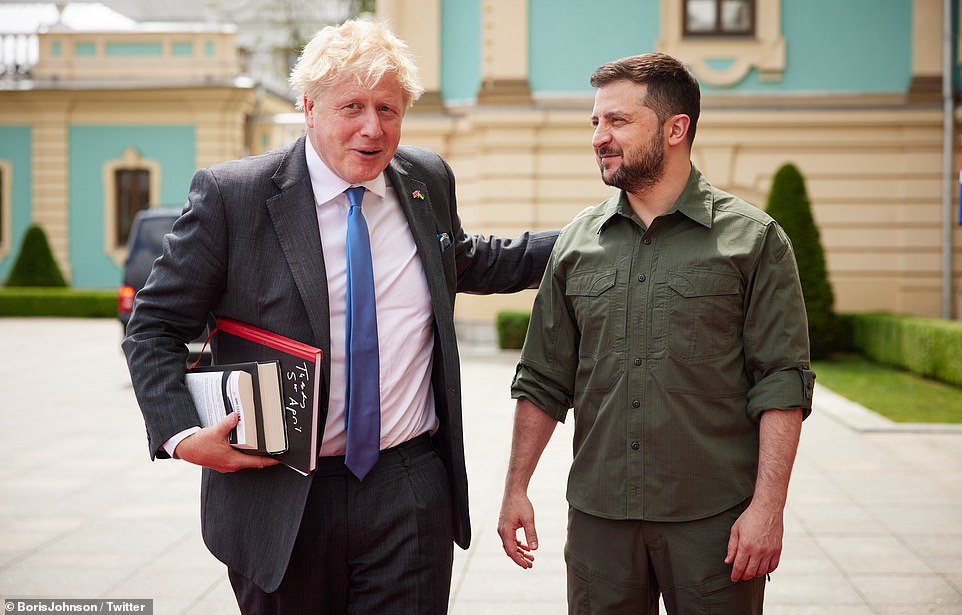 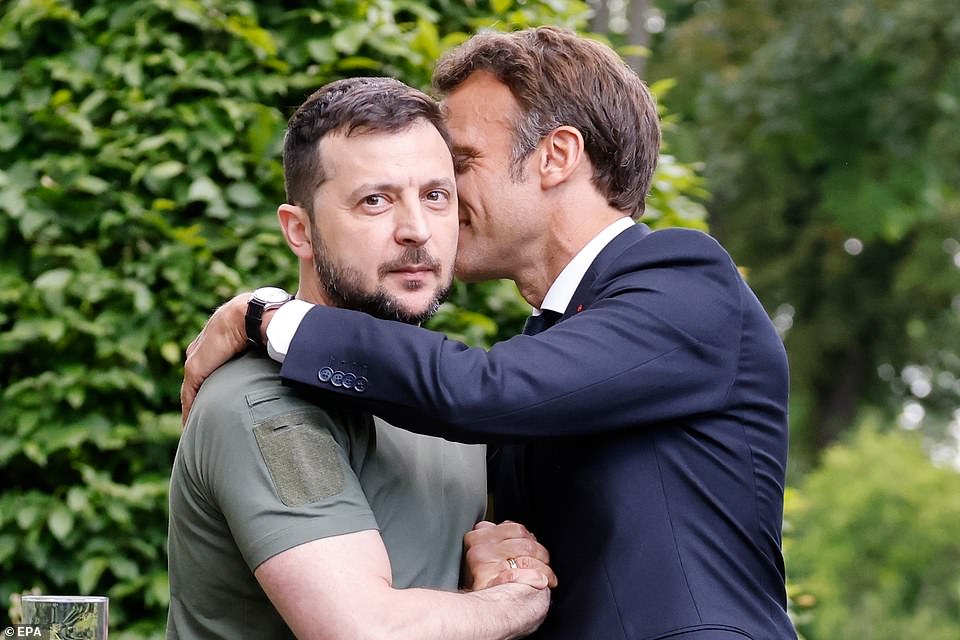 Zelensky appeared much less thrilled to meet French President Emmanuel Macron in Kyiv earlier this week. Zelensky has in recent weeks openly accused Mr Macron of making excuses for Putin, with whom the French leader has claimed to have a strong relationship 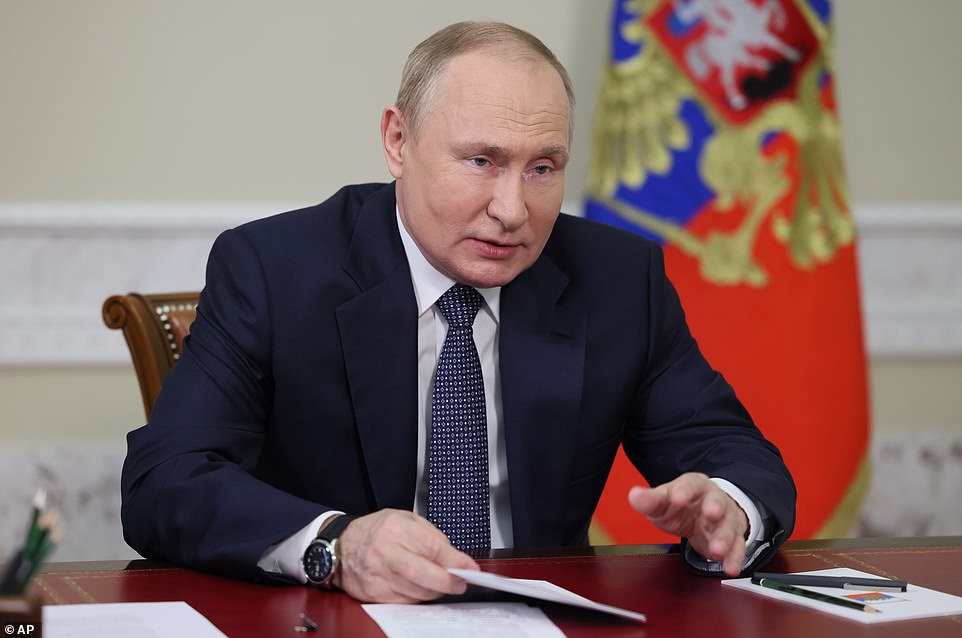 Boris Johnson today declared that Western leaders must steel themselves for a drawn-out conflict in Ukraine amid Russia’s invasion, saying it would be a ‘catastrophe’ if president Vladimir Putin (pictured) was able to claim victory 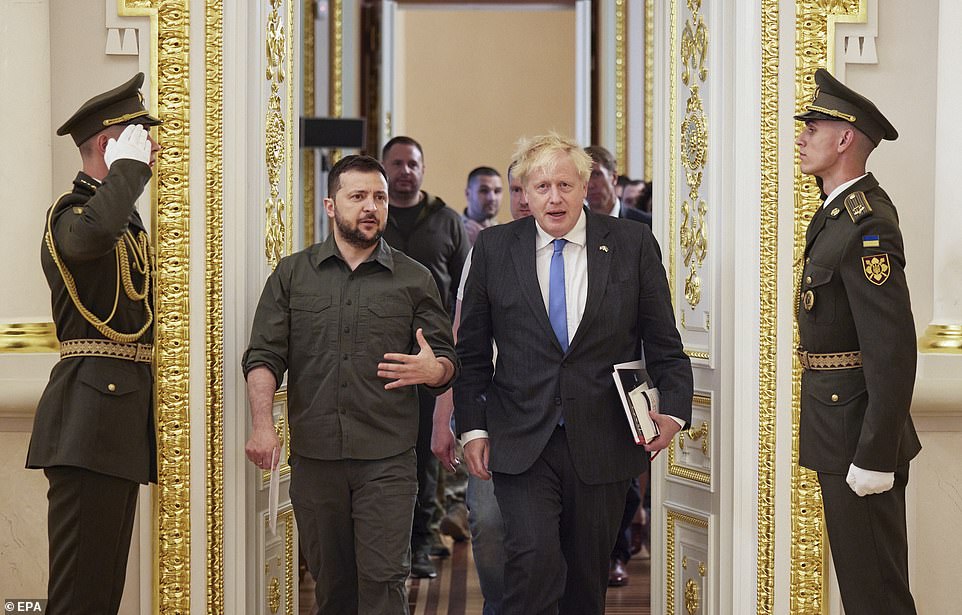 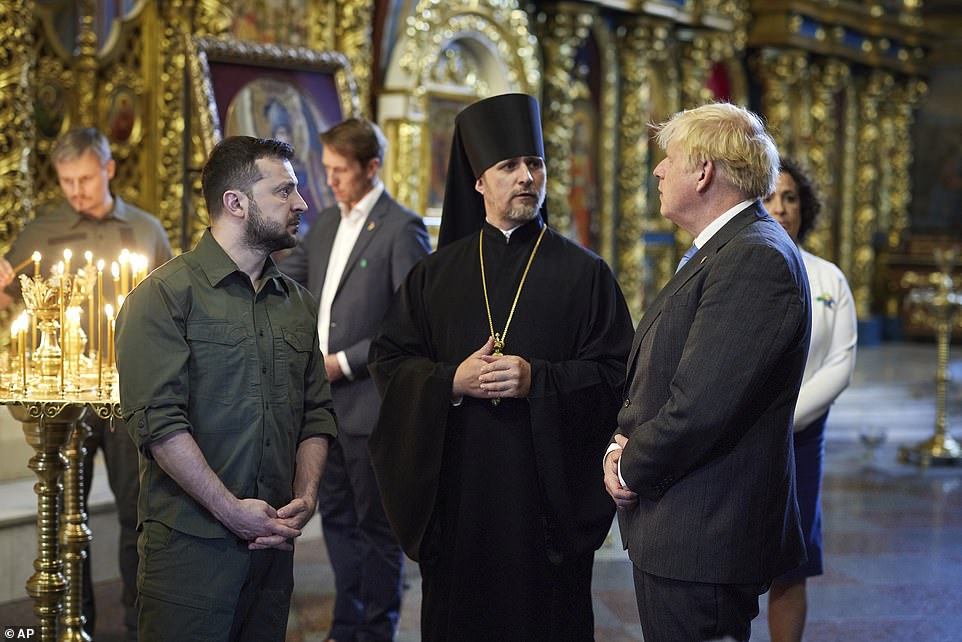 Eurovision SHOULD be held in Ukraine, says Boris Johnson

Boris Johnson has come out in support of Kyiv hosting next year’s Eurovision Song Contest after European broadcasters awarded it to the UK due to safety fears stemming from the war in Ukraine.

The European Broadcasting Union (EBU) said yesterday that it would look elsewhere for a venue, sparking fury from Ukrainian officials who insist they should still be given the chance to host the international event after their entry, folk-rap group Kalush Orchestra, swept to victory.

The EBU approached the BBC to host the event in Britain after the UK’s Sam Ryder finished as runner-up, but Boris Johnson has insisted that Ukraine should host, confident that peace will have returned to Ukraine by the time the competition comes round again in May.

‘I don’t think it’s right,’ Mr Johnson told reporters at RAF Brize Norton following a surprise visit to meet with Ukraine’s President Volodymyr Zelensky in Kyiv. ‘I hope the European Broadcasting Union recognise that. This thing is a year away.

‘It’s going to be fine by the time the Eurovision Song Contest comes around, and I hope the Ukrainians get it because they deserve it.

‘The Ukrainians won it fair and square – even though we had a brilliant entry – and I do think they should be given the chance to to host it.’ 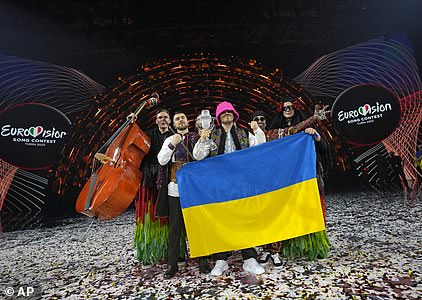 Ukraine’s Kalush Orchestra (pictured) won the event in Turin, Italy, in May with their song ‘Stefania’

Mr Johnson told Mr Zelensky yesterday that the UK is prepared to launch a major operation to train Ukrainian armed forces, training up to 120,000 troops every 120 days to prepare them for combat against Putin’s soldiers.

Mr Johnson said that it was important to prevent the Russians ‘freezing’ the conflict so they could consolidate their gains before mounting another attack.

He said the Ukrainians should be supported in their ambition to regain territory occupied by the Russian forces since they invaded in February.

However, he stopped short of calling for the recovery of all the lands Ukraine had lost since 2014 – including Crimea – something Foreign Secretary Liz Truss has previously called for.

‘We will continue, as we have from the beginning, to provide the military equipment you need – and now, of course, the training that may be necessary to go with that new equipment – so that you, the Ukrainian people, the Ukrainian armed forces, will be able to do what I believe Ukrainians yearn to do, and that is to expel the aggressor from Ukraine,’ Mr Johnson said.

‘That will be the moment for talks about the future of Ukraine and it will be in that context of a free Ukraine that we and other countries will be making the security commitments and guarantees we have discussed so often.’

In a statement, the PM added: ‘My visit today, in the depths of this war, is to send a clear and simple message to the Ukrainian people: the UK is with you, and we will be with you until you ultimately prevail.’

Crowds were shown cheering the two leaders as they walked the streets of Kyiv in a video shared on Twitter by the Prime Minister.

The clip shows him alongside Mr Zelensky visiting a memorial wall for fallen Ukrainian soldiers, and Mr Johnson praised their ‘sacrifice, unconquerable courage and bravery’.

He said: ‘Thank you my friend President Zelensky for hosting me in Ukraine yesterday.

‘It was incredibly moving to walk the streets of Kyiv with you once more, to pay tribute to your fallen soldiers whose sacrifice, unconquerable courage and bravery we will never forget.’

The Prime Minister also shared an image of himself and Mr Zelensky speaking around a table, and lighting candles in a place of worship.

It comes as Mr Johnson was forced to defend his decision to pull out of a conference of northern Tories on Friday so he could meet the Ukrainian President in Kyiv.

The timing of the visit led to accusations that he was snubbing the North ahead of a crucial by-election in Wakefield in West Yorkshire, which the Tories are widely expected to lose.

Speaking to reporters today at RAF Brize Norton on his return from Kyiv, Mr Johnson said it was important to demonstrate the UK’s support at a time when the Ukrainians were ‘suffering terribly’ in the face of the ongoing Russian offensive in the Donbas.

‘I think it is very important to go to Ukraine at a particularly critical time. The worry that we have is that a bit of Ukraine-fatigue is starting to set in around the world,’ he said.

‘It is very important to show that we are with them for the long haul and we are giving them that strategic resilience that they need.’

Following the Prime Minister’s return to the UK, Mr Zelensky said on Saturday he had visited soldiers on the southern front line in the Mykolaiv region and vowed that his armed forces would prevail against Moscow.

A video showed Mr Zelensky in his trademark khaki t-shirt handing out medals and posing for selfies with the servicemen.

European Union countries are expected at a summit next week to grant Ukraine EU candidate status following a recommendation from the bloc’s executive on Friday, putting Kyiv on course to realise an aspiration seen as out of reach before Russia’s Feb. 24 invasion, even if actual membership could take years.

But a decision to grant Ukraine EU candidate status would do nothing to prevent the bloody fighting which is raging across frontlines in the country’s east and southeast.

On the battlefields on Saturday, Severodonetsk, a prime target in Moscow’s offensive to seize full control of the eastern region of Luhansk, was again under heavy artillery and rocket fire as the Russian forces attacked areas outside the industrial city, the Ukrainian military said. 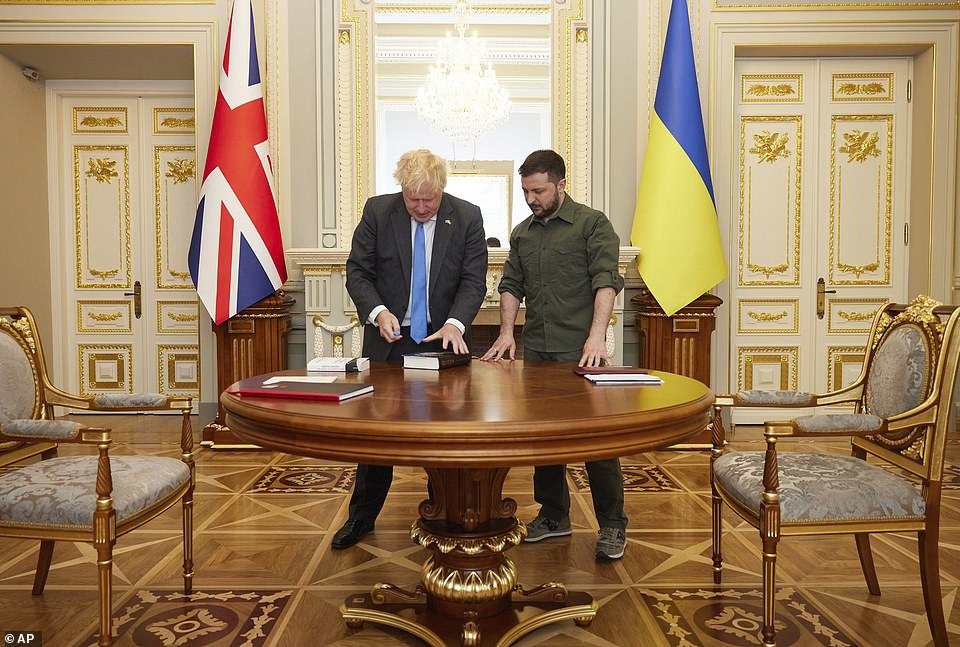 At a press conference, Mr Johnson paid tribute to the Ukrainain forces as he again pledged Britain’s support in their fight to drive out the Russian invaders 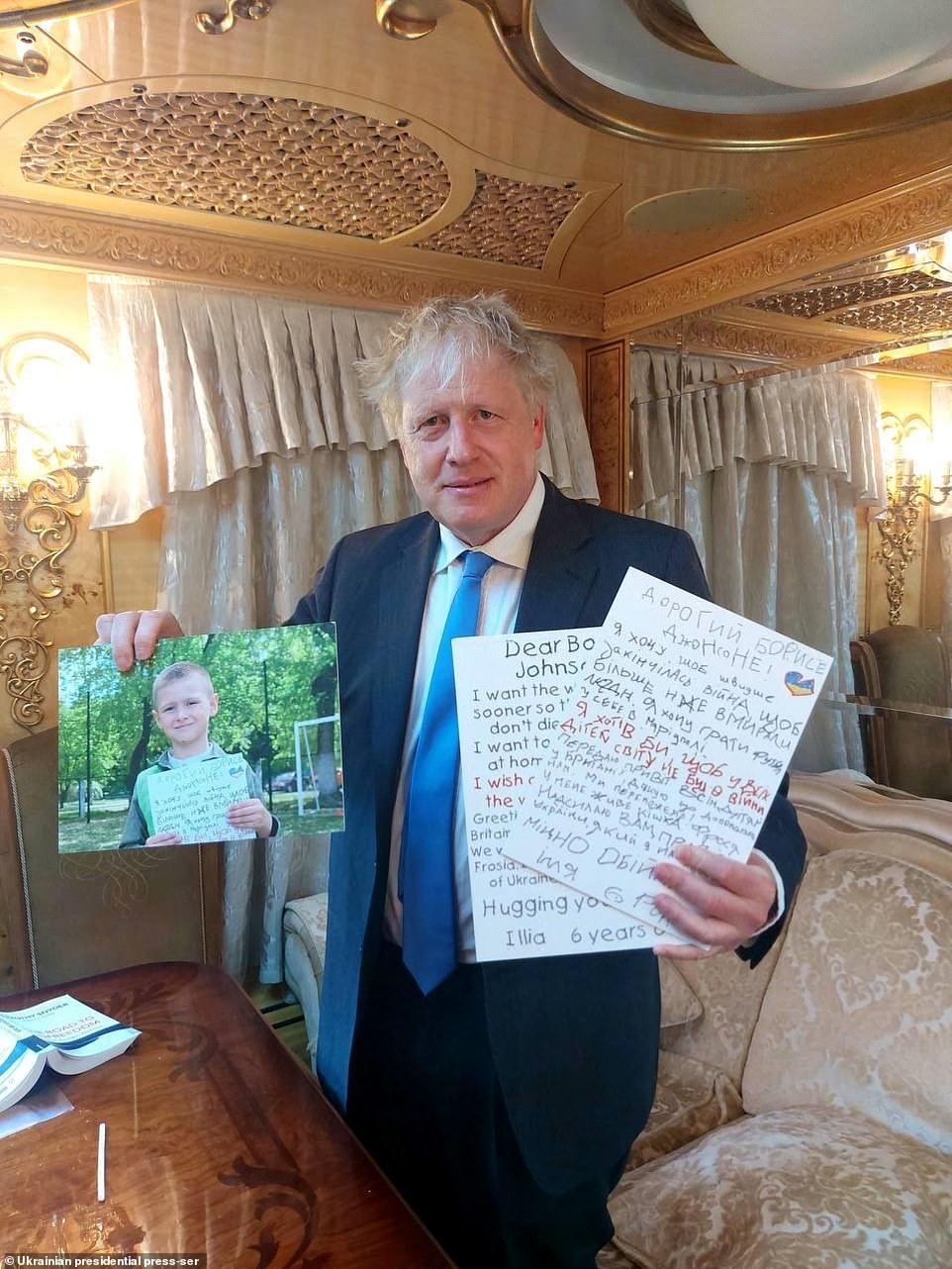 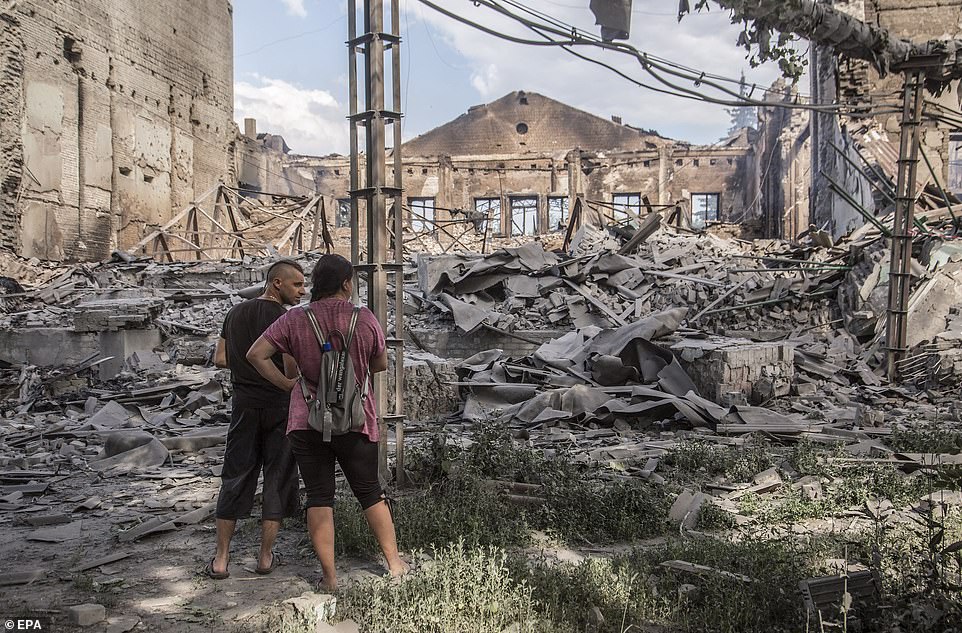 Locals look at destroyed buildings in Lysychansk after heavy fighting in the Luhansk area, Ukraine, 18 June 2022 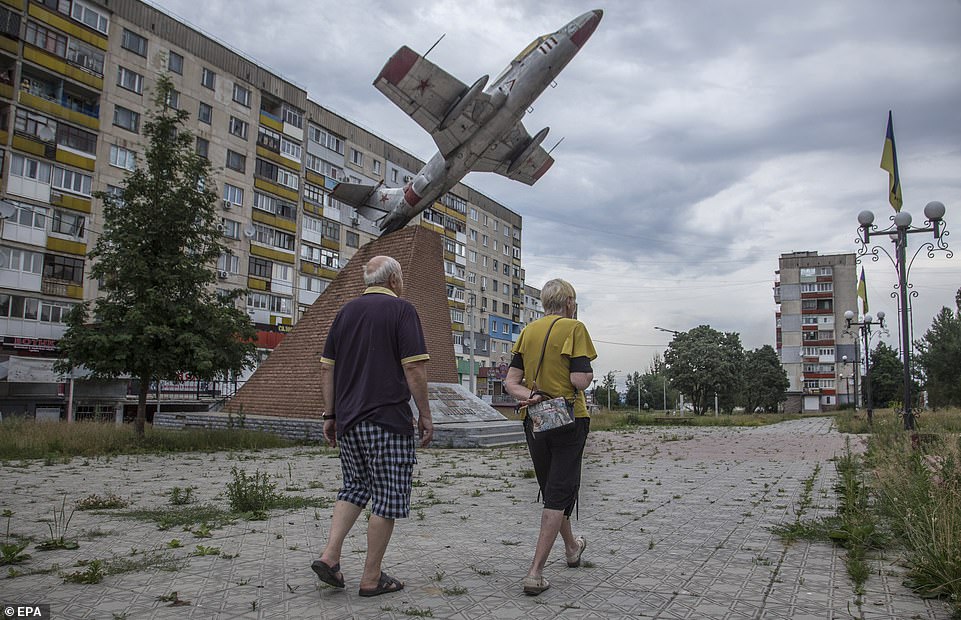 Locals walk on a street in Lysychansk, Luhansk area, Ukraine, 18 June 2022, five kilometers north-east of Severodonetsk. The city and its surroundings have turned into a battlefield in the past weeks 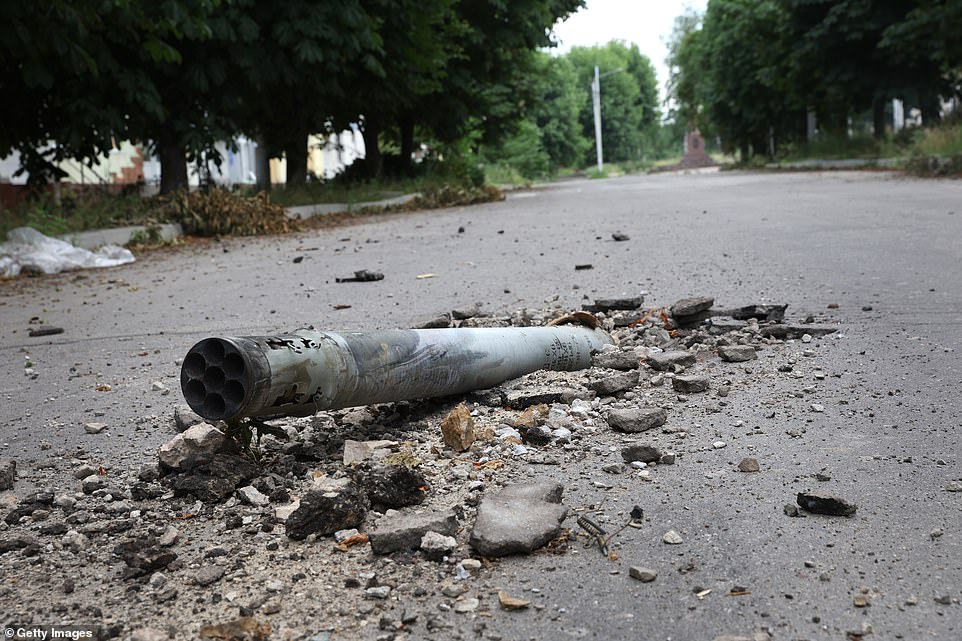 A missile is lodged in the pavement of a street on June 16, 2022 in Lysychansk, Ukraine 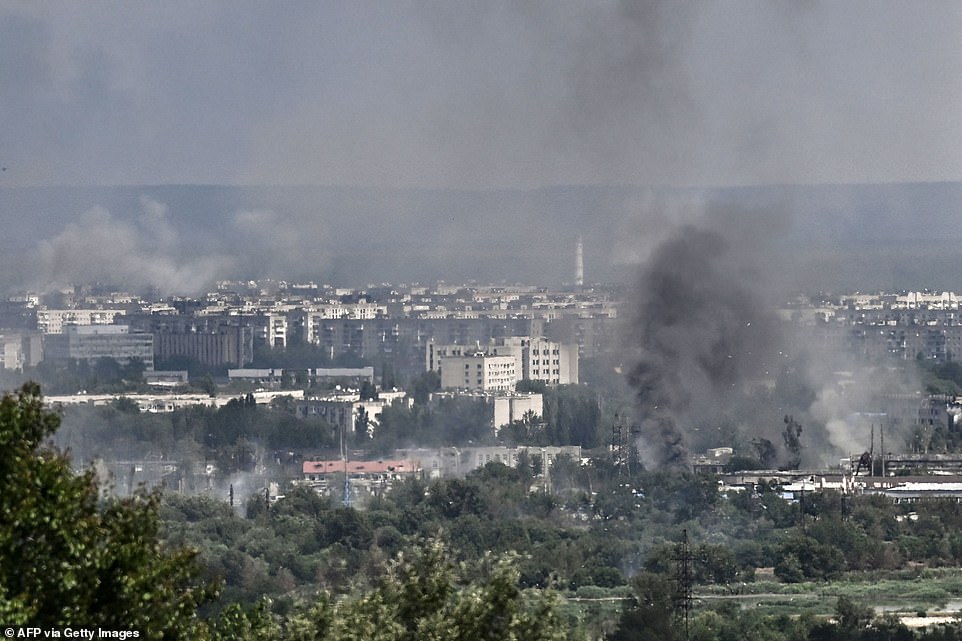 Smoke and dirt rise from the city of Severodonetsk in the eastern Ukrainian region of Donbas on June 17, 2022

Rodion Miroshnik, of the self-styled separatist administration of the Luhansk People’s Republic, posted a video on Telegram of what he said was the cloud, adding that he could not tell if the blast occurred in or near the city.

Luhansk Governor Serhiy Haidai said Russian attacks on towns just south of Severodonetsk were repulsed by Ukrainian forces, although the situation in satellite villages was ‘difficult.’

‘The Russians have thrown all their reserves in the direction of Severodonetsk and Bakhmut,’ he said in an online post.

‘They are trying to establish full control over the regional centre and to cut the Lysychansk-Bakhmut highway. They’re having no success, they are dying en masse.’

Haidai said the city of Lysychansk was under constant shelling but remained fully in Ukrainian hands, although a ‘quiet’ evacuation was underway, and humanitarian convoys were being brought in daily. He said a key highway out of the city was now impassable due to Russian shelling.

To the northwest, several Russian missiles hit a gasworks in Izyum district, and Russian rockets rained on a suburb of Kharkiv, Ukraine’s second-largest city, hitting a municipal building and starting a fire in a block of flats, but causing no casualties, Ukrainian authorities said.

A Russian-backed representative said a big explosion rocked the Severodonetsk area on Saturday and a large orange-coloured cloud could be seen rising into the air.