Ollie Williams, five, had a tiny red rash behind his ear, but within an hour it had spread across his entire body.

Mum Carly, 30, watched as it turned into blisters and burns before her eyes, but she claims medics assured her by phone it was a simple “viral infection”.

She said: “It was the worst time of my life. We genuinely did think we were going to lose our son.

“He was a perfectly healthy boy and in the space of a few hours he was left fighting for his life.”

Ollie was put into a coma for two weeks while doctors battled to control the burns that spread across his face and body – even fusing his eyes shut.

“His whole skin from head to toe just blistered and fell off; the protective layers of his eyes, the bottom of his feet, even his fingernails came off,” said Carly.

The lad, who has an identical twin brother Jake, was “treated as if he had had acid thrown at him” and underwent skin grafts to save his life.

Ollie had contracted Stevens-Johnson syndrome, a rare disorder of the skin and membranes which is usually a reaction to a medication – including ibuprofen – or an infection.

Miraculously, two months on from the ordeal, the youngster is home but will be scarred for life.

Medics don’t know what triggered the attack, which also led to him having a collapsed lung and “twisted” heart, and left him unable to walk without a frame.

Mum-of-five Carly said: “Ollie was wrapped up like a mummy. 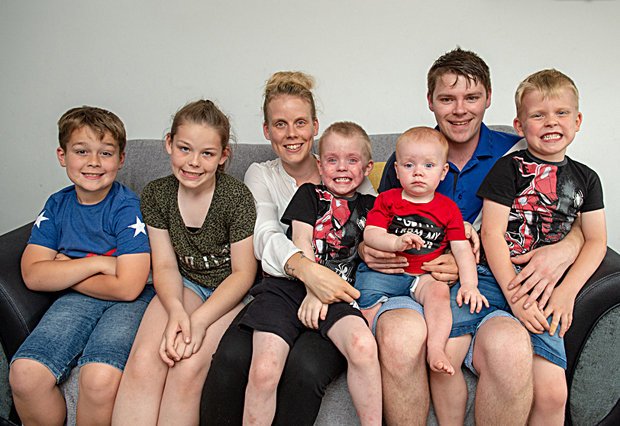 “They said they’d been told they would learn about it in a textbook but would probably never come across it.”

She and Ollie’s dad Kelvin took it in turns to be at his side in hospital while caring for their other children Courtney, 11, Archie, eight, Tommie, 11 months, and Jake.

While the youngster was in the coma, medics told his family to prepare for the worst.

He was then transferred 80 miles away to a specialist burns unit at Bristol Royal Infirmary. But while there he contracted sepsis, leaving him again fighting for his life.

Medics had to re-inflate his lung, twisting his heart before it thankfully managed to right itself.

Carly, from Newbury, Berkshire, added: “If it wasn’t for the doctors and nurses Ollie wouldn’t be here.

“I just want to raise awareness among parents. The syndrome can be brought on by ibuprofen and anyone can get it.

Ollie was finally discharged on May 29, but is still re-learning to walk with the help of a frame and weekly physio sessions.

Carly added: “It has been really tough. We genuinely did think we were going to lose our son. But I’m in awe of Ollie’s determination. He really is our miracle son.”