A boy in central China has sustained serious fractures after being kicked off a 3.3ft tall slide by another boy in a playground.

Five-year-old Yueyue was climbing up the slide and holding onto a handle near the top when one boy found him ‘blocking the way’ and kicked him in the torso.

Yueyue fell onto the ground and was taken to the hospital. He was found to have severe fractures on his left arm. 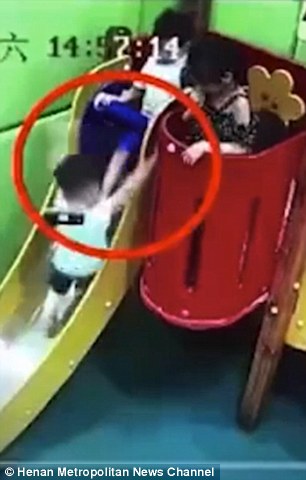 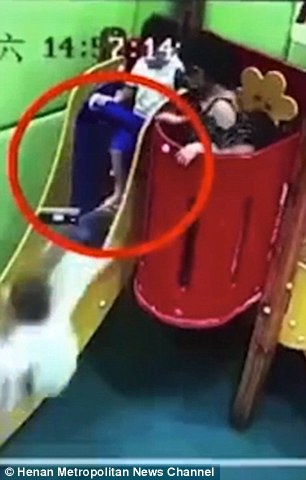 Yueyue is holding onto a handrail before a boy suddenly sends kicks towards him at a playground in China(left). He falls backwards and hit the ground (right)

The other boy’s mother apparently carried the child away from the playground – without apologising to Yueyue or his mother.

Yueyue’s mother, Ms Wang, has made an appeal on TV to look for the other boy and his family.

Surveillance camera footage at the playground in Pingdingshan, Henan Province, captured the moment Yueyue was kicked and hit the ground with backfirst.

The incident occurred at 3pm, July 7, when Yueyue and his mother had just finished lunch.

After Yueyue was kicked off the slide, Ms Wang bolted towards her injured son immediately and asked for the other boy’s parents.

Another woman can be seen running towards the slide and carrying her son away without saying a word.

According to Henan Metropolis Channel, Yueyue was admitted to a local hospital and later transferred to an orthopaedic hospital in Luoyang city.

Dr Wang Zhaoyin, a resident paediatrician, explained that Yueyue had fractures in the upper arm and an elbow dislocation. 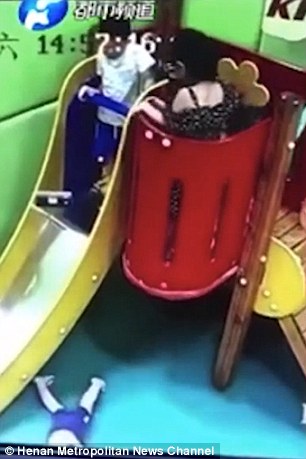 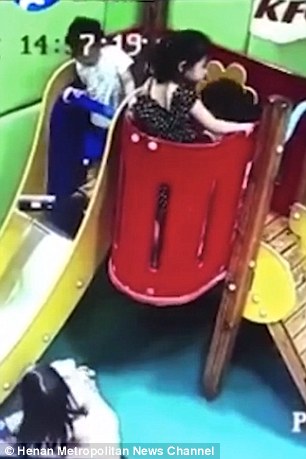 The five-year-old is left in agony with a dislocated elbow and fractured arm (left). His mother, Ms Wang, rushes to check his injury (right) 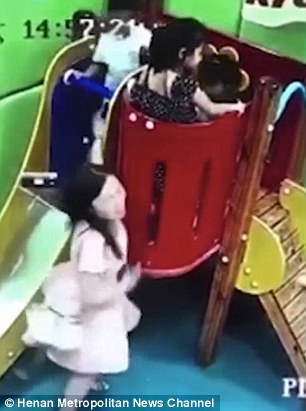 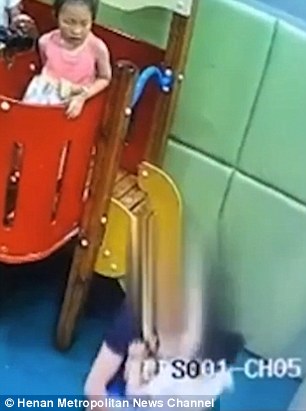 Ms Wang shouts and asks for the boy’s parent to apologise (left). A woman grabs her son away and flees the scene without saying a word (right)

However, Yueyue could not undergo any surgery as doctors found blood clots around the injured area.

The heartbroken Ms Wang had made an appeal on the interview looking for the other boy and his mother. She said she was looking for an apology.

‘If you treat your children dearly, I would do the same because no parents would like to see their children getting injured.

‘In this incident, I think you should come out and bear the responsibility,’ Ms Wang said.

Ms Wang has reported the incident to the police, but they have not found the boy or the mother.

Further investigation is being carried out.