A “passionate” Essendon supporter who unleashed a tirade of abuse and threats against Richmond player Dylan Grimes following a contentious 2020 game has been banned from attending similar matches after pleading guilty. 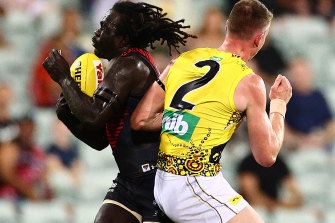 The free kick denied Essendon’s Anthony McDonald-Tipungwuti a goal. Mr Grimes was later accused of staging to get the free kick but was ultimately cleared of doing so by the AFL tribunal.

Frankston Magistrates Court heard Zammit, a father of four, also tracked down the work phone number of an AFL umpire and left a string of cryptic voicemail messages following his umpiring in an Essendon and Brisbane match the Dons lost 91-28 on July 31.

“Over the last 18 months … we’ve gotten used to sitting at home watching television, watching football. It’s not nearly as boisterous or as much fun as when you are there, but your frustrations and anger were totally misconceived,” Mr Pithouse said. 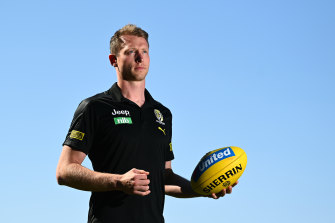 “There is a rule of thumb that my wife has taught me … that if you are going to send a sensational text don’t do it until the next day because 99 times out of 100 you won’t send it. When you do it on the spur of the moment it can only go downhill from there. And, boy, has it gone downhill for you.”

The court heard Zammit was working in a stressful occupational health and safety role during the COVID-19 pandemic, had a newborn child and was drinking excessively when he posted comments on Instagram photos belonging to Mr Grimes and sent the defender private messages in August.

Mr Schocker said his client had lost his job of more than a decade and had his working-with-children check removed as a consequence of his poor behaviour.

“Somewhat ironically, at one stage he trained to become an umpire for his children’s sport,” Mr Schocker said. “He is genuinely remorseful and sorry for what he has done.”

On Wednesday Zammit pleaded guilty to two charges of using a carriage services to menace. Charges of stalking were withdrawn.

Mr Pithouse spared him a criminal record, handing him to a 12-month good behaviour bond, without conviction, and ordering that he pay $1250 to the Frankston court fund.

The father of four is also prohibited from attending any Essendon and Richmond AFL games during that time.

“No one deserves to be treated in the manner that you treated those people,” Mr Pithouse said.

“The other thing is you don’t do your own club any good, Essendon, by being identified as an Essendon supporter stooping to such vile tactics. It’s unnecessary when your team at present seems to be speaking with their boots.”

Mr Zammit was one of two men charged with stalking Mr Grimes in the days after Richmond’s win over Essendon.

In December Essendon fan Andrew Alexander, of Mitcham, was also placed on a good-behaviour bond without conviction for six months and ordered to donate $1000 to a charity after sending a series of abusive emails to Mr Grimes and the winery the footballer runs with his wife.

Alexander was drunk when he sent the emails – which included threats that Mr Grimes was “f—ed” and “f—ing dead” – two nights after the game, a court heard.