Boy, 5, who was trapped in a burning building with his mother is saved by neighbours after the parent threw him out of a three-storey window

A young boy in China has been rescued by neighbours after his mother threw him out of a window while they were trapped in a blazing building.

Footage captures the heart-stopping moment the parent dropped the five-year-old from the three-storey flat before he was caught by the heroic residents with bedsheets.

The child is said to have survived unscathed. His mother was also saved after she climbed down to the second floor through a pipe and jumped onto the covers, reports said. 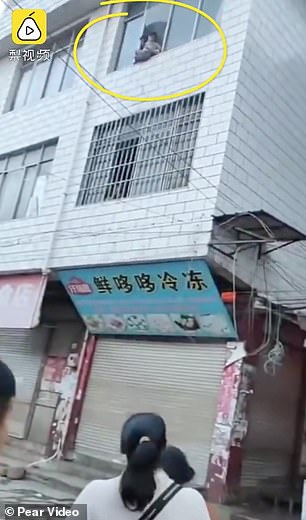 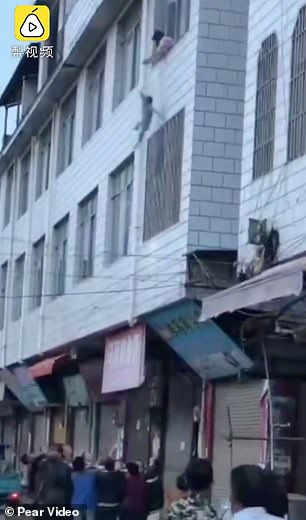 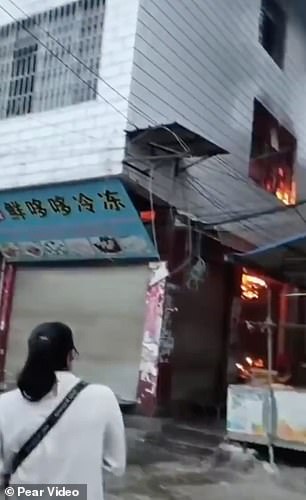 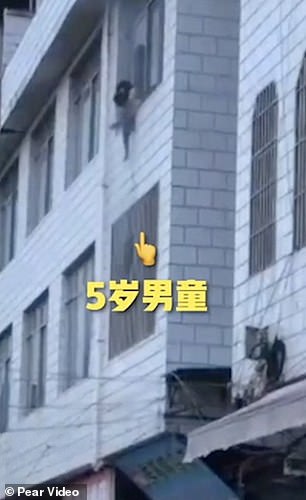 The incident occurred when the residential building in Yanshan county of south-western Chinese province Yunnan was caught on fire earlier today. The family was rescued

The incident occurred when the residential building in Yanshan county of south-western Chinese province Yunnan was caught on fire earlier today.

Footage shows the three-storey block being engulfed by flames and heavy smoke while the mother and son were stuck in a flat on the top floor.

They were unable to escape through the stairs as the blaze was swallowing the building, an onlooker told Pear Video.

A group of neighbours rushed to make a temporary rescue mattress by tying bedsheets together to save the family.

While the residents standing in a circle on the ground with the covers, the mother is seen holding her son by the window before dropping him in mid-air.

The boy then fell from the three-storey flat and safely landed on the bedsheets as onlookers gasped in shock.

After the child was rescued, the parent climbed down to the second floor from their home through a pipe built on the building’s exterior. She then jumped and was caught with the bedsheets.

Another little girl, believed to be the boy’s younger sister, was trapped on the second floor and rescued by the same method, one of the neighbours told reporters.

The children were said to have survived unhurt while the mother suffered minor injuries on her arms.

The fire has been put off after firefighters were called to the scene. An investigation of the incident is underway, reported Chinese media.