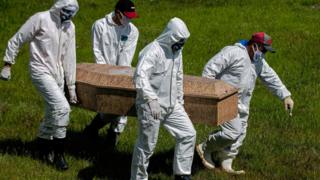 The ministry said it would only report cases and deaths in the past 24 hours.

Now Supreme Court Justice Alexandre de Moraes has intervened, telling the ministry to “fully re-establish” the publication of Covid-19 data in the interests of public health.

Brazil has the world’s second-highest number of cases, and has recently had more new deaths than any other nation.

The Latin American country has recorded more than 700,000 infections, but because of insufficient testing, the number is believed to be much higher. More than 37,000 people have died, the third-highest toll in the world.

Using data from alternative sources, Brazilian media outlets have started publishing their own coronavirus figures to keep the public informed.

They have criticised President Bolsonaro for his handling of the pandemic, during which he has opposed lockdown measures and downplayed the virus as “a little flu”.

On Tuesday, the president reiterated his threat to withdraw Brazil from the World Health Organization (WHO), accusing it of not acting responsibly during the pandemic.

Last week, Mr Bolsonaro branded the health agency a “partisan political organisation”, echoing comments made by US President Donald Trump, an ally of his.

What did the judge say?

In a statement, Mr Moraes said the health ministry must “fully re-establish the daily divulgation of epidemiological data on the Covid-19 pandemic”, including on its website.

The judge made the ruling on Monday night in response to a legal challenge from three political parties.

He said the health emergency in Brazil was so serious, it required all government agencies to “put into effect public health protection”.

The judge “highlighted the disastrous consequences for the population if internationally recognised measures are not adopted, such as the collection, analysis, storage and dissemination of relevant epidemiological data”.

Opposition senator Randolfe Rodrigue welcomed the decision. “The government will now be obliged to release the pandemic data, as before, without make-up or manipulation,” the senator wrote on Twitter.

What is the situation in Brazil?

Only the US has more coronavirus infections than Brazil, the most populous country in Latin America.

Health experts say infections are expected to rise even further, as the outbreak is still weeks away from its peak, putting more strain on hospitals.

Last month, Brazil’s death toll surpassed that of Italy’s, placing the nation third in the world, behind only the US and the UK.

Mr Bolsonaro has played down the risks of the virus, comparing it to “a bit of a cold”. Two health ministers have left the post since the outbreak began in disagreement with the president’s handling of the pandemic.

The president has continued to call for lockdown measures imposed by local authorities to be lifted, arguing that they will wreck the economy.

The president has also accused state governors and mayors of using the issue for political gain, as many who have taken stricter measures oppose his government.